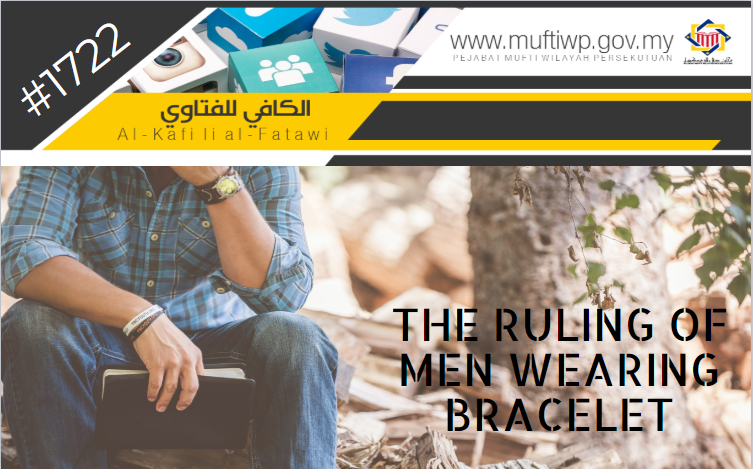 Assalamualaikum. What is the real ruling of men wearing bracelet? I once heard an ustaz said that there is an opinion from scholars which stated that it is makruh (undesirable) and not haram. Hope for an explanation.

The Prohibition Against Resembling the Opposite Gender

“(This curse) is on the acts of a man resembling a woman in terms of clothing and adornments especially head covering, necklace, bracelet, anklet and earrings.” (Refer ‘Umdah Al-Qari, Al-‘Aini 22/41)

It is clear in this hadith that it is haram for a person to wear or adorn with what is specific for the opposite gender.

It is stated in al-Mausu’ah al-Fiqhiyyah, there is no khilaf (difference of opinions among scholars) among the jurists on the prohibition of a man resembling a woman in terms of the body movements, mellowness of words, adornments and clothing and others which is specific for a woman in terms of the custom and naturally. (Refer Al-Mausu’ah al-Fiqhiyyah al-Kuwaitiyyah 11/267)

The Ruling of Men Wearing Bracelet

“What is this wrislet?” He said: “It is for Wahinah.” He said: “Take it off, for it will only increase you in weakness.”

Thus, it is clear from the above hadith where the Prophet PBUH instructed to remove a bracelet worn with the purpose and belief that it can cure or protect someone for it does not benefit nor prevent harm.

Syeikh Zakariyyah al-Ansari stated that it is permissible for a man to wear a silver ring to follow (ittiba’) the prophet PBUH, it is even sunnah, however, men are impermissible to wear bracelet (al-siwar) and it is impermissible for him, even if the bracelet is made of silver. The reason is wearing silver has feminine elements and it is not suitable nor it is becoming with the attributes of a man. (Refer Fatawa Hujjah al-Islam Abu Hamid al-Ghazali, pg. 30; Al-Majmu’ Syarh al-Muhazzab 4/444 and Asna Al-Matolib 1/379)

Ibnu Hajar al-Haitami stated that among the forms of resembling women is wearing adornments specific and customary for them such as bracelet and anklets, while wearing a ring is permissible for men. (Refer Al-Fatawa Al-Fiqhiyyah Al-Kubra, 1/261)

This is agreed by jurists of madhhab Hanafi where Imam Kamaluddin Ibn al-Hammam clearly said that it is impermissible for man to wear silver adornments except ring and al-mantiqah (belt) and adornments on a sword. The same opinion is stated by imam Ibn Qudamah al-Hanbali (Refer Syarh Fath al-Qadir 22/180 and al-‘Umdah fi al-Fiqh 1/37)

In short, the majority of scholars ruled it haram for a man to wear bracelet which represents the four main madhhabs in fiqh Islami and the opinion which ruled it permissible is irregular.

However, in this issue there are several exceptions issued by the Mufti’ Office of the state of Malacca and Negeri Sembilan on the permissibility of wearing bracelet or wristlet for men for medical or treatment purposes according to the necessity according to the conditions:

Furthermore, its ruling cannot be analogically deduced to be the same as wearing a watch for both its characteristics are different from each other and customarily accepted by the Muslim society that it is worn by both man and woman.