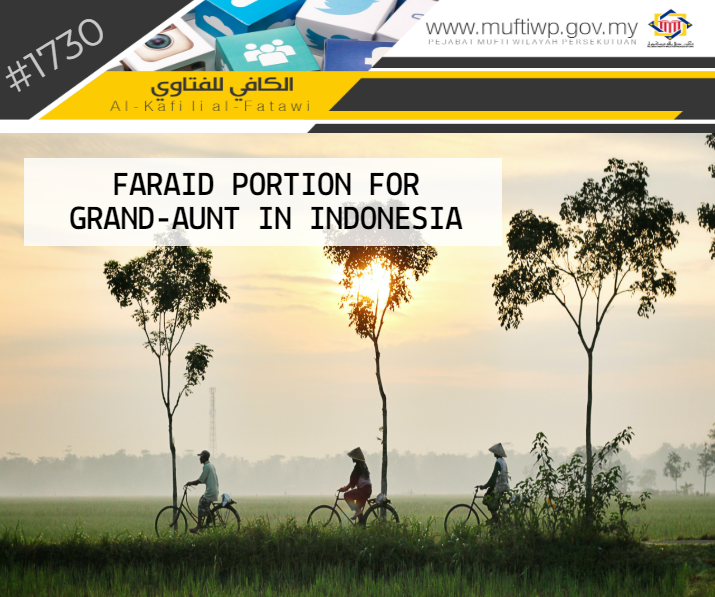 My grandmother owns a piece of land. She passed away and left one younger sister who lives in Jakarta, Indonesia, also two daughters; my mother and my aunt. Then, we got the news that the younger sister of hers in Indonesia passed away after her and leaves several numbers of heirs. My question is, is it wajib for my mother to give one-third of the price of the land to the heirs of my grand-aunt in Indonesia? When I went to the Land Administration Office, they informed me that my grand-aunt has the right of one third from it. Thank you.

According to the faraid, the portion for daughters is two-third of the inheritance. This is in accordance with the saying of Allah SWT:

But if there are [only] daughters, two or more, for them is two thirds of one's estate

“What is meant by the saying of Allah ‘more than two’ (فَوْقَ اثْنَتَيْنِ) is including two and more, according to ijma’. The phrase fauqa (more) to affirm the meaning.”

While for female siblings, they will get the remainder of the inheritance after the portion for the two daughters gets, which is one third. This is also said as asabah ma’a al-ghair (asabah due to other persons). This is because of the presence of the daughters.

The dalil of its sanctioning is the hadith of Abdullah bin Mas’ud RA that he ruled by the ruling of the Prophet PBUH:

Pertaining to the issue of whether there are differences if the heirs live in another country, the answer is there is no difference and it is still wajib for the inheritance to be given to the heir who lives in another country, within one’s capability, or the one who administers the inheritance should keep it until it is given to its rightful owner. If the heir already passed away, then it should be given to the heir of the heir.

Looking at the above facts and explanation, we are inclined to state as the following:

May this answer gives understanding to the one who asks. We pray that Allah SWT bless us with provisions which is halal and good. Ameen.