AL-KAFI #1731: PURIFICATION OF SWINE PLACENTA IN COSMETIC PRODUCTS THROUGH HYDROLYSIS 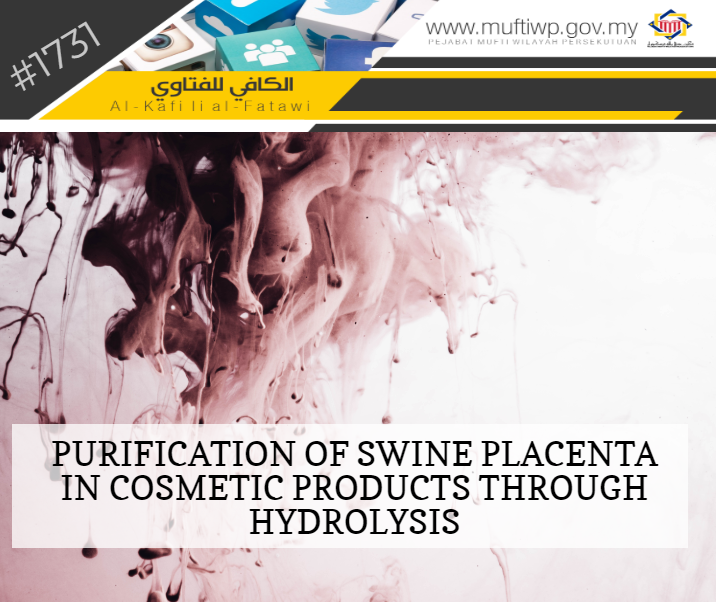 Hope for an explanation for the status of cosmetic products containing hydrolyzed placental protein from swine. Is it pure to be used or is it still impure even if the placenta has been processed through the process of hydrolysis?

According to the Fourth Edition of Kamus Dewan Bahasa, hydrolysis means “the chemical reaction when a compound reacts with water to produce another new compound.” In the current context, the hydrolysis process on swine-based products is for the purpose of extracting the protein which will be used in cosmetic products. This is a commonly used technique to extract gelatin from the flesh, bone and skin of animals like pigs, cows and fishes to produce food products, medications, cosmetics and others and not for the purpose of purification according to Shari’a rulings. Refer to the journal article Meeting the requirements of halal gelatin: A mini review by MedCrave.

“Khamar (liquor) transforms into vinegar naturally in its container. Skin which is mutanajjis due to death then is purified by samak the outer and inner layer and whatever transforms into animals”.

The example of what is transformed into animals is hookworms which come from faeces which is ruled as pure. Refer al-Minhaj al-Qowim (pg. 54) by Imam Ibn Hajar al-Haitami.

Pig is an animal which is prohibited to be eaten and its corpse is categorised as najis. Allah SWT says:

He has only forbidden to you dead animals, blood, the flesh of swine,

“The ummah has decided on the prohibition of the flesh of swine and its whole body. In the verse, it is mentioned that the phrase ‘flesh’ because swine is an animal which is slaughtered to take its flesh. …And swine fats are included under the meaning of the flesh of swine.”

The ruling of using swine-based products is also haram even if it is not to be eaten like using it on one’s body or clothes due to its status as a mughallazah (major) najis. Refer al-Majmu` Syarh al-Muhadzzab (4/46) by Imam al-Nawawi.

Exceptions are given in the case of treatment and medication when there is no other alternative except swine. So, it is permissible due in exigent situations. Refer Irsyad Al-Fatwa Series 376: The Usage of Implants Made from Swine for The Treatment of Glaucoma

Based on the above facts and explanation, we are inclined to state that cosmetic products containing hydrolyzed swine protein are haram to be used because it is najis mughallazah and is not used due to exigent situation. Wallahu a’lam.

May this explanation benefit the questioner. We pray to Allah SWT to give us provision from which are halal and good. Ameen.