AL-KAFI #1732: THE RULING OF DONATING BLOOD IN A NON-MUSLIM PLACE OF WORSHIP 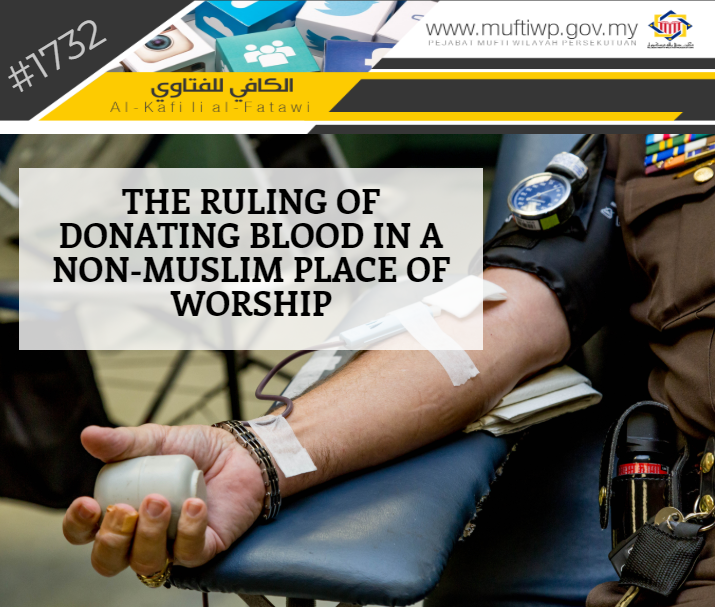 What is the ruling of donating blood in a non-Muslim place of worship?

Donating blood is permissible, even a Sunnah and a highly commendable act in Islam because it is an act of helping others towards righteousness. This is in accordance with the saying of Allah SWT:

And cooperate in righteousness and piety

Refer Irsyad al-Fatwa #276: The Ruling of Blood Donation; Al-Kafi li al-Fatawi Series 528: The Ruling of Receiving Blood and Organ from the Non-Muslim

In short, the final opinion in the madhhab al-Shafi’e is the ruling of entering the places of worship of non-Muslims is haram if one enters without permission when there are idols or pictures which are worshipped, or if entering the place honours the religion. Some scholars permit it even with the presence of idols and pictures on the condition of not worshipping their eminence or entering without permission.

This is in line with a hadith narrated from Abi Talhah RA, where the Prophet PBUH said:

"Angels (of Mercy) do not enter a house wherein there is a dog or a picture of a living creature (a human being or an animal).

Refer Al-Afkar #47: The Ruling of Toys as Ornaments for further explanation

Based on the above facts and explanation, we are inclined to the opinion that it is permissible for a Muslim to participate in the blood donation held at the non-Muslim places of worship because there is a need, on the condition of that it is done with permission as well as not following any ritual which is the eminence of the religion. The same is when the blood donation is not for the purpose of promoting the religion because helping towards disbelief is also a disbelief. It is best for a Muslim to donate blood in places which are away of any fitnah.

May this explanation gives understanding to the questioner. We pray to Allah SWT to accept all our good deeds. Ameen.