AL-KAFI #1742: THE RULING OF RECITING AL-QURAN FOR MORE THAN ONE DECEASED 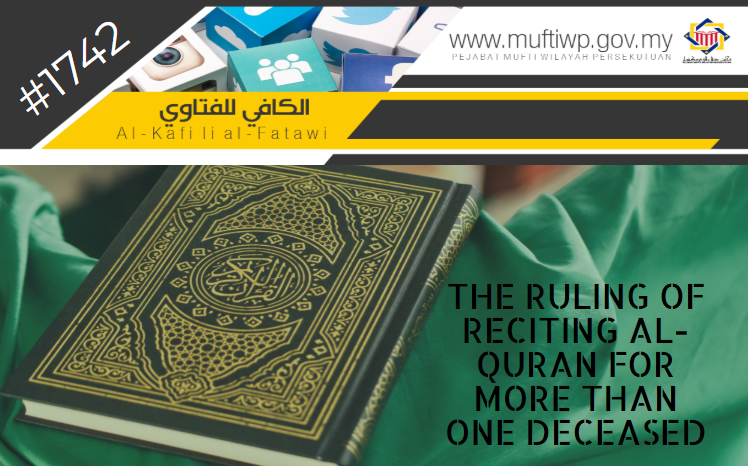 I would like to ask; is it permissible for us to recite al-Quran intending the reward for several people at the same time? Thank you.

The ruling of giving the rewards of one’s recitation of al-Quran to more than one deceased at the same time is permissible.

The ruling of giving the rewards of reciting al-Quran for a deceased already had been discussed several times before. Refer:

In conclusion, the act of giving the reward of reciting al-Quran for a deceased is permissible, in the form of du’a to Allah SWT to channel the rewards of the recitation to the deceased as what is acknowledged by Imam al-Nawawi.

When we accept the doing as a du’a, one of the ethics in making du’a is reciting it in general form or ta’mim. Imam Ibn Hajar al-Haitami said:

“It is Sunnah to make du’a in general form according to what is brought by al-Mustqghfiri: There is none loved by Allah more than the du’a from a slave, ‘O Allah, I ask of You to forgive the sins of Muhammad nation with a complete forgiveness’. In other narration: “That the Prophet PBUH heard a man said, “O Allah, I ask of You to forgive me,” then he said, “Curse on you. If you make your du’a general, surely, it will be granted”. In another narration, it is said that the Prophet pat the shoulder of the one who makes du’a, “Forgive me and bless me,” then the Prophet PBUH said to him, “You should make your du’a general. Indeed, between du’as which are general and specific is a gap between heaven and earth.”

While according to al-Mausu`ah al-Fiqhiyyah al-Kuwaitiyyah (13/20-21), the authors state that the scholars have decided on making du’a in general form is Sunnah, according to the saying of Allah Taala:

And based on a khabar:

“O Allah, I ask of You to forgive the sins of the Muhammad nation with a complete forgiveness”

And based on a saying of an A’rabi (Bedouin) where he said:

"O Allah! Bestow Your Mercy on me and Muhammad only and do not bestow it on anybody else along with us."

Then the Prophet PBUH said:

"You have limited (narrowed) a very vast (thing),"

Based on the above facts and explanations, we are of the opinion that the ruling of intending rewards of reciting al-Quran to more than one deceased is permissible due to taking the rulings of supplicating which is permitted or even encouraged to be made general, which covers all believing people. If making du’a for all Muslims is permissible, so does to a few people through qiyas (analogical deduction). Wallahu a’lam.

May this explanation gives understanding to the one who asks. Let us make du’a to Allah SWT to group us all among those who receive forgiveness and blessing from Him. Ameen.