AL-KAFI #1747: THE CONTRACT (AQD) OF MUSAQAH ON TAKING WAGE TO LOOK AFTER A DURIAN ORCHARD 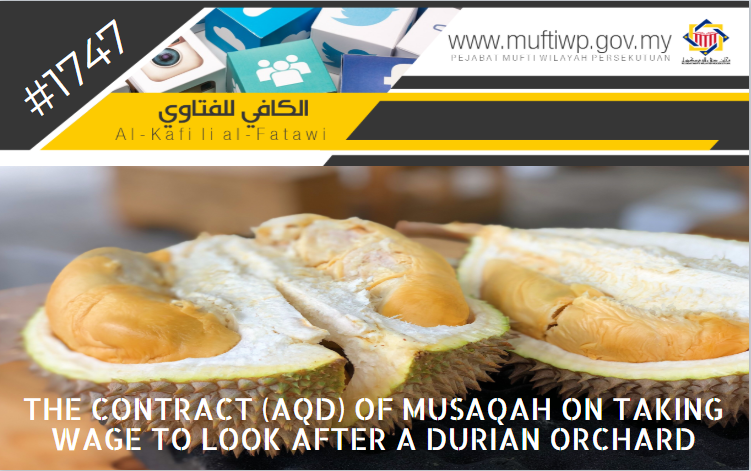 Assalamualaikum. I hire a worker to take care and look after my durian orchard at the village. The worker did not want to take wages from me, but said that when the durian bears fruit, he will sell them and the profit will be divided equally between us both.

My question is, is he rightful to sell and gain profit out of it?

Waalaikumussalam w.b.t. The above issue was discussed by the scholars in the chapter of Musaqah. Based on the above situation, the worker has no right to sell all durian and divide the profit equally from it unless he got the permission from the landowner.

This is because, basically, both parties; landowner and worker have rights upon the durian in percentage. In other words, after the plant grows and bears fruits, it should be divided between the worker and landowner based on the percentage and ratio decided together like 50:50, 60:40 and etc. After the division is done, it is up to each of them whether to sell, eat, or gift the durian to others.

Musaqah lexically means watering. While according to the technical definition, musaqah is a contract between the landowner and the second party who did the preserving, taking care of and all needed works. The fruits will later be divided among them.

In this matter, basically, the landowner gave his orchard for a person to look after it. In return, the fruits will be divided between both parties bound to the contract (aqd).

Aqd of Musaqah is sanctioned in Islam. It is permissible. This statement is in accordance with the hadith of the Prophet PBUH where he himself was involved in the said transaction. Among them is a hadith narrated by Ibn Umar R.Anhuma:

It is narrated by Ibn Umar R.Anhuma: “Indeed, the Prophet PBUH took wages from the people of Khaybar with the price of half of the production (the plant) collected like fruits and plants”

Among the wisdoms of Shari’a permitting such aqd is to protect human needs and necessity. There are several people who own lands and transformed them into gardens or orchards, but do not know or are too busy to manage it by themselves on daily basis. At the same time, there are a group of people who have the capability to manage the orchard. So, such aqd is to harmonise both categories of humans.

Besides, when a person relies totally on the aqd of ju’alah (wage) as normally applied, there is a possibility that after the aqd ends, the crops do not produce but wages are still needed to be paid. So, the landowner will face loss in his account.

Different from the aqd of Musaqah, the profit is divided by percentage. When fruit season comes but the crops do not produce, both parties will not gain anything because the loss is in both expenses; landowner because the cost of nurturing the crops will be incurred by him while the caretaker because he had put his effort into it.

Next, aqd of musaqah has five main pillars which are the transaction party (landowner and caretaker), sighah (ijab and qabul), the crops, production and job scopes. To ensure that this aqd is valid, all parties should abide by the requisites and conditions set.

The main requisites and conditions are the requisite of production and job scopes. Sheikh al-Zuhayli in his book, al-Mu’tamad (3/250-254) explained it as the following:

The fruits produced after a period of time of good care is the most suited gift for the caretaker aside of partnering with the landowner as the proprietor. Among the conditions to be abide by is for the production to be shared; the production should not only be owned by one party because such condition will tarnish the original objective of the aqd.

Besides, all parties should know clearly the portion to be gained by both parties based on the mutual agreement. The portion is decided by percentage, not in a specific number like 3kg durian and etc. This condition is put as a precaution if the crops do not produce or its production does not meet expectation.

The worker or caretaker should accomplish all works related to nurturing and preserving the orchard. As it is known, the aqd of Musaqah is only related to lands that already have crops and trees. The worker’s task is to ensure the continuity of the plants as well as ensuring that the crops are taken care of in good and ordered manner like watering it following the schedule, slashing the bushes, protecting it from being stolen and etc.

In addition, the aqd should have its expiration date based on the nature of the plant to flourish like 6 months, a year and etc. Aqd will become invalid when there is no stated period because if an aqd is left without an end, the worker will work as a landowner because he is alone in managing the land to an unknown date; it may reach to years.

As a conclusion and suggestion, it is best for each party to be clear first on each portion. Only then will the produced fruits be given to the caretaker as a proxy to sell it. The profit will be divided again based on the percentage and agreed portion.