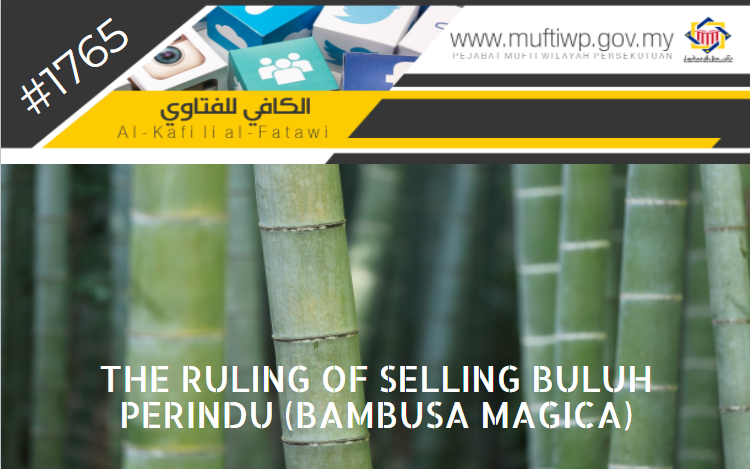 It is haram to sell buluh perindu online or even traditionally if the bamboo is used for the purpose of shirk like as amulet. However, if the bamboo is sold for other purposes like to make flute or ornament, then it is permissible.

Buluh perindu or its scientific name Bambusa Magica is a type of tiny bamboo that produces a sweet voice when blown by the wind. So, buluh perindu is always used as the flute. Besides, there is a Malay saying “Seperti bangsi buluh perindu” which means a sweet and soft voice.

The basis of the belief that an item may bring luck and fast-sell the business is shirk because people believe that there are other powers other than Allah. Therefore, shirk is considered a major sin.

"The biggest of the great sins are: To join others in worship with Allah...”

The original ruling of sales and purchase is permissible as long as there are no elements causing it to be haram or violate the conditions and requisites of the sales and purchase. There is a legal maxim that states:

To ensure that the sales and purchase are valid, it must fulfil all conditions and requisites of sales and purchase like buyer, seller, ijab and qabul as well as the item in trade. For the item in trade, Imam al-Nawawi in his book al-Majmu’ Syarh al-Muhazzab states that an item which is sold must be pure, may be benefited, known, can be received and owned by the buyer.

There are 5 conditions for the item in a sale which are pure, may be benefited, known, may be received and owned by a buyer in the contract (with the seller). (Refer al-Majmu’ Syarh al-Muhazzab 149/9)

Besides, there are fuqaha’ who said that among the conditions for items in the sale is not something prohibited by shara’ which implies the same meaning as mentioned by Imam al-Nawawi on that the item shall be pure and may be benefited. The prohibited items are items considered as najis like intoxicants, corpse, swine and items that lead to shirk.

Among the conditions of sales and purchase as stated by the fuqaha’: The item in the sale shall not be among those prohibited by shara’. (Refer Mawsu’ah Fiqhiyyah Kuwaitiyyah 140/3)

Sales and purchase of impure, najis and items prohibited by shara’ are haram in Islam. The Prophet PBUH said on the Day of the Conquest:

"God and His Messenger have declared forbidden the sale of wine, animals which have died a natural death, swine and idols.”

Ibn Batthal, Imam al-Nawawi and contemporary jurists when explaining this hadith states that the scholars decided on the prohibition of sales and purchase of items like idols because it is considered having the elements of shirk and this is considered as najis like corpse and intoxicants.

The scholars have decided that it is haram to sell and purchase corpse and idols because it is not halal to be taken benefit from. (Refer Syarh Sahih Bukhari Ibn Batthal 360/6)

Al-Qadhi said that the content of this hadith means whatever not halal to be eaten and taken benefit from is prohibited to be sold or purchased and it is not halal to take its wages. (Refer al-Minhaj Syarh Sahih Muslim 8/11)

The meaning from this hadith is the prohibition of sales and purchase of items used in shirk actions, whatever the intention might be and upon whichever the item is, be it a statue, idol or the cross. So, these all is wajib to be thrown away and banished. (Refer Mawsu’ah Fiqhiyyah Kuwaitiyyah 139/3)

The reason for the prohibition of sales and purchase of items with shirk elements is because shara’ considers it has no benefit as well as leads to shirk.

And the reason for the prohibition of selling and buying idols is because it has no permissible benefit and it leads to shirk. So, it is haram to sell and buy it. (Refer Fiqh Tajir Muslim pg.199)

We would also like to call the Muslims to avoid matters which may lead us to shirk whether by selling or buying because shirk is a major sin that calls the wrath of Allah. We also would like to advise the Muslims to always make sure our source of income is halal and free from any haram elements as stated.