AL-KAFI #1769: THE RULING OF THE GROOM’S FATHER BECOMING THE WAKEEL (PROXY) TO HIS SON DURING AQAD (SOLEMNISATION). 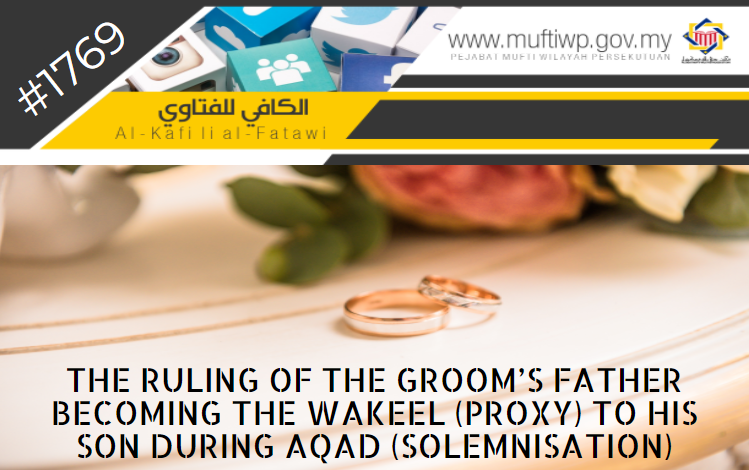 Assalamualaikum ustaz. Is it permissible for the groom’s father to become the wakeel (proxy) to pronounce the ijab and qabul during the solemnisation ceremony?

The ruling of a father acting as the proxy to his son to pronounce the solemnisation is valid and permissible. However, it is obligated for the father to state in the ijab and qabul that he accepts the nikah as a representative to the groom only. Example of the saying, “I accept the nikah of fulanah for my son’s hand”.

The process of marriage is something serious and important to be looked upon; starting from choosing the partner, solemnisation to the married life. A marriage that is encouraged in Islam shall be based on Shari’a.

A marriage that is valid and complete shall fulfil all requisites and conditions, which are:

Sighah means words or actions delivered to the person in aqad (contract) to indicate his consent. The jurists are of the opinion that items in sighah shall be ijab (offer) and qabul (acceptance).

Solemnisation is invalid unless by sighah of aqad nikah which are ijab and qabul. Originally, sighah only involves two parties which are the groom and wali only. The explanation:

However, if the groom or the original wali appoints another person to fulfil the obligation of pronouncing ijab and qabul, so the ruling is still valid; whether they are in the same ceremony or far apart.

This is based on the doing of Prophet Muhammad PBUH who appointed another person to accept the marriage of his wife. Among them, Rafi; a servant of the Prophet PBUH narrated, he said:

“Appointing a matter to others in matters possible to be appointed to others, done during alive, is valid like the contract of sales and purchase, nikah and others.”

Therefore, it is permissible to appoint others to fulfil the obligation of ijab and qabul; especially when the groom is located far from the solemnisation place and the like.

However, bear in mind that the appointee is obligated (wajib) to pronounce himself accepting the aqad as a proxy to the groom. The example for this saying: “I accept the nikah of fulanah in the place of fulan” or something similar due to that marriage is a critical issue and any ambiguity, as well as misunderstanding, shall be avoided.