AL-KAFI #1785: IS TRUE THAT A CAT MAY HELP ITS MASTER ON THE DAY OF JUDGEMENT? 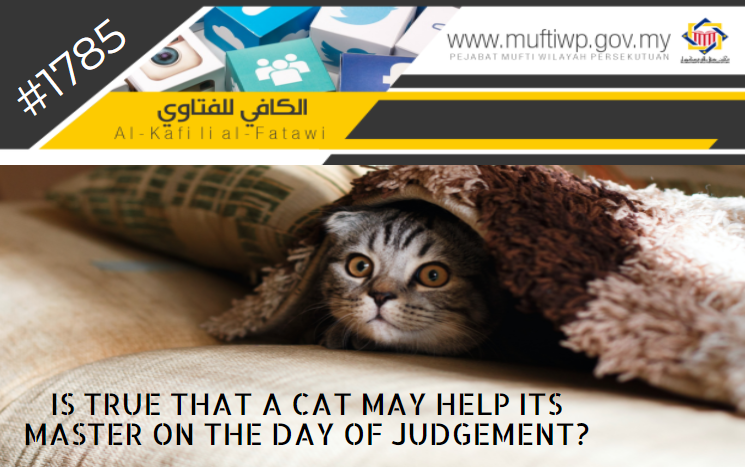 Assalamualaikum Datuk Mufti. I read in a posting on cats on social media. The statement in the posting stating that:

“No wonder the Prophet PBUH loves cats. On the day of judgement, there is a special level for animals. They queue up waiting for their turn. Under them are humans who are also waiting in line to cross a bridge. What do the animals do?

They ask Allah’s permission to help the people who helped them while they were alive on earth.”

Hope for an explanation from the Mufti. Thank you.

There are no specific nas and dalil on the position of animals like the cats on the day of judgement especially in helping the people who helped them while they were alive. However, the Muslims are commanded to do good towards all creations the same as when Allah SWT obligates us to do good towards everything because each goodness done in this world are promised with rewards that will help us to enter Paradise on the Day of Judgement.

Verily, the Day of Judgement is among sam’iyyat which are the unseen matters and are not reachable to the intellect of a human unless there is an explanation on it from the texts of al-Quran and al-sunnah. The same goes for the chronology of the Day of Resurrection which will happen later, it is told to us that verily, all creations ever alive on earth will be resurrected on the Day of Judgement to be questioned and judged. Allah SWT says: [1]

On the Day when Allah will resurrect them all and inform them of what they did. Allah had enumerated it, while they forgot it; and Allah is, over all things, Witness.

So, based on the above discussion and argument, there is no specific dalil stating that cats or any other animals are given a special and specific place to help humans on the Day of Judgement. Conversely, animals are resurrected to fulfil the claim and rights among creation as mentioned by the Prophet PBUH narrated by Abu Hurairah RA: [2]

“Rights will certainly be restored to those entitled to them on the Day of Resurrection, (to the point that) even the hornless sheep will lay claim upon the horned one.”

Based on the narration, Imam al-Nawawi states that animals will be resurrected on the Day of Judgement the same as those obligated with taklif (imposed with duties) which consist of the sons of Adam and the jinn. However, he further explained that animals are resurrected to fulfil the right of qisas among them like in his commentary: [3]

However, this does not deny virtue and advantages in doing good upon animals because Islam commands its ummah to do good upon all creations and each good deed will be rewarded. This is based on the narration from Syadad bin ‘Aus: [4]

Verily Allah has enjoined goodness to everything

There is also a hadith stating that a woman’s sins are forgiven because she fed a thirsty dog with water. This story may be pondered through the hadith narrated by Abu Hurairah RA where the Prophet PBUH said: [5]

A prostitute saw a dog moving around a well on a hot day and hanging out its tongue because of thirst. She drew water for it in her shoe and she was pardoned (for this act of hers).

Based on the above dalil and arguments, doing good among creations is promised with rewards on the Day of Judgement, and even with blessing and mercy of Allah SWT, may lead us to Paradise through our feeling of ihsan upon animals. Therefore, we shall be cautious about making any statement involving the virtues of something so that it does not contradict al-Quran and al-Sunnah.

There are no specific nas and dalil on the position of animals like the cats on the day of judgement especially in helping the people who helped them when they were alive. However, the Muslims are commanded to do good towards all creations like what Allah SWT obligates us to do good towards everything because each goodness done in this world are promised with rewards that will help us to enter Paradise on the Day of Judgement.

May we always be steadfast in doing good as well as good deeds among creations on this earth.