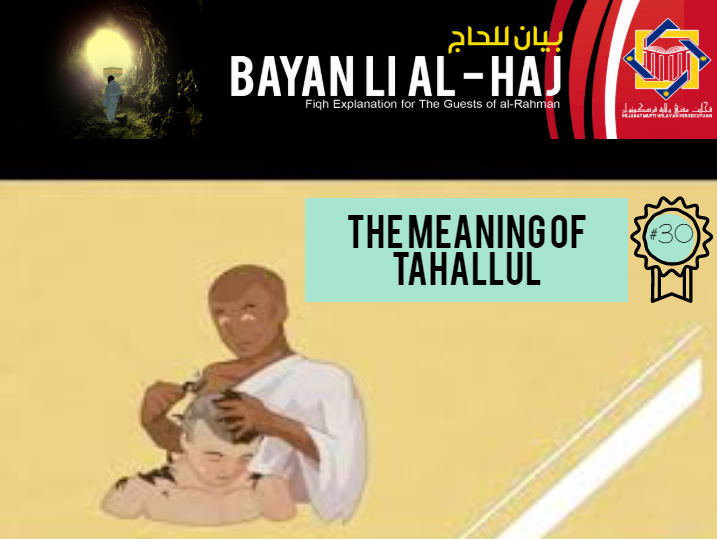 What is the meaning of tahallull and the difference between tahallul for hajj and umrah?

Tahallul literally means making something lawful or permissible. According to syarak, the term tahallul means freeing oneself from the prohibitions of ihram.

Tahallul for umrah is where the pilgrims are to shave or cut their hair after the requisite of sa’ie inside al-Haram mosque itself. Hence, directly after tahallul, the pilgrims are free from all the prohibitions of ihram.

First, tahallul awwal is performed when two of the following three acts of hajj is completed:

For tahallul awwal, the pilgrims are given a choice of performing any of the above actions in their order or otherwise.

Second, tahallul thani is when a pilgrim has completed all three of the stated above actions.

“Certainly, has Allah showed to His Messenger the vision in truth. You will surely enter al-Masjid al-Haram, if Allah wills, in safety, with your heads shaved and [hair] shortened, not fearing [anyone].”

For hajj and umrah, there is a difference between the guidelines of tahallul. Tahallul for hajj is only complete (tahallul thani) when all three matters stated above are completed. While for umrah, tahallul is automatic when one shaves or cuts his hair for umrah. Hence, every pilgrim for hajj and umrah should know and learn regarding the matters related to tahallul to ensure that we are not among the people who will be fined with dam for those who violate the set guidelines.

Lastly, let’s pray that we are distanced and protected by Allah SWT from things that He has prohibited and lived in His blessings. Ameen.