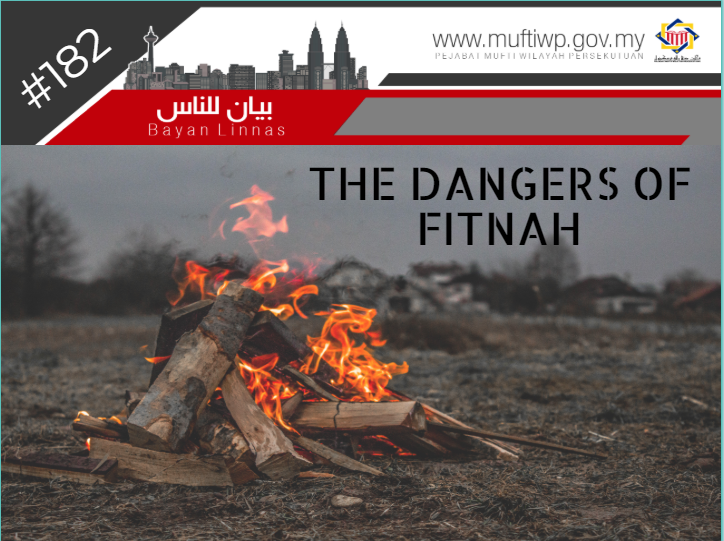 Recently, there are various shocking news published through social media, all of which the validity of the articles is uncertain. This is a worrying matter for it could lead to disunity and disharmony among people in general and particularly towards the Muslim ummah itself. Hence, our religion has set several guidelines for us in our daily interactions and how we should respond in such situations. Thus, we are called to write an article in our Bayan Linnas section titled “The Dangers of Fitnah”. May Allah SWT save us all from any form of fitnah (fitnah).

Fitnah originated from an Arabic word which has several meanings. Among them are stated by al-Azhari, Ibn Faris and Ibn Manzur as having the meaning of ibtila’ or test. (See: Tahzib al-Lughah, 14/296] (See: Maqayis al-Lughah, 4/472)

Ibn Athir further added that the word fitnah is originally used by the Arabs to describe a test, but it is subsequently famously used as a word to define disbelief, killing, and fire. (See: al-Nihayah, 3/410)

On another hand, fitnah is a term which has several meanings depending on the situation in which it is used in. Ibn Hajar stated:

“Indeed, fitnah usually made to change (something) and make up stories.” (See: Fath al-Bari 27/3)

In the Malay language, the word fitnah has a specific meaning. It refers to any claim or accusation made to disgrace, dishonor, humiliate, or harm someone or a certain party that will lead to misfortune. (See: Kamus Dewan Edisi Keempat). According to the definition, it is clear that fitnah is sinful and prohibited. The act of fitnah is criticized by the Prophet PBUH in a hadith narrated by Huzaifah RA, where the Prophet PBUH said:

“The tale-bearer shall not enter Paradise.”

Imam Nawawi said: In another narration, the word قتات is mentioned. This also means slanderer. The meaning of نَمَّام as defined by the scholars is conveying people’s words either from an individual, or a crowd from one side to another in the intention of creating enmity between them. Al-Imam Abu Hamid al-Ghazali Rahimahullah said in his book, (Ihya’ Ulumuddin): Know that the attributes of a slanderer mostly associated with the person who transmits statements from a person to another, like one says, ‘A said and criticized you like this and that’. (Refer al-Minhaj Syarh Sahih Muslim, 2/112)

It is also including writings that are spread through mass media and so on.

The Characteristics of Fitnah in Today’s World

Today, fitnah is easily spread compared to in our previous time. The reason is, with the advancement of technology in telecommunications, any information can be circulated with ease. Fitnah can happen in two types of situations:

First, when someone make up stories about a person and spread it to others with the intention of dishonouring or disgracing the person.

Second, when someone receives news about a person and spread it to others without first verifying the information, with or without the intention of disgracing the person.

Both situations are considered as fitnah and it is a prevailing problem in today’s society. For example, Kasim made up a story stating that Harun committed adultery with his girlfriend and the story is published in his blog with the intention of humiliating and disgracing Harun. Then, Abu read the post and he shared it through his Facebook account without any intentions of disgracing Harun for he is just conveying a message, but he did not verify whether the story is true or false. In this situation, both Kasim and Abu have committed fitnah for they have acted as a tale-bearer towards Harun.

With the advancement of technology in this era, it is undeniable that every form of information can be delivered and spread easily through Whatsapp and the internet. However, other conventional media are just as effective in the widespread of false stories and fake news such as inaccurate news articles published in newspaper and television outlets, presumptuous sermons, thoughtless gossip in restaurants and coffee shops and imprudent conversations between co-workers. All of these media are still the preferred method to spread fitnah for it can easily form a perception of the people without needing to verify or validate the information.

Factors that Contribute to the Dissemination of Fitnah

There are several factors that contribute to the dissemination of fitnah depending on whether he is the one who makes up the stories or just a person who spreads the news. For a person who makes up stories, there are several possible reasons, such as competing to win a certain status or position, domination in business, political agendas, or envy towards another person. Basically, it all stems from a problematic and dirty heart of someone who does not have a firm belief in Allah SWT. Indeed, shaytan will never stop in his purpose to create animosity and conflict between humans. This is in accordance with the statement of Allah SWT:

“Satan only wants to cause between you, animosity and hatred,”

Although this verse intended upon the gamblers and intoxicants, but shaytan itself intended to create hatred and animosity between humans. It is due to the fact that general saying is taken into account rather than its generic cause of revelations.

Thus, fitnah is one of the beloved acts of shaytan for it will divide the Muslims and cause disunity among them.

For the category of people who spreads fitnah, the main factor for their actions is their carelessness in receiving and conveying the news that they heard without first validating it. This type of person is described by the Prophet PBUH as a liar. In a hadith from Abu Hurairah RA, the Prophet PBUH said:

“It is enough of a lie for a man to narrate everything that he hears.”

Furthermore, the act of spreading some news without first verifying it is rebuked by Allah SWT in the case of the fitnah towards Sayyidatina Aisyah R.Anha, where Allah SWT states in surah al-Nur:

Indeed, those who came with falsehood are a group among you. Do not think it bad for you; rather it is good for you. For every person among them is what [punishment] he has earned from the sin, and he who took upon himself the greater portion thereof - for him is a great punishment. Why, when you heard it, did not the believing men and believing women think good of one another and say, "This is an obvious falsehood"?

Syeikh al-Maraghi said: Do not think that false news contains only evil and wickedness. Instead, it also holds some goodness, for you may receive great rewards (for being patience). This is because, false news is a clear test to show the glory one has in front of Allah SWT according to a verse revealed and widely read upon on freeing oneself from fabricated news: on the accused’s glory, a warning to those who said bad things to others, a praise for those who always have positive thoughts for others, as well as other religious and ethical rewards of those who take lessons.

Then, Allah SWT also explains the punishment of those who spread the fabricated news; all of them will be punished with punishments in accordance with their doings. (Refer Tafsir al-Maraghi, 9/4730)

The Punishment for Fitnah

In the Quran, Allah SWT states the punishment for fitnah in surah al-Nur:

“Indeed, those who like that immorality should be spread [or publicized] among those who have believed will have a painful punishment in this world and the Hereafter. And Allah knows and you do not know.”

Imam Ibn Kathir commented on the above verse stating, the verse is describing those who hear some false news, then convey it and spread it to others. (See: Tafsir al-Quran al-‘Azim (10/195))

The same stated in a hadith from Samurah bin Jundub RA, where the Prophet PBUH said:

“The angel that was escorting the Prophet PBUH said; A man is punished with an iron hook pierced through his cheek straight into and through his neck for his work is to spread lies from early morning to every corner of the earth.”

In another hadith from Abdullah RA, the Prophet PBUH said:

Imam al-Nawawi commented on the above hadith stating that the extremists meant in the hadith are those who transgress in their speech. (See: Syarh al-Nawawi ‘ala Sahih Muslim (16/461))

The Opinions of Scholars Regarding Fitnah

The following are the opinions of scholars regarding fitnah:

The Effects of Fitnah

Acts of fitnah will have negative and detrimental effects on society and the country. Some of them are as the following:

Among the steps that could be taken to protect yourself, your family and the society from fitnah are as the following:

And the record [of deeds] will be placed [open], and you will see the criminals fearful of that within it, and they will say, "Oh, woe to us! What is this book that leaves nothing small or great except that it has enumerated it?" And they will find what they did present [before them]. And your Lord does injustice to no one.

Al-Sobuni said: The records (of deed) will be given and presented upon them. During that, you will see them be fearful of their sins and wrongdoings. (Refer Sofwah al-Tafasir, 2/1748)

Imam al-Suyuti said: This hadith reminds people to increase and hasten in doing good deeds before turbulences and busyness occur due to a large number of fitnah swaying us consecutively like the darkness of night with no moon. The Prophet PBUH also says this as a test, which a Muslim in the evening may turn kufr by morning and vice versa. (Refer al-Dibaj ‘ala Muslim, 1/134)

Alhamdulillah, according to our above statement, we will like to reiterate that we should avoid any form of fitnah and realize that our brothers are a part of ourselves. Fitnah is asleep as being mentioned by the Prophet PBUH:

“Fitnah is asleep. Allah SWT curse those who wake it up”

In countering fitnah, one should stay close to Allah and always whispers prayers to Him. Hereby, we state some ma’thur supplications of the Prophet PBUH (supplications based on transmitted reports) upon facing fitnah, among them:

'O Allah! Indeed, I ask of You, the doing of good deeds, avoiding the evil deeds, and loving the poor. And when you have willed Fitnah for your slave, then take me to You, without making me suffer from Fitnah.'

"O Allah, we make Thee our shield against them, and take refuge in Thee from their evils."

“O Allah, You are my `Aḍud and You are my Helper, and by You do I fight (Allāhumma anta `aḍudī, wa anta naṣīrī, wa bika uqātil).”

"There is no deity except You; exalted are You. Indeed, I have been of the wrongdoers."

"O Allah! Thy mercy is what I hope for. Do not abandon me to myself for an instant, but put all my affairs in good order for me. There is no god but Thou."

Hence, as long as we love our brothers, then Allah SWT will love us. May Allah SWT place us among those who enter His paradise. We will end this article with the following supplication:

Our Lord, make us not [objects of] trial for the wrongdoing people. And save us by Your mercy from the disbelieving people."