BAYAN LINNAS SERIES 225: COVID-19: LATEST FATWAS RELATED TO THE SUSPENSION OF THE FRIDAY AND CONGREGATIONAL PRAYERS 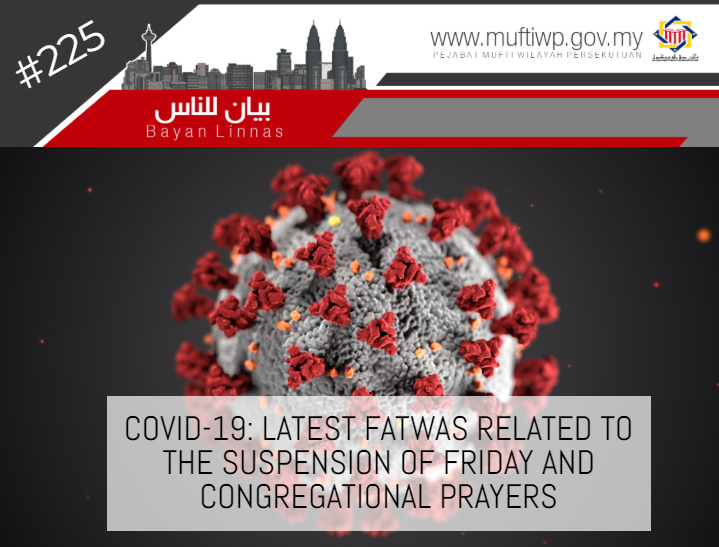 We have been following and keeping track of the issue on the spread of COVID-19 pandemic worldwide. Thus, we have already presented our advice standpoint in the previous series of Bayan Linnas. Kindly refer to Bayan Linnas Series 221: Our Mauqif (Standpoint) on Novel Coronavirus (2019-nCoV) and Bayan Linnas Series 224: COVID-19: Our Advice

The spread of this contagious disease sparks a polemic and questions in our society. At the same time, as a precaution measure, the Ministry of Health has issued a news statement dated 11th March 2020, they urge the public to; [1]

Hence, from the above request and advice, another issue arises and that is on the ruling of performing Friday and congregational prayers in our current critical situation as it involves mass gathering and social distancing cannot be maintained.

The following are the fatwas:

A meeting of the Malaysian National Committee of Islamic Religious Council was held on 15th March 2020 at Pulse Grande Hotel, Putrajaya. The decision of this meeting was presented to the Royal Highness, Yang di-Pertuan Agong, Al-Sultan Abdullah Ri’ayatuddin Al-Mustafa Billah Syah, the sultans and kings of the states to ask for the Royal consent to take next action.

From the discussion of the Muzakarah, the Committee has decided that all mosque and surau’s activities including the Friday and congregational prayers are suspended for the period of ten days starting from 17th -26th March 2020. In this period, masjid and surau authorities are advised to perform the proper cleaning and sanitization. Whether the suspension period of ten days’ period are to be continued or not is according to the advice and view of Ministry of Health (MOH).

Al-Azhar’s Council of Senior Scholars (ACSS) in an official statement on 15th March 2020 has decided on the permissibility to suspend Friday and congregational prayers in all areas due to the spread of the COVID-19 pandemic. In that statement, the ACSS has set guidelines that it is permissible for a country (daulah) to suspend Friday and congregational prayer for a temporary period as it may lead to the spread of this contagious disease.

Besides, the ACSS also remind the public on three important matters:

In a statement from their official website dated 14th March 2020, IAMS urges the public to temporarily suspend the Friday and congregational prayers in countries with cases of virus COVID-19 outbreak.

In that statement, IAMS has presented clear syara’ evidences which indicate that Friday and congregational prayers in the times of harm and danger is not wajib and is not permissible. In fact, what is more worrisome is when congregational prayer is performed, each person must stand in saff and touch each other’s shoulders. Hence, this would result in a high-risk situation for the disease to spread.

Therefore, IAMS calls for the temporary suspension of the Friday and congregational prayers in countries infected by the COVID-19 pandemic. This suspension will go on until the pandemic can be managed according to the decision of the authorities.

The Fatwa Council of the United Arab Emirates lead by Syeikh Abdullah bin Bayyah has issued fatwa on the permissibility to suspend Friday and congregational prayers during the COVID-19 pandemic outbreak.

By using the obligation of obeying the rulers (ulil amr) as the dalil, he states in his fatwa some guidelines as follows:

On 12th March 2020, Kuwait Ministry of Awqaf and Islamic Affairs has issued a decision to suspend Friday prayer and sermon due to the outbreak of COVID-19 in the country. This is decided after considerations were made regarding how a mass gathering will lead to the risk of infection towards the public. It is a proactive and cautious initiative step taken by the ruler to prevent the pandemic from getting spread in the country.

Hence, the obligation of Friday prayer is lifted in this country, the same for congregational prayer, which should be replaced by Zuhr prayer. Besides, the public is prohibited to enter the mosques to protect them from the pandemic. While pertaining to adhan, the addition of “صَلّوا فِى رِحَالِكُم” is permissible according to a hadith narrated by Ibn Umar.

Mufti of Republic of Tunisia, Syeikh ‘Uthman Battikh has issued a fatwa to suspend all congregational prayer including Friday prayer on 14th March 2020 to prevent the spread of COVID-19 pandemic. He stressed out on the religious commandment which touches on the importance of preserving our health and protecting ourselves from contagious disease as well as not purposely placing ourselves in danger.

Syrian Ministry of Awqaf and Sham Scholars Union have issued an order of suspending Friday prayer and sermon as well as congregational prayer in mosques throughout Syria. This suspension started on 15th March to 4th April 2020, only the adhan is called for the five daily prayers. The same for all related-activities to it like religious classes and gathering in groups in every masjid.

Majlis Ugama Islam Singapura informed the temporary closing of mosque in Singapore for 5 days starting from 13th – 27th March 2020 as a cleaning process to prevent the spread of the COVID-19 pandemic. MUIS in their statement through the official website states that:

“According to the dalil and religious principle above, the Fatwa Council is of the opinion that mosque authorities are responsible to ask and prevent any congregation who have the symptoms to not enter the mosque compound, either to perform salah or other affairs. This is because their presence may cause virus infection and lead to harm towards the mosque and the community. The public benefit of the congregation is in need to be taken care of and preserved.

The Fatwa Council also is of the opinion that if the spread of COVID-19 pandemic worsened and become more critical which leads to closure of public places including place of worship like mosque, or if it is necessary to limit public participation to public places like mosque, then it is an exigent situation. Therefore, the Fatwa Council is of the opinion that the closure of mosques in this particular situation, or suspension of congregational prayer including Friday prayer throughout this period is permissible.”

The above are fatwas issued by international fatwa institutions on the suspension of Friday and congregational prayers in some countries. If we see it closely, the evidences used in issuing these fatwas are based on certain points.

Among them is the obligation of preserving one of the Maqasid Shari’ah which is the protection of life (hifz al-nafs). It is haram for a person to intentionally throw himself in the destruction by not taking the preventive measures set. This is in accordance with the saying of Allah SWT:

“And do not throw [yourselves] with your [own] hands into destruction [by refraining].”

The same for an Islamic legal maxim which states that each action by the ruler upon the subject is bound to the maslahah.

The actions by a ruler upon his subject are bound to the maslahah (Refer al-Asybah wa al-Nazair Lissuyuti, 121)

The reason is if mass gatherings are allowed to take place, then the risks of harm increase and this would lead to harm and destruction, while the principle in Islam is to avoid or prevent harm. This is in accordance with the following Islamic legal maxims:

There should be no harm nor reciprocating harm

Therefore, each order and command from the authority is wajib to be followed and abide by according to the saying of Allah SWT:

O you who have believed, obey Allah and obey the Messenger and those in authority among you. And if you disagree over anything, refer it to Allah and the Messenger, if you should believe in Allah and the Last Day. That is the best [way] and best in result.

If you get wind of the outbreak of plague in a land, do not enter it; and if it breaks out in a land in which you are, do not leave it.

If we look back through history, this step was also taken by the Companions to prevent the contagious disease from being spread. When there is an outbreak of the plague in the city of Amawas, Sayyidina ‘Amr al-‘As quarantined and brought those infected with the disease to the mountains and secluded them from the healthy society until there is a way out of the outbreak. This is stated by Ibn Athir in his book, al-Kamil fi al-Tarikh:

That Sayyidina ‘Amr ibn al-‘As went out with a group of people that are infected with the plague in the city of Amawas at the mountains, until Allah SWT lift the disease from them. What was done by Sayyidina ‘Amr al-‘As reached the caliph of that time; Sayyidina Umar al-Khattab RA, and he did not refute it. (Refer al-Kamil fi al-Tarikh Li Ibn al-Athir, 2:377)

In a hadith narrated by Abu Hurairah, where the Prophet PBUH said:

“and one should run away from the leper as one runs away from a lion,”

In another hadith, the Prophet PBUH also said:

“Do not put a patient with a healthy person,”

We hope that this can be a guidance for the public especially those who are learning, to do research on the evidences and arguments used by international fatwa institutions in issuing the ruling.

In our current situation, one of our effort is by employing the method of prevention is better than cure, like the Arabic poem which states:

Prevention is better than cure

We should take this chance to perform congregational prayer at home together with our family to build a strong and solid family institution by sharing some advice after performing salah or reading simple religious books as a learning time about the religion in our homes.

Lastly, let’s repent and do istighfar to Allah SWT together as well as performing salah and sabr (patience). Let’s make du’a so that Allah SWT protect our country from this dangerous pandemic outbreak so that we can have a healthy, safe and peaceful life.

In the Name of Allah with Whose Name there is protection against every kind of harm in the earth or in the heaven, and He is the All-Hearing and All- Knowing),'