IRSYAD AL-HADITH SERIES 117: THE STATUS OF THE HADITH “RECITE YAASIN FOR THOSE WHO ARE DYING” 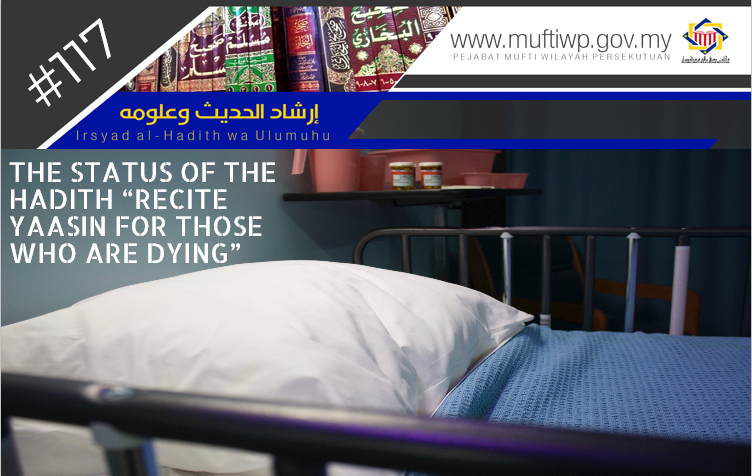 What is the status of the hadith “Recite Yaasin for those who are dying,”?

The Text of the Hadith (Matan)

Status of the Hadith

Among the opinions of scholars regarding the hadith:

Imam al-Hafiz Ibn Hajar state that there is a hadith in Musnad Imam Ahmad of which the sanad is hasan. [See al-Isobah, 5/249], from Safwan RA:

The syeikhs told me that they were visiting Ghudhaif bin Harith ats-Thumali when he was dying, then he said: “Is there anyone among you who would want to recite Yasin?” He (Safwan) said, then Salih bin Syuraih al-Sakuniy recite it (Yasin) and when he was reciting verse 40, Ghudaif passed away. He (Safwan) said: “The syeikhs said: “When it is recited to a dying person, surely, Allah SWT will ease him for the recitation.” [Musnad Ahmad, no. Hadith 16355]

According to Syeikh Syu’aib al-Arnouth when he was revising the book al-Azkar written by Imam al-Nawawi, the phrase “إِذَا قُرِئَتْ عِنْدَ الْمَيِّتِ خُفِّفَ عَنْهُ بِهَا” is mawquf because it is a phrase from Ghudaif RA and Ghudaif is a companion of the Prophet PBUH. As for al-Masyakhah in the syawahid it means a person who is among the companions of the Prophet PBUH and the great tabi’n for these people will not say anything based only on their opinions (especially in terms of religion). Thus, the ruling for it is marfu’. [See al-Azkar, 144]

The Meaning of “عَلَى مَوْتَاكُمْ”

Scholars have differing opinions in understanding the words or phrase in the hadith whether it means to recite Yasin to those who are dying or those who have passed away.

Some scholars hold the opinion that reciting Yasin for those who have passed away is a mustahab matter for those who understand the meaning of the hadith is for the deceased. As for reciting the Quran in graveyards, it is a khilaf matter where some scholars ruled it permissible while others ruled it otherwise.

To conclude, whoever holds onto this hadith, then it is sunnah for them to recite Yasin to those who are dying or who has passed away, although there are differences in understanding the meaning of this hadith. Furthermore, there are no prohibitions on a Muslim to recite the Quran and gift the rewards to the deceased. The reason is it has been stated in evidences presented by scholars that the deceased will receive the rewards according to the general evidence in regards to the issue of whether the deceased will receive the rewards. Lastly, may Allah SWT grant us guidance in everything that we do. Amin.