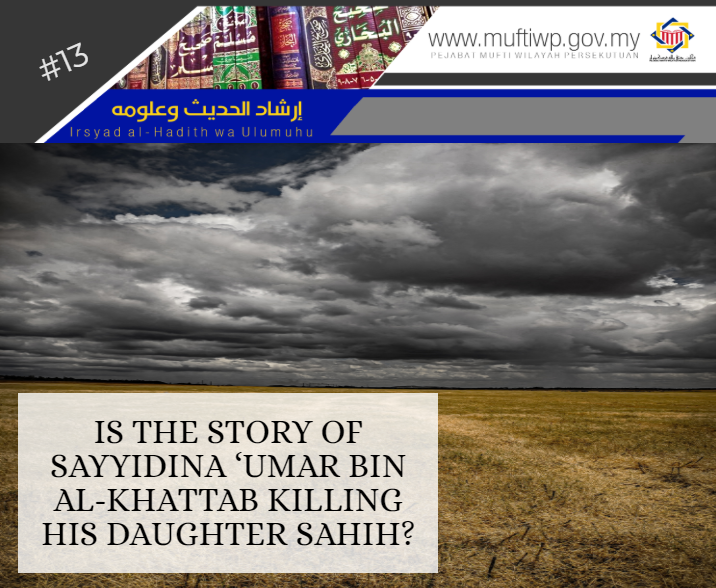 One of the famous stories among the Muslim community is the story of the second Caliph of Muslims which is ‘Umar bin al-Khattab who buried his daughter alive during the Jahili period. This story is fake and is not found in any narration of accredited Muslim scholars and intellectuals. Among the indications which prove the fabrication of this story is a hadith.

Meaning: Narrated from ‘Umar bin al-Khattab RA, “he was asked on the verse which states ‘And when the girl [who was] buried alive is asked. For what sin she was killed?’ (Surah al-Takwir: 8-9). Sayyidina ‘Umar bin al-Khattab answered: “Qais bin ‘Ashim came to the Prophet PBUH while saying: ‘O Messenger of Allah, indeed, I once buried my daughter alive during the Jahili period’. Then, Prophet Muhammad PBUH said, ‘Set free a slave for each daughter you buried alive as the atonement of your sins.’. Qais bin ‘Ashim said: ‘I have a camel’. The Prophet PBUH said: ‘If you want, give sadaqa by slaughtering one camel for each daughter you buried alive’.”

(Musnad al-Bazzar, 1:60 and Majma’ al-Zawaid, 7:283, Imam Haithami said: The narrators of al-Bazzar are those of the al-Sahih except Hussain bin Mahdi al-Ailiy, but he is a thiqah; trustworthy person)

Referring to accredited and affirmed history books on Sayyidina ‘Umar, we do not find any story as stated in the above question. This hadith clearly states that Sayyidina ‘Umar answered the question on the atonement for those who bury their daughters alive without saying that he also buried his daughter alive during the Jahili period. Hence, the story which narrates Sayyidina ‘Umar buried his daughter alive is fake and a fabrication made by the enemy of Islam. In conclusion, the story cannot be spread except to explain and highlight its fabrication. We advise Muslims to always refer to the original and authentic source before we convey anything to others.

Lastly, may this enlightenment give us a better understanding of the sirah and history of the Companions RA. Amin.