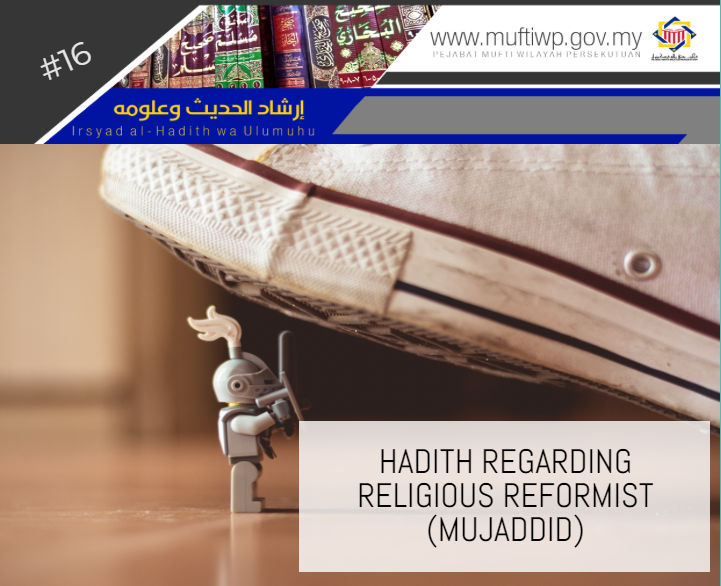 This hadith is very famous and often heard when people talk about transformation. It is something that even scholars wrote when deciding who is considered as mujaddid or reformist. This famous hadith is narrated by Abu Hurairah RA, where the Prophet PBUH said:

“Indeed, Allah SWT would send in every hundred years a person who would renew this religion (from deviance),”

From this hadith, we may understand that Allah SWT will raise someone in a community every hundred years a person who will help the community, preventing the community from straying and deviating from this religion while at the same time preserving the holiness of this religion from elements that are able to taint its purity. Hence, each Muslim who has true faith should believe in this hadith.

The meaning of al-Tajdid or reformation is restoring and re-evaluating Fiqh, iman (faith), amal (practice) and da’wah (preaching) through new and innovated ways in accordance with the current situation as long as it does not contradict with the Quran and the Hadith. For that, the meaning of tajdid is not creating new matter or religion as claimed by some individuals.

If we look back to the times of the Companions, tabi’in and generations after them, we may see that during that time, in understanding the nas (syarak evidences), the elements that are considered are celebrating and easing of matters as well as an openness in finding the compatibility with the maslahah and needs of the time.

The Meaning of “مَن” in this hadith

The scholars and intellectuals when commenting on this hadith hold the opinion that the phrase “man” (من) is “isim mausul” (اسم موصول) which brings the meaning of itlaq/absoluteness (إطلاق) whether it is an just one individual or more than one. This is because, there are people who said that only one person will be the reformist for each hundred years. The opinion which states that the phrase “man” indicates more than one person is supported by several famous scholars of hadith, among them are:

We already stated that the scholars differ on stating the meaning of the phrase ‘man’ in the hadith. Therefore, we are of the opinion that ‘man’ in this hadith means more than one person as what is understood previously and now.

Lastly, may Allah SWT protect us and our family from every fitnah that befalls the Muslims. Amin.