IRSYAD AL-HADITH SERIES 17: WHO IS IMAM AL-DARIMIY AND A BRIEF INTRODUCTION OF HIS SUNAN? 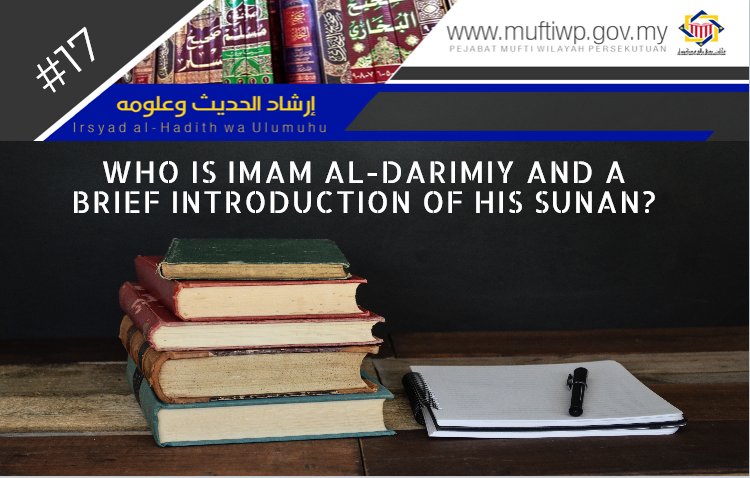 Assalamualaikum. Can you explain about Imam al-Darimiy?

Sometimes, when we read books on hadith, we would find narrations from al-Darimiy in his Sunan. Thus, it is best if we learn more about this scholar and his methodology in producing his writings briefly:

His name is Abu Muhammad Abdullah bin Abdulrahman bin al-Fadhl bin Buhram ad-Darimiy as-Samarqandiy. Al-Darimiy refers to al-Darim, Uzbekistan. He was born in the year 181 Hijrah and died on the Marwa hill on the day of Tarwiyah. He was buried on Arafah day which falls on a Friday of 255 Hijrah.

Al-Darimiy was blessed with intellect by Allah SWT, he is a critical thinker with a great memory especially in memorizing hadiths. During his lifetime, he always travels in search of knowledge across the globe. Among the destinations which he visited are Egypt, Syria, Iraq, al-Haramain which are Mecca and Medina in Saudi Arabia.

Imam al-Darimi learn from great and renown scholars. He had numerous teachers, among them are:

In this matter, he also has numerous students who studies under him as well as narrated hadiths from him, among them are:

Opinions of Scholars About al-Darimiy

The Status of Sunan al-Darimiy

Al-Ala’iy said: Sunan al-Darimiy is not included in as-Sunan al-Arba’ah in terms of its status but is made as the fifth book, and sunan al-Darimiy is far superior than Sunan Ibn Majah. Due to this, some scholars make is as one of the books of al-Kuttub al-Sittah replacing Sunan Ibn Majah. In it, there are hadith mursal (there is no mention of any Companion in the sanad), Munqati’ (the sanad is broken), Mu’dhal (two or more narrators are missing) and Maqtu’ (discontinuous text of the hadith).

The Advantages of Sunan al-Darimiy

To conclude, Imam al-Darimiy is one of the hadith scholars which has greatly contributed in the knowledge of hadith for the Muslim ummah and to this day his works are referred to and placed in Muslim libraries. May Allah SWT bless him. Amin.