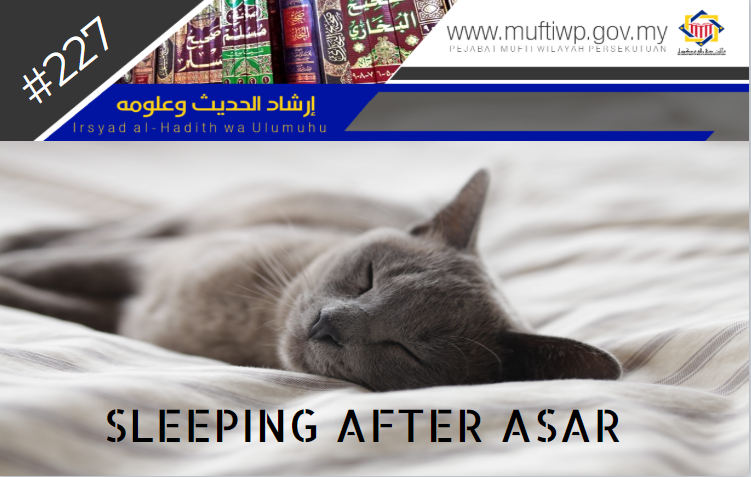 “Whoever sleeps after Asar then loses his mind, then he should not blame anyone except himself.”

Indeed, Allah SWT created each human or his body in need of sufficient sleep. Sleep is one of the ways a person rests his body. This matter is stated by Allah SWT in His holy book:

“And made your sleep [a means for] rest.”

Imam Ibn Kathir when commenting on the above verse said, sleep severs any actions with the purpose of resting oneself from moving a lot, walking and handling daily matters of life during the day. (See Tafsir Ibn Kathir, 307/8)

According to the above question, here we include several opinions of scholars in determining the status of this hadith:

According to the above opinions of scholars, we understand that some scholars ruled the hadith as dhaif (weak) and others said the hadith is fake. Thus, in our opinion, the hadith is very weak for there is a narrator in its sanad who is accused to be a liar. Hence, we would like to state that there is no sahih hadith that prohibit or restrict sleeping after Asar. However, if it is said that sleeping after Asar would make a person loses his mind according to tajrubah (experience) and this could lead to harm, then it is best if this is avoided for every individual should avoid from getting himself into harm. Furthermore, if a person needs to sleep during this time, then it is permissible.

To conclude, Allah SWT makes sleep as a means for us to rest for during the day humans are busy working in order to seek sustenance. Thus, sleeping at night would revitalize him to work the next day and the same applies for those who work at night. The reason is without sufficient sleep, then all other efforts planned to be done the following days would be delayed. Regarding the ruling of sleeping after Subuh, we have answered it in Irsyad al-Fatwa Series 149. Lastly, may Allah SWT makes us from among His slaves whose physical and spiritual are healthy in order for us to continue in our daily lives. Amin.