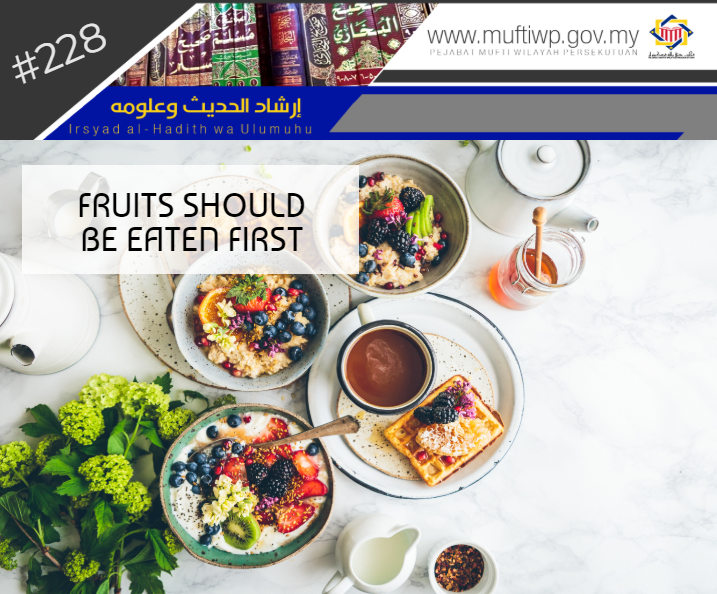 Is there a hadith narrating that fruits should be eaten first?

According to the above question, we did not find any sahih and clear hadiths which encourages a person to first eat fruits before eating other food. However, this matter is stated by previous scholars:

“The encouraged order of eating is to first eat the fruits for it is in line with the field of medicine. Furthermore, it (fruit) is faster to be digested, thus it is better to first fruits so that it will be at the bottom of the stomach (compared to other food). In the Quran, there are several reminders to first eat the fruits.” (See Ihya’ ‘Ulum al-Din, 16/2)

“This hadith is evidence that it is encouraged to first eat fruits before bread, meat and others.” (See al-Minhaj Syarah Sahih Muslim, 213/13)

Moreover, some scholars used the above verse of the Quran as evidence that it is encouraged to first eat fruits before other food:

“And fruit of what they select. And the meat of fowl, from whatever they desire.”

Commentary scholars such as Imam al-Qurtubi commented on these verses saying that in paradise there are numerous fruits and every resident in paradise is free to choose the fruit he so wishes. (See Tafsir al-Qurthubi, 204/17). Furthermore, this verse shows that Allah SWT first narrates the verses about the fruits before the meat of the fowl.

Among the wisdoms on why fruits are first mentioned in this verse is stated by Syeikh Wahbah al-Zuhaili in his commentary where the arrangement of the verse is more suitable, it travels down faster (to the stomach), efficiently digested, better in terms of health, increase the desire to eat and so that the human body is prepared to accept food. (See Tafsir al-Munir, 249/27)

In our opinion, eating fruits before eating other food is scientifically proven to have positive effects on the digestion of food in the stomach. Furthermore, this matter is also stated by scholars such as the above statement of Imam al-Ghazali and Imam al-Nawawi.

In conclusion, we would like to reaffirm that there is no hadith that shows the Prophet PBUH encourages us to first eat fruits when eating. For this, we are prohibited from ever saying that it is sunnah for there is no hadith which stated it as such. Lastly, may Allah SWT give us the understanding in religion and beneficial knowledge. Amin.