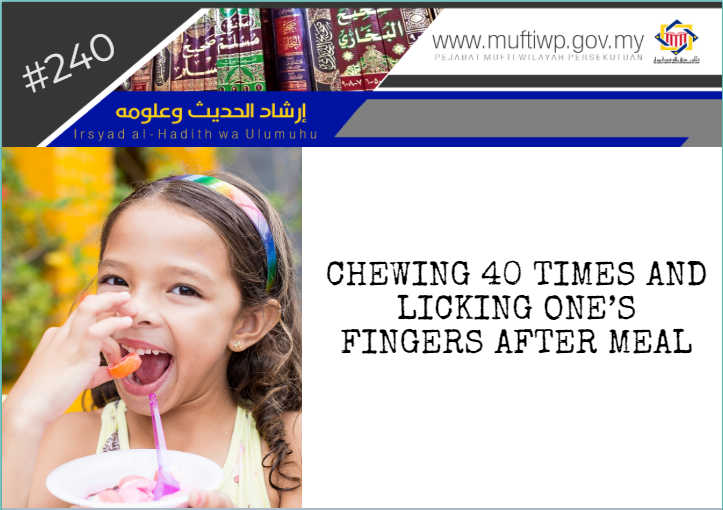 Is the claim that it is sunnah to chew 40 times when eating true?

Regarding the above question, we will answer it with the answer given by Imam al-Nawawi Rahimahullah when he was asked a similar question of whether it is true that the Prophet PBUH asked us to chew our food before we swallow when we are eating.

Imam al-Nawawi answered it as the following:

“There is no hadith that state this. However, if the purpose of it is for something good and it is the appropriate and polite way of eating with others with the purpose of teaching manners, or if the food is chewed multiple times for he is weak or if someone is full but if he stops eating the person eating with him will also stop but the person is still hungry or other situations with good intentions.” (See al-Manthurat, 104)

However, in regards to licking one’s fingers after a meal, it is stated in an authentic hadith:

“When one of you eats, he must not wipe his hand till he licks it, or gives it to someone else to lick (such as a wife, husband, etc.).”

There is a restriction from the above hadith from washing or cleaning one’s hands until he licks his fingers first. If he does not do so, then (he should not clean his hands) someone else should lick it where the person is not disgusted by the action, such as the wife, slave, child and servant who loves him. (See al-Minhaj Syarah Sahih Muslim, 206/13)

Among the wisdoms of licking one’s fingers after eating is stated by Imam Badr al-Din al-‘Aini who cited a hadith from Abu Hurairah RA, where the Prophet PBUH said:

“When any one of you eats food, he should lick his fingers, for he does not know in what part of the food sticking to his fingers the blessing lies.”

Furthermore, he also explained the order of which one should lick his fingers, where he should start with his middle finger, then his index and lastly his thumb. This is in accordance with the actions of the Prophet PBUH, as narrated by Imam al-Thabarani:

To conclude, we would like to reiterate that chewing for 40 times before swallowing is not a sunnah and is not supported by any authentic evidence according to syarak as stated by the fatwa issued by Imam al-Nawawi. However, if it is for good purposes as stated in the above discussion then it is permissible. Furthermore, licking one’s fingers after a meal is a sunnah as stated in the above authentic hadiths. Lastly, hopefully, this short explanation will give us understanding and benefit us all in our religion which will ultimately lead us to the eternal paradise of Allah SWT in the hereafter. Amin.