IRSYAD AL-HADITH SERIES 254: QARIN FROM AMONG THE JINN? 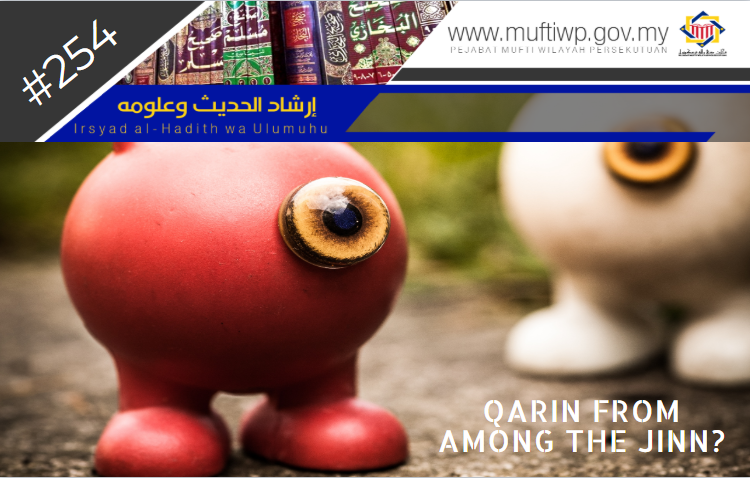 Assalamualaikum. What does this hadith mean?

“There is none amongst you with whom is not an attaché from amongst the jinn (devil). They (the Companions) said: Allah’s Messenger, with you too? Thereupon he said: Yes, but Allah helps me against him and so I am safe from his hand and he does not command me but for good.”

Every human who is born on this earth will have a qarin from among the jinn together with him as stated in the above sahih hadith. The role of the qarin is to encourage people to do something, whether it is something good or otherwise. Among the evidences which prove the existence of qarin are:

And his companion, [the angel], will say, "This [record] is what is with me, prepared."

His [devil] companion will say, "Our Lord, I did not make him transgress, but he [himself] was in extreme error."

Imam al-Qurthubi (671 H) when commenting on the above verses said that the qarin meant in the first verse (which is verse 23) is an angel sent for him according to the opinion of al-Hasan, Qatadah and Dhahhak. Whereas, the qarin in verse 27 is shaytan who is sent by Allah SWT to the sinful slave, where the shaytan frees itself from the actions (leading the slave astray) and deceits. (See Tafsir al-Qurthubi, 16-17/17)

The Status and Meaning of the Hadith

This hadith narrates the matters pertaining to the qarin of which is a sahih hadith narrated by Imam Muslim (261 H) in his Sahih. Furthermore, this hadith is placed in the books on the attributes of the Hereafter, Paradise and Hell.

Imam al-Nawawi (676 H) said the word “فَأَسْلَمَ” with the letter mim read with a front or above diacritic symbol (sign) are both famous narrations. Whoever reads it with a front diacritic sign, it means that the Prophet PBUH is protected and saved from the harms and fitnah of the Prophet PBUH’s qarin. While when read with the above diacritic sign, it means the qarin has embraced Islam and thus do not encourage the Prophet PBUH except only towards good deeds. The scholars have differing opinions as to which is more accurate between the two. According to al-Khattabi (388 H), the sahih opinion is the above diacritic symbol and this is the chosen opinion (by al-Qadhi and al-Nawawi) according to the statement of the Prophet PBUH, “he does not command me but for good,”. The scholars also differ on the narration which is read with the above diacritic sign saying “أَسْلَمَ” means surrendering (اسْتَسْلَمَ) and obedience (towards Islam). There is another narration, apart from the narration in Sahih Muslim where it came with the word “فَاسْتَسْلَمَ”. It is also said that it means the qarin has become a Muslim who believes and this is what is apparent. Al-Qadhi said, it should be known that this ummah has agreed on the maksum (protection) of the Prophet PBUH from shaytan from its physical body, whispers and tongue. The hadith also signals us to be careful of the fitnah, doubts and deviance (deviating humans) of the qarin. Thus, we should distance ourselves from these matters to the best of our abilities. (See al-Minhaj Syarah Sahih Muslim, 157-158/17)

We are inclined towards the opinion held by al-Qadhi and al-Nawawi where they state that the qarin of the Prophet PBUH embraced Islam. This is specified for the Prophet PBUH and not for anyone else. Furthermore, qarin is from among the jinn as stated in the hadith of which some of them are good and some are bad. This is according to the statement of Allah SWT:

To conclude, scholars have two differing opinions in understanding the meaning of the word “فَأَسْلَمَ” as stated above. However, as a Muslim who declares his faith, we should always be careful of the encouragements of our qarin (the shaytan). The reason is the role of this qarin is to encourage humans towards evil and bad deeds. Thus, we are commanded to seek the protection of Allah SWT from their whispers and encouragement of shaytan by increasing the recitation of isti’azah which is by reciting “أعوذ بالله من الشيطان الرجيم” as encouraged and taught to us by the Prophet PBUH. This has also been stated by Allah SWT:

From the evil of the retreating whisperer - Who whispers [evil] into the breasts of mankind - From among the jinn and mankind."

Lastly, may Allah SWT always protect and safeguard us as well as give us the strength to control our weak selves from the whispers of shaytan and ultimately bless us with a good ending of our lives. Amin.