IRSYAD AL-HADITH SERIES 256: DIVORCE WILL SHAKE THE ‘ARASY AND IS HATED BY ALLAH SWT 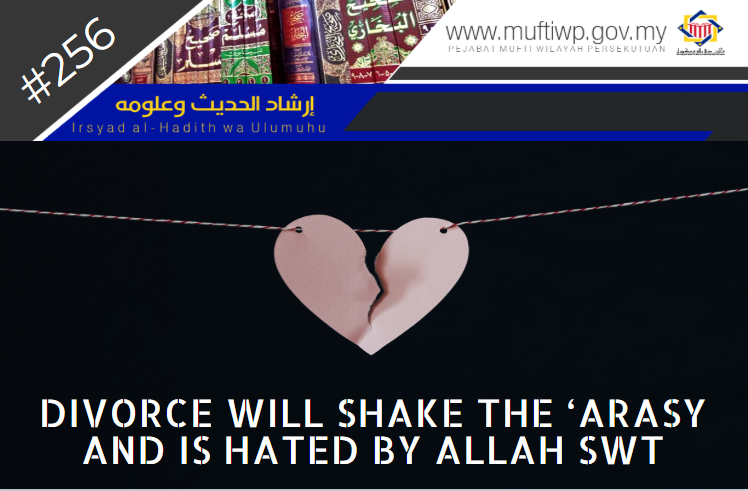 Assalamualaikum. What is the status of this hadith?

“Marry and don’t get a divorce. Indeed, divorce will shake the ‘Arasy,”

The purpose of marriage is to live a life of a married couple for both the husband and wife. Furthermore, Allah SWT has sanctioned various rulings and manners to maintain and preserve a marriage. However, it is natural in the lives of a married couple where both or one of them would not follow these guidelines and where it will result in talak or divorce due to certain circumstances of which it is also one of the matters that is sanctioned by Allah SWT. Among the evidence of the sanctioning of talak (divorce) is:

“Divorce is twice. Then, either keep [her] in an acceptable manner or release [her] with good treatment.”

According to the above question, here we include several opinions of scholars regarding the status of the above hadith:

After analysing the above opinions of scholars regarding the status of the hadith, we are inclined to state that the hadith is unauthentic and we should never say that it is from the Prophet PBUH nor should we convey it to others unless to state that it is a fabrication.

On another hand, there is another famous hadith which states:

“Of all the lawful acts the most detestable to Allah is divorce.”

“This hadith is narrated by Abu Daud and Ibn Majah. It is ruled as sahih by al-Hakim. However, Imam Abu Hatim stated that it is mursal. Likewise, al-Daruquthni and al-Baihaqi also said that this hadith is mursal.” (See Subul al-Salam, 247/2)

Furthermore, Syeikh Syu’aib al-Arna’outh when evaluating this hadith in Sunan Abu Daud stated that its narrators are thiqah (trustworthy). However, the sahih opinion among the imam state that this hadith is mursal and this is also our chosen opinion in determining the status of this hadith.

This hadith shows that there are matters which are permissible but are hated by Allah SWT and the most hated permissible thing is talak. It means that although talak is sanctioned, it does not bring about rewards from Allah SWT nor does it bring the doer closer to Allah SWT. Other scholars gave another example of something which is permissible but disliked by Allah SWT is the fardhu prayer not performed at the mosque (for men who did not perform the congregational obligatory prayers at the mosque) without any excuse permitted by syarak. This hadith is also an evidence that one should avoid from getting a divorce if there is a choice (if one can avoid from having to do so – as a last resort). (See Subul al-Salam, 247-248/2)

To conclude, although syarak sanctioned a husband to divorce his wife for certain reason, however, it is best to first find a better resolution for the issue and divorce is made as the last resort. May Allah SWT bless us all with righteous husband or wife so that our marriages will last until we die. Amin.