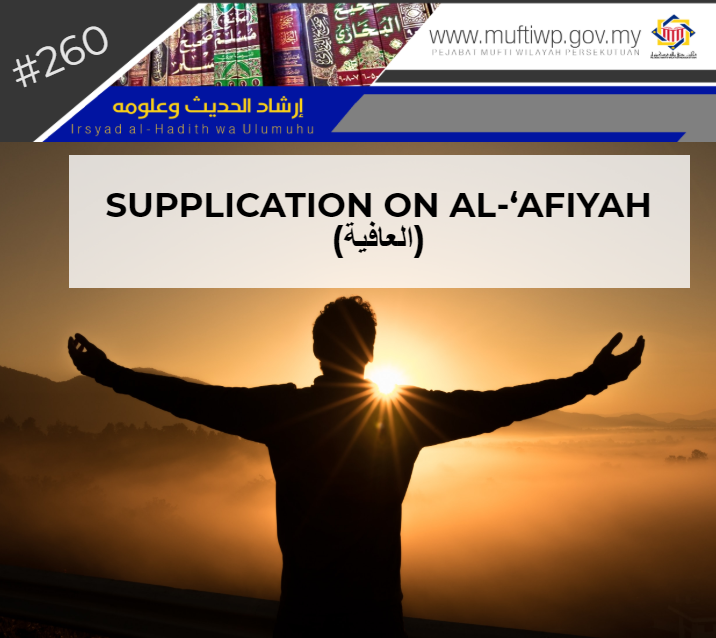 What is the status of this du’a and what is meant by the phrase al-‘Afiyah (العافية) in this du’a?

“O Allah our Lord, we ask of You for a complete ‘afiyah”

Du’a is a weapon for every believer and it should be utilized by each of them. This is because many people take this lightly. In addition, many verses in the Quran highlight the commandment for each people to always supplicate to Allah SWT. Among them is the saying of Allah SWT:

Call upon your Lord in humility and privately; indeed, He does not like transgressors.

Based on the above question, the above du’a is part of the whole text of the du’a. Here we cite the complete du’a which we already mentioned its source before:

This du’a is mentioned in two books as narrated by Ali bin Abi Thalib RA which are:

Besides, Imam al-Khatib al-Baghdadi (463H) explained on some errors in the sanad of this hadith that the teacher to al-Hakim al-Tirmidhi or his real name is Muhammad bin Ali is Umar bin Abi Umar and not ‘Amr bin Abi ‘Amr as stated in the book Kanz al-‘Ummal. [See: al-Muttafiq wa al-Mufariq, 1612/3]

According to Imam al-Hafiz Ibn Hajar al-Asqalani (852H), Umar bin Abi Umar or Umar bin Abi Rayyah is a narrator which is strongly criticized by the scholars of hadith like al-Bukhari, al-Daruquthni, al-Nasai’e, al-Hakim, ibn Hibban and many other big scholars of hadith. Among the critics upon this narrator is Dajjal, Matruk (whose narration is abandoned), narrating mawdu’ (fake/fabricated) hadith from thiqah (trustworthy) narrators, munkar hadith and many more. {See: Tahzib al-Tahzib, 447-448/7]

Looking to the above opinions, we state that the narration on the above du’a is not sahih as there is a narrator who is a fabricator. Therefore, we cannot say that the narration originated from the Prophet PBUH. Besides, Sheikh Abdullah bin Ibrahim al-‘Alawi said that both books above; Nawadir al-Usul and Musnad al-Firdaus are books full of dhaif (weak) hadith as mentioned by Sheikh Abdul Karim al-Khudair. [See: al-Hadith al-Dhaif, 368]

Still, we are not prohibited to supplicate using that du’a as its meaning is very good. In addition, in supplicating, there is a wideness in doing so and it is permissible to supplicate with any du’a even if it is not taught by the Prophet PBUH as long as it is good and does not contradict the religion.

At the same time, there is another hadith by the Prophet PBUH as cited by Imam al-Nawawi in his book al-Azkar.

O Allah, I ask Thee for security in this world and in the Hereafter: O Allah! I ask Thee for forgiveness and security in my religion and my worldly affairs, in my family and my property; O Allah! conceal my faults, and keep me safe from the things which I fear; O Allah! guard me in front of me and behind me, on my right hand and on my left, and from above me: and I seek in Thy greatness from receiving unexpected harm from below me." Abu Dawud said: Waki' said: That is to say, swallowing by the earth.

Here, we cite some meanings of al-‘Afiyah:

Imam al-Nawawi (676H) said: “There are so many hadith which command us to supplicate asking for ‘afiyah (from Allah SWT) and it (the phrase ‘afiyah) is a general word which contains an aversion of anything which is not good for the physical body and in religion; in the world and the hereafter.” [See: al-Minhaj Syarah Sahih Muslim, 46/12]

Sheikh al-Munawi (1031H) said: al-‘Afiyah is security (safety) from diseases and calamity. It also gathers between two safeties in the world and in the religion. Besides, ‘Afiyah will avert diseases which reside in one’s soul and physical body. [See: Faidh al-Qadir, 107/4]

According to Sheikh al-Mubarakfuri (1353H), the meaning of al-‘Afiyah is Allah’s protection for His servants. Hence, one who asks for it is asking for protection from His lord upon everything he intends for. [See: Tuhfah al-Ahwazi, 348/9]

Referring to the definitions above, we can conclude that al-‘Afiyah is security or safety in religion from all forms of fitnah; upon the body from all sorts of disease either diseases of the heart or others and upon one’s family and property from all calamities and mishaps.

In conclusion, du’a is one of the greatest acts of worship as it connects one directly to Allah SWT. Besides, in supplicating, there is a wideness in it, in it is not necessary to make du’a only with the du’a taught by Allah SWT in the Quran and what is taught by the Prophet PBUH in the hadith, even though the best du’a is what is from Allah SWT and the Prophet PBUH. We are still permitted to supplicate with any du’a as long as its meaning is good and it does not contradict the religion. Besides, we are commanded to observe some ethics, conditions and guidelines in supplicating so that our du’a is a du’a of high quality. Lastly, may Allah SWT bless us with ongoing protection as well as protect us from any matters which are bad either in this world or in the hereafter. Amin.