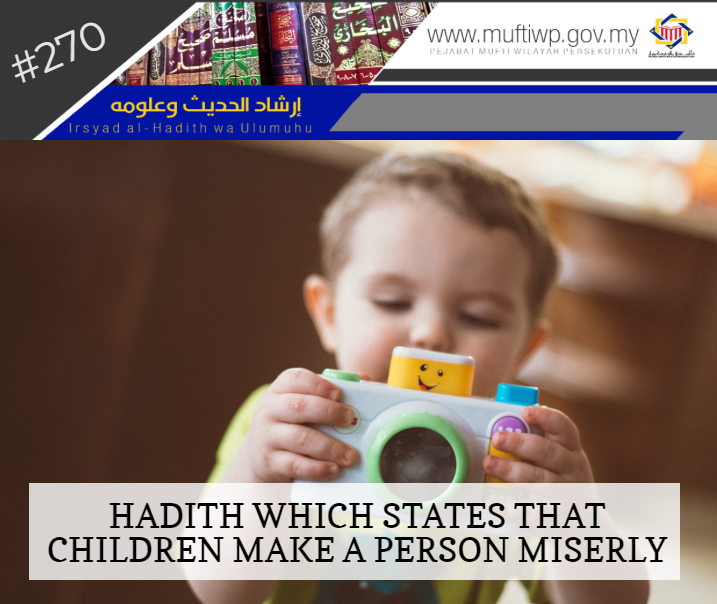 What is the status and meaning of this hadith?

This hadith is narrated in several sighah by several scholars and among them is al-Hakim. We state as the following:

From Muhammad bin al-Aswad bin Khalaf, from his father RA, that the Prophet PBUH embraced Husain and kissed him. Afterwards, he said: “Children can make a man a miser, coward, ignorant and sorrowful.”

The hadith is narrated by Imam Ahmad, Ibn Majah, Abu Ya’la and al-Thabarani. As for al-Hakim in his Mustadrak with the addition of (محزنة) and al-Thabarani with the addition of (مجهلة). The hadith is evaluated as sahih by Imam al-Hakim according to the conditions stated by Muslim [See: al-Mustadrak, 179/3] while al-Zahabi did not comment on it in his book al-Talkhis. Al-Hafiz al-Iraqi stated that the sanad is sahih when he takhrij the hadith in his book Ihya’ Ulumuddin. [See: al-Mughni ‘an Haml al-Asfar, 1168/1]. Moreover, Imam al-Haithami said that the narrators of the hadith are thiqah. [See: Majma’ al-Zawaid, 155/8]

The Commentary of the Hadith

Al-Iraqi said the meaning of (مَجْبَنَةٌ) is becoming fearful for a child would make a father becomes a coward thus refusing to fight for Allah due to his love for his child and fear of death.

While the meaning of (مَبْخَلَةٌ) is that the child makes the father become thrifty with his property.

Next, the meaning of (مَبْخَلَةٌ) means a person is willing to go on travels to learn and seek knowledge and work to amass his wealth. The reason is he is concerned to provide and accumulate wealth for his children.

The meaning of (مَحْزَنَةٌ) is when both parents are sorrowful when their beloved child falls ill. And when the child asks for something that they are unable to fulfil, then they will feel sad. This is stated by al-Imam al-Munawi. [See Faidh al-Qadir, 403/2]

Al-Zamakhsyari said that the hadith means that a child makes the father into a miserly man in order to protect and save his wealth for his child. The same for being ignorant, for while he is busy with his child, he will not have the time to study. Regarding being a coward, he is always fearful that he would get killed and that his child would be neglected after his death. As for feeling sorrowful, a father will always worry and be sorrowful of his child’s matters.

According to another narration, the Prophet PBUH said, “Indeed, you are from the fragrances of Allah” which means children are to be loved, kissed and embraced. These are some of the characteristics of a fragrance or fragrance plant that Allah SWT created. [See al-Fa’iq, 185/1]

Hopefully this explanation regarding the hadith will give us a better understanding about it. Amin.