IRSYAD AL-HADITH SERIES 326: CALLING ‘MY CHILD’ TO OTHER CHILDREN 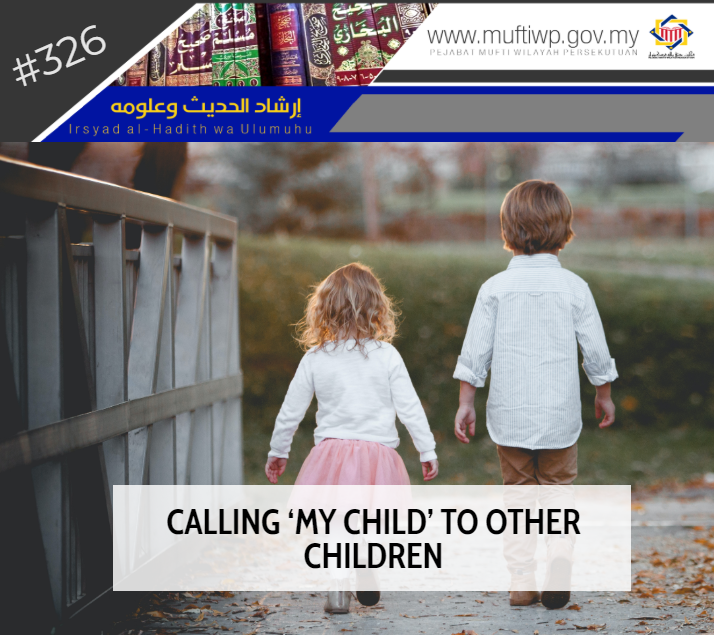 Is it permissible for us to use ‘my child’ when addressing other children?

Islam teaches its ummah to always love each other and Islam also encourages everything that leads to love among humans. This is because, there are several verses of al-Quran or the Prophet PBUH’s hadith that call for it and among the evidence which indicates that Islam views love as important is:

Besides, we as Muslims are encouraged to always honor, respect and love others of all age. No matter they are younger than us or the opposite. This is stated in a hadith even if the hadith is evaluated as gharib by Imam al-Tirmidhi, but its meaning is sahih, which is:

Based on the above question, there is a sahih hadith from Imam Muslim that the Prophet PBUH call Anas bin Malik RA with ‘my child’ while he is not the Prophet PBUH’s child and he is also a servant of him when his mother gave him to the Prophet PBUH when he was 10. The hadith is as the following:

Imam al-Nawawi (676H) put this hadith under the chapter of it is permissible to call others’ children with ‘My child’ and it is encouraged to do so for the purpose of love. Besides, this hadith clearly shows that it is permissible to call others’ children who are young with ‘o my child’. This act shows love and also highlights that the child’s position is the same as one’s own child in love. This is the same as people of the same age calling one another ‘ya akhi (o brother)’ with the meaning as we already explained. If the phrase used is for the purpose of love, then it becomes mustahab (Sunnah) as done by the Prophet PBUH. [See: al-Minhaj Syarah Muslim, 129/14]

Referring to the above explanation of Imam al-Nawawi, it is permissible or encouraged to call others’ children with ‘o my child’ taking the evidence of the action of the Prophet PBUH. However, the saying or action should be done in the purpose of love and not to say that it is his child. This is because the action of declaring other’s child as this is a haram action.

Besides, such phrase (O my child) will portray more love towards intended person including in the method of educating and interacting with young children.

In conclusion, it is encouraged to call others’ children with ‘my child’ because the action was also done by Prophet Muhammad PBUH towards other children. In fact, we are assured that every action of the Prophet PBUH is a revelation from Allah SWT and there must be wisdom behind it. Lastly, may Allah SWT make us be among people who love each other. Amin.