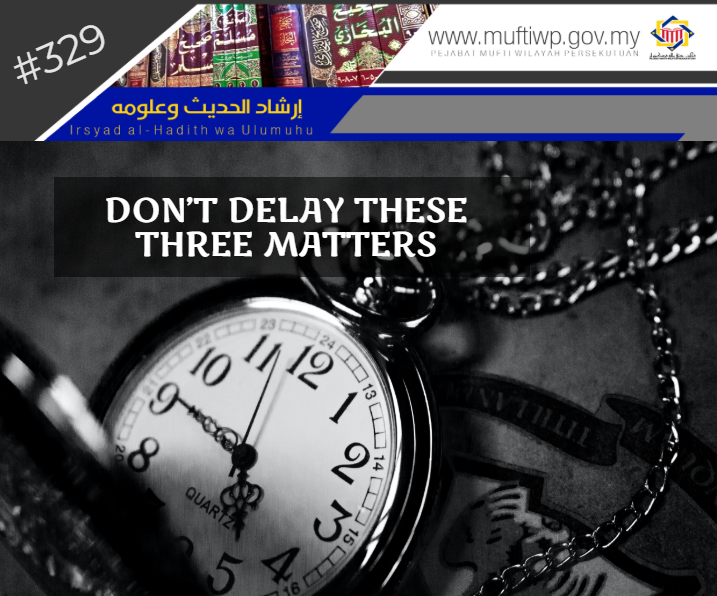 Assalamualaikum ustaz. I want to ask is it true that there is a hadith which states there are three matters which should not be delayed and one of them is marriage. What baffles me is that sometimes a person did not purposely delay his marriage but there are certain things that prevented him from it such as he hasn’t found someone he likes and other reasons. Hope for an explanation from ustaz.

Waalaikussalam wrt. wbt. Alhamdulillah, praise and thanks to Allah for the countless blessings He has blessed us all with. Blessings and salutations to the Prophet Muhammad PBUH, his wives, his family, companions and all those that follow his teachings to the day of judgement.

Regarding the related hadith, it is narrated in several renowned hadith books. Some of them are:

'Ali! Three are not to be delayed: Salat when its time comes, a funeral whet it (a prepared body) is present, and the (marriage of a) single woman when there is an equal for her."

Imam al-Tirmizi when commenting on this hadith, he included a commentary on the sanad of this hadith. He said that the hadith is gharib and its sanad is not muttasil.

“O Ali, do not delay three matters: prayer when its time begins. Funeral if there is death and marrying off one’s daughter when there is an equal for her.”

He said the hadith is ghorib sahih but it is not recorded by al-Bukhari and Muslim.

Simply put, we are inclined to state that this hadith is dhaif (weak). The reason is in the sanad of this hadith there is a narrator named Said bin Abdullah al-Juhani who is disputed.

Abu Hatim al-Razi explained about Said bin Abdullah al-Juhani: He is a majhul. (Refer al-Jarh wa al-Ta’dil,4/159). However, some stated that he is thiqah (trustworthy) such as Ibnu Hibban in his book al-Thiqat. However, this is disputed for Ibnu Hibban is famous for being lax when performing tausiq on any narrator.

Yes, the hadith is evaluated as dhaif (weak) but it has a sahih meaning. Don’t be too choosy when considering one’s spouse. The most important characteristics of our spouse is he/she should be religiously good, has a good character and conduct and other attributes that will lead to a blessed marriage filled with barakah and mawaddah. The Prophet PBUH gave several advices regarding the matters of one’s spouse. The Prophet PBUH said:

"If there comes to you one with whose character and religious commitment you are pleased, then marry (your daughter or female relative under your care) to him, for if you do not do that there will be Fitnah in the land and widespread corruption.'"

Narrated by al-Tabarani (280) in al-Mu’jam al-Kabir. He said: There is none who narrated this hadith from Ibn Ajlan except Abdul Hamid bin Sulaiman.

Syeikh Atiyah Salim said: This means that a marriage is built based on righteousness and religion. Refer Syarh Bulugh Al-Maram(2/357)

“0 young men, those among you who can support a wife should marry,”

"A woman is married for four qualities, for her wealth, her family status, her beauty and her religion: so, get the religious one and prosper."

Hence, when a person found a suitable spouse who has great character and good conduct and who is prepared to face the life of marriage, then hasten and don’t delay it. May Allah SWT give us all the correct understanding in the religion and ease all our matters.