IRSYAD AL-HADITH SERIES 332: MERCY IS BESTOWED BECAUSE OF PIOUS PEOPLE 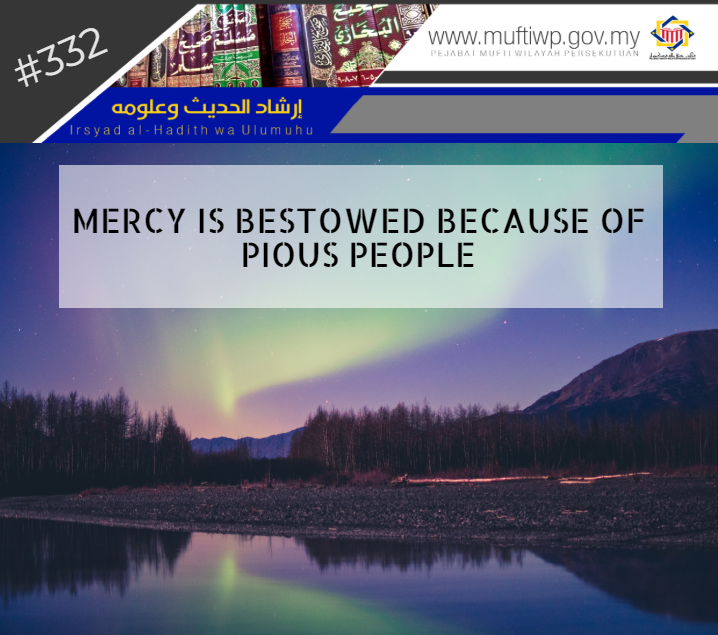 Is the claim which states that Allah’s mercy is bestowed when names of pious people are mentioned true?

Mercy is one of the attributes of Allah SWT and it is mentioned widely in the Quran. Among them are:

And if not for the favor of Allah upon you and His mercy, you would have been among the losers.

He selects for His mercy whom He wills. And Allah is the possessor of great bounty.

Both verses show that Allah SWT says the attribute of mercy as His and this attribute encompasses all in the world and His creations. The effects of this mercy from Allah will be felt and sensed when one performs the obedience and obligations stated by Allah SWT, as well as leaving all prohibitions and wrongdoings. This way, Allah’s mercy upon a slave will be felt.

Based on the above question, there is a saying claimed to be from the Prophet PBUH, which is:

It is claimed that the Prophet said:

“When pious people are mentioned, Allah’s mercy is bestowed”

Before we state the status or ruling on this hadith, first, we would like to state several opinions of scholars about this hadith or narration, some of them:

In addition, Imam Ibn Solah (643H) in his book cited a story from Abu ‘Amr Ismail bin Nujaid when he asked Abu Ja’far Ahmad bin Hamdan and both of them are pious servants of Allah. He said (to Abu Ja’far): “By which intention shall I write a hadith?” Abu Ja’far answered: “Have you see that when pious people are mentioned, then Allah’s mercy is bestowed?” Abu ‘Amr answered: “True”. Then, Abu Ja’far said: “By that, the Prophet PBUH is the leader of all pious people”. [See: Ma’rifah Anwa’ Ulum al-Hadith, 353/1]

Analyzing the several opinions above, we are inclined to say that the hadith is not from the Prophet PBUH, but it is a saying of Sufyan bin ‘Uyainah even if Imam al-Zamakhsyari cited in his sermon that it is the hadith of the Prophet PBUH. [See: Kasyf al-Khafa’, 82/2]. However, there is a sahih hadith on Allah’s mercy which encompasses people in an event in which that event makes people remember Allah SWT.

The people do not sit but they are surrounded by angels and covered by Mercy, and there descends upon them tranquility as they remember Allah, and Allah makes a mention of them to those who are near Him.

In addition, normally, the names of these pious people will be mentioned in these religious classes. However, in the above sahih hadith, it shows that Allah’s mercy is bestowed not due to the mentioning of these names, but because it leads to the remembrance of Allah SWT. Besides, it is our obligation as a Muslim when we know that a hadith is not sahih and it is not from the Prophet PBUH to not say it to be from him because it is feared to be included in falsehood under the name of the Prophet PBUH.

In conclusion, the above hadith is not sahih as it has no origin from among the marfu’ which comes from the Prophet PBUH. Lastly, may Allah SWT guard our tongue against committing falsehood under the name of the Prophet PBUH. Ameen.