IRSYAD AL-HADITH SERIES 333: EVERYTHING IS BEST DONE IN MODERATION 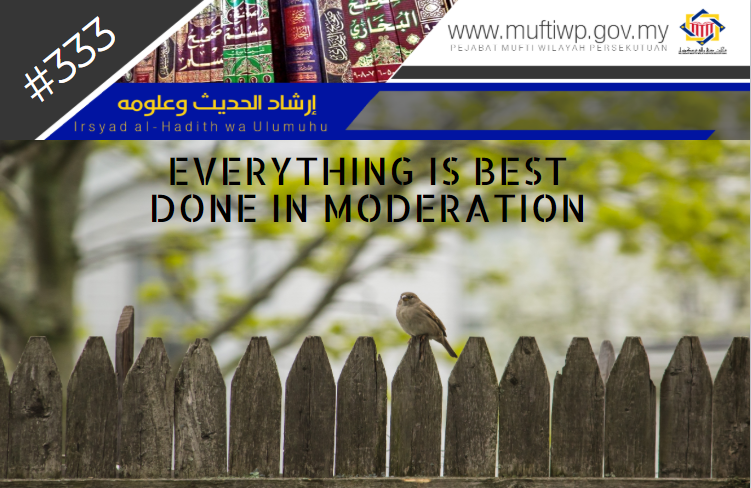 “The best of a matter is its moderation.”

In the Quran, Allah SWT has created us the ummah of the Prophet Muhammad PBUH as the ummah in the middle, which is those who are eligible to explain to all mankind on what is right and wrong:

“And thus, we have made you a just community that you will be witnesses over the people and the Messenger will be a witness over you.”

Imam al-Baghawi (510 H) wrote in his commentary from al-Kalbi regarding the meaning “just community” is people or followers who are just between those who are excessive in worship and negligent in fulfilling the Syariah of the religion where both these attributes are reviled in Islam. (See Ma’alim al-Tanzil, 174-175/1)

According to the above question, the hadith is narrated by Imam al-Baihaqi (458 H) in his book:

“The best of a matter is in moderation.”

Among the scholars who evaluated and issued a ruling on the hadith or narration are:

“Ruined, were those who indulged in hair-splitting.”

Imam al-Nawawi when commenting the meaning of “الْمُتَنَطِّعُونَ” are those who are too particular, excessive and transgresses the limits in terms of words and actions. (See al-Minhaj, 220/16)

Besides, Islam also prohibits its ummah from being too lax in a certain matter. This should be explained by Imam Ibn al-Qayyim in his book: