IRSYAD AL-HADITH SERIES 336: SEEKERS OF KNOWLEDGE WILL BE REWARDED WITH THE REWARDS OF HAJJ 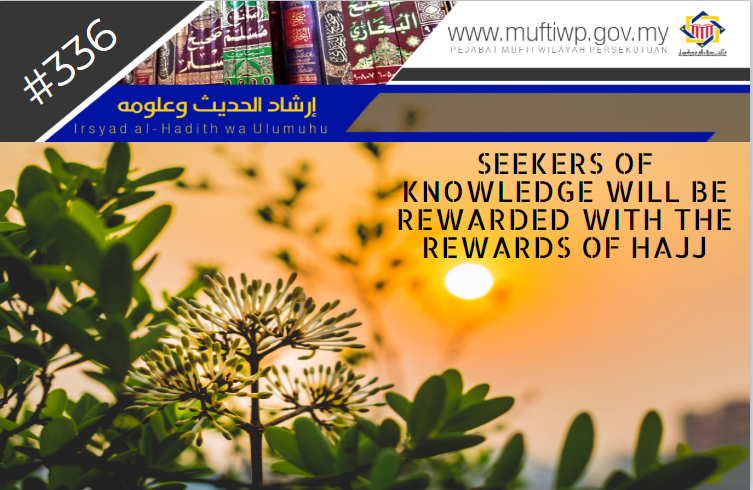 Assalamualaikum wrm.wbt. Is it sahih the rewards of seeking knowledge are the same as performing hajj?

Learning or seeking knowledge is an obligation and commandment for every individual. The reason is knowledge is the benchmark in our lives in determining whether something we are doing is correct or otherwise, in accordance with what Allah SWT and the Prophet PBUH wanted. Furthermore, Allah SWT honours those who are knowledgeable and increase their status based on His statement:

“Allah will raise those who have believed among you and those who were given knowledge, by degrees.”

According to the above question, we would like to state that there is a hadith which states that the rewards for those who went out to the mosque in search of knowledge, then he will be rewarded with the rewards of a perfect hajj. The hadith meant is as the following:

Whoever went to the mosque with the purpose of learning something good and teaching it, then for him is the rewards of a person who performs a complete hajj.”

Among the scholars who evaluated this hadith are:

Considering to the above evaluations by scholars, we would like to state that the hadith is sahih. Furthermore, Imam al-Hakim (405 H) also narrated this hadith with a different sanad in his book which can support the above hadith:

To conclude, there is a sahih hadith which states the advantages or rewards of hajj is for those who went to seek knowledge. This attribute should be exemplified by every individual who loves knowledge. Besides, it is among the important matters in learning which is to right one’s intention so that it would not due to wanting to be famous or known as the most knowledgeable when compared with others. Once again, we would like to state that the hadith related to seeking knowledge is sahih. However, it should be understood that the rewards do not abrogate the obligation of hajj on a person. Lastly, may Allah SWT grant us beneficial knowledge and give us understanding in this religion so that we are able to convey it to others. Amin.