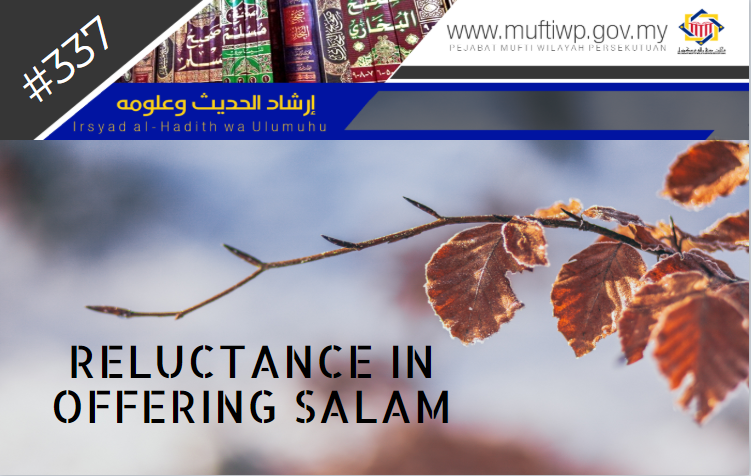 Assalamualaikum, is there a hadith which mentions that a person who doesn’t like to offer salam to others are miserly?

The ruling of offering salam is a greatly encouraged sunnah (سنة مستحبة) by the Prophet PBUH. The reason is there is a commandment or instruction from the Prophet PBUH asking us to spread salam to others. However, the commandment is not an obligation but just an encouraged sunnah. This is the famous opinion among scholars. As for the ruling of answering the salam, it is wajib, this is according to the statement of Allah SWT:

“And when you are greeted with a greeting, greet [in return] with one better than it or [at least] return it [in a like manner].”

According to the above question, there is a hadith which states that the most miserly person is a person who rarely ever offer salam to others, this is in accordance with a narration by Imam al-Thabarani (360 H) with a marfu’ sanad:

“The most miserly person is a person who is seldom offer salam.”

The above narration from Abu Hurairah RA came in the condition where the sanad is mawquf (stopped at the Companion and does not reach the Prophet PBUH and discontinued). Among the scholars who narrated the above hadith with a mawquf sanad are Imam Ibn al-Ja’d (230 H) in his musnad (2663) and Imam al-Bukhari (256 H) in his book al-Adab al-Mufrad (1015). However, among the scholars who narrated the hadith with marfu’ sanad are Imam al-Thabarani as stated above, Imam al-Baihaqi (458 H) in his book Syu’ab al-Iman (8392,8394 and 8395) and Ibn Syahim (385 H) in his book al-Targhib fi Fadhail al-‘Amal (488 and 492).

Furthermore, Imam al-Daraqutni also stated that the sahih opinion is it is mawquf in determining whether the narration is mawquf or marfu’. (See al-‘Ilal, 217/11). This opinion by al-Daraqutni is different from the opinion of Imam Ibn Hibban for he narrated the hadith in his sahih. (See Sahih Ibn Hibban, 349-350/10). Although the narration is mawquf, it has several support from other hadiths although the supporting hadiths’ sanad is dhaif (weak), however, they are able to elevate the status of this mawquf narration. Among them is narrated by Abdullah Ibn Mughaffal in al-Mu’jam al-Awsath (3392) and Jabir RA in Musnad Ahmad (14517) and al-Mustadrak by Imam al-Hakim (2195).

Considering the above difference, we are inclined to state that the above narration from Abu Hurairah RA is mawquf or dhaif (weak) for its sanad is disconnected and does not reach to the Prophet PBUH. Among other scholars who are inclined towards this opinion are Imam al-Daraqutni as we have stated above as well as Imam al-Bukhari for he (al-Bukhari) did not associate the narration to the Prophet PBUH , but states it is from Abu Hurairah as stated in his book al-Adab al-Mufrad. Furthermore, this is also the opinion of Imam al-Hafiz Ibn Hajar (852 H) for this narration by Abu Hurairah RA. (See Fath al-Bari, 565/9)

The Advantages of Offering Salam

Among the hadiths of the Prophet PBUH which mentioned the advantages of giving salam to others are:

A person asked Allah's Messenger (ﷺ) . "What (sort of) deeds in or (what qualities of) Islam are good?" He replied, "To feed (the poor) and greet those whom you know and those whom you don't know."

“Allah's Messenger (ﷺ) ordered us to do seven (things): to visit the sick, to follow the funeral processions, to say Tashmit to a sneezer, to help the weak, to help the oppressed ones, to propagate As-Salam (greeting), and to help others to fulfill their oaths (if it is not sinful).”

In the hadith, there are 7 commandments of the Prophet PBUH for us to perform in maintaining the relationships between people. One of them is to spread salam. A result from this commandment is to showcase the feeling of mawaddah and love in our society.

To conclude, the above narration is mawquf or dhaif (weak) for there is a void in the sanad of which it does not reach to the Prophet PBUH and stopped at Abu Hurairah RA. Moreover, offering salam is a beloved sunnah of the Prophet PBUH and is encouraged in our religion according to numerous evidences from the Quran and hadiths of the Prophet PBUH who encourages the act or practise. Hence, we close this article with the speech made by Imam al-Nawawi (676 H) which shows the importance of offering and answering salam: