IRSYAD AL-HADITH SERIES 364: NAMING A PERSON AFTER HIS GRANDFATHER 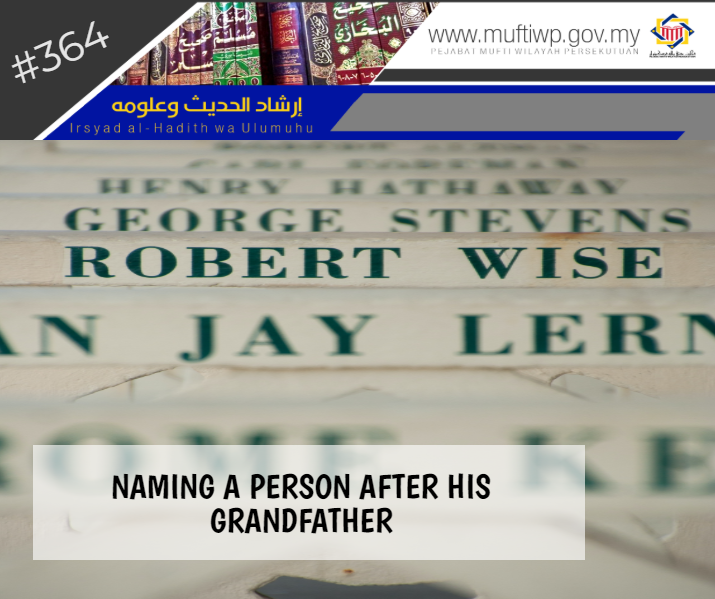 Is it permissible to name a person after his grandfather?

Moreover, there are two methods or ways to name a person after someone else (See Syarah Alfiyah, 576):

According to the above question, we try to assemble the related hadiths of naming a person after his grandfather. Among the hadiths which narrate the related matter under this chapter are:

“Whoever claims to belong to someone other than his father, or (a freed slave) who claims that his Wala is for other than his real master, the curse of Allah (SWT), the angels and all the people will be upon him.”

“If anyone pretends to be the son of a man other than his father, or attributes his freedom to people other than those who set him free, on him will be the curse of Allah that will continue till the day of resurrection.”

This hadith clearly shows the prohibition of a person to name after himself as the son of someone else (who is not his father) or someone who refers himself to a person who is not his master. The reason is it is a form of disobedience of blessing (kufr ni’mat) and abrogating the rights of inheritance, obedience towards the master, rational mind and others. Furthermore, it severs the ties of silaturrahim and a form of disobedience. (See Aun Ma’bud, 14/15)

“He who claimed for another one his fatherhood besides his own father knowingly that he was not his father-to him Paradise is forbidden.”

"If somebody claims to be the son of any other than his real father knowingly, he but disbelieves in Allah,”

According to Imam al-Nawawi, both hadiths of Imam Muslim stated above can be understood that there are two meanings for the word or meaning of kufur (disbelief) for the people who commit this (See al-Minhaj, 2/52):

The Ruling of Naming A person After His Grandfather

Here, we cite the opinion from Syeikh al-Sarakhsi, he said:

Furthermore, there are scholars who named themselves after their grandfather and not their father. Among them are:

The same for a Companion who is famously known as Abu Ubaidah al-Jarrah where he is not an exception of being named after his grandfather and not his father. Abu Ubaidah’s real name is:

To conclude, it is clear to us that equating something to what is not his right is haram regardless of whether it is wrongfully claiming one’s father or master. However, there are some scholars who permit it but on certain conditions or dhawabit stated above. Thus, there are numerous scholars of whom they are famously known by their grandfather’s name including Imam al-Syafie. Lastly, may Allah SWT give us all understanding in this religion. Amin.