IRSYAD AL-HADITH SERIES 365: FRIDAY IS THE CHIEF DAY OF ALL DAYS 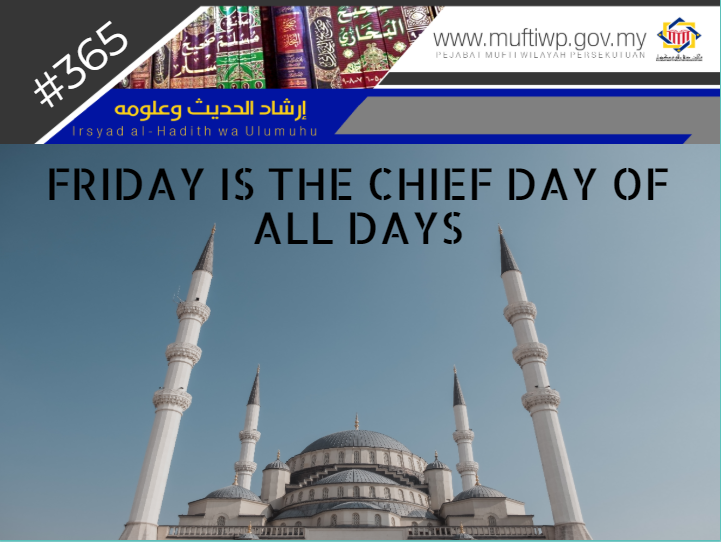 Is there a hadith stating that Friday is the chief day among all days of the week?

Friday is an honoured day in Islam. The reason is, there are numerous hadiths that describe the benefits of Friday. Among them, we include the following:

“Five prayers and from one Friday prayer to (the next) Friday prayer is an expiation (of the sins committed in between their intervals) if major sins are not committed.”

Referring back to the question, there is a hadith that describes Friday as the chief of all days, which is as the following:

“Friday is the chief of days, the greatest day before Allah. It is greater before Allah then the Day of Adha and the Day of Fitr. It has five characteristics: On it Allah created Adam; on it Allah sent down Adam to this earth; on it there is a time during which a person does not ask Allah for anything but He will give it to him, so long as he does not ask for anything that is forbidden; on it the Hour will begin. There is no angel who is close to Allah, no heaven, no earth, no wind, no mountain, and no sea that does not fear Friday.”

Sunan Ibn Majah (1084), Musnad Ahmad (15548)[Syeikh Syu’aib al-Arna’outh states the sanad is weak due to Abdullah bin Muhammad bin Uqail or Ibn Abi Thalib al-Quraisyi. Ibn Hajar states that his memorization is terrible but his narrations can be of reference. While other narrators are thiqah]

Furthermore, there are other narrations of Ibn Majah from Abu Lababah that state Friday is the chief of all days. While, Ibn Jarir also narrated it in his commentary, as well as Ibn Abi Syaibah from the narration of Said bin al-Musayyib through mursal method with valid and authentic chain of narrators (sanad). Moreover, al-Thabarani also narrated in al-Awsath from the narration of Anas bin Malik and al-Hakim narrated from Abu Hurairah RA. Imam al-Baihaqi also narrated the same in al-Syu’ab from the statement made by Abdullah bin Mas’ud with a valid and authentic chain of narrators (sanad).

Hence, we are inclined to the opinion that it is a weak narration as stated above. However, there are other narrations that have the same meaning as the stated hadith which support it. Furthermore, the hadith is not related to acts of worship, just the benefit and honor of Friday compared to other days.

As a conclusion, Friday is an honoured day with numerous benefits compared to other days. Thus, we as Muslims should be concerned regarding this matter, so we do not neglect our worship especially on this honoured day. Lastly, may Allah SWT make us from among His slaves who are sincere in worship and strengthen us to be consistent in doing good deeds. Amin.