IRSYAD AL-HADITH SEERIES 370: SLEEPING IS A FORM OF WORSHIP FOR THOSE WHO FAST? 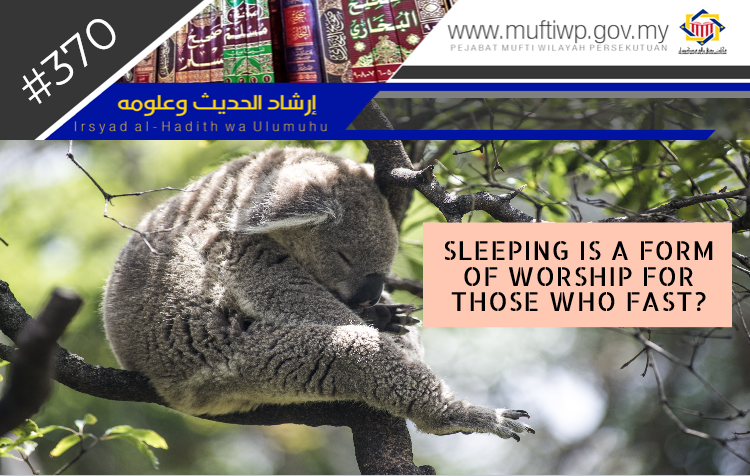 Is there a hadith which narrates that sleeping for a person who fasts is a form of worship?

According to the above question, there is a famous hadith which would always come up every time the month of Ramadhan comes around.

“Sleep for those who fast is worship, his silence is tasbih, his supplication is granted and his deeds are multiplied.”

Imam al-Baihaqi stated that there are two weak narrators in the sanad of this hadith which are Ma’ruf bin Hassan and Sulaiman bin ‘Amr al-Nakha’ie but Sulaiman is weaker than Ma’ruf. (See Syu’ab al-Iman, 5/422). Furthermore, Sulaiman al-Nakha’ie is a liar. (See al-Mughni ‘An Haml al-Asfar, 1/182). Imam al-Suyuthi also evaluated this hadith as weak (dhaif). (See al-Jami’ al-Saghir, 2:363)

Considering the above opinions of scholars, we are inclined to state that the hadith is dhaif (weak) for there is more than one narrator who is deemed as weak by scholars.

As for in relation to supplication, the supplication of a person who is fasting will be granted as stated in another hadith:

Narrated by al-Baihaqi in Syu’ab al-Iman (3323). [Imam al-Suyuthi evaluated the hadith as hasan]

In another narration from Abu Hurairah RA, the Prophet PBUH said:

“There are three whose supplications are not turned back: A just ruler, and a fasting person until he breaks his fast. And, the supplication of one who has been wronged,”

According to two of the above hadiths, scholars ruled it sunnah for a person who is fasting to increase his supplications from the beginning of day (starts to fast) until the end of it.

Furthermore, it is true that Allah SWT will multiply the rewards of deeds for those who fast. This is in accordance with a sahih hadith of the Prophet PBUH:

"Every deed of the son of Adam will be multiplied for him, between ten and seven hundred times for each merit.”

Thus, although the hadith is dhaif, there are other hadiths which support the meaning of the hadith. This proves that a person who fasts will receive great advantages from Allah SWT.

To conclude, fasting is a special worship which has great advantages promised by Allah SWT for those who perform it. Furthermore, the month of Ramadhan is the month that those who love worship always wait for. Thus, let us make the month of Ramadhan as the month we amass as many good deeds and worships that we can as our supply when meeting with Allah SWT. Lastly, may Allah SWT make us from among His slaves whose sins are forgiven and deeds are accepted. Amin.