IRSYAD AL-HADITH SERIES 376: THE MEANING OF THE NIGHT OF AL-QADAR 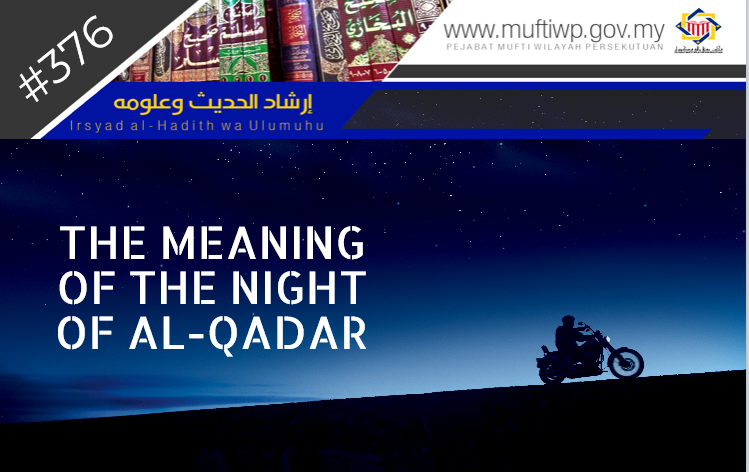 What does the night of al-Qadar means?

As we realize it or not, we have entered the last 10 nights of Ramadhan. Furthermore, in this blessed month of Ramadhan, Allah SWT has created a night so special that any deed performed on this night would be multiplied and this night is known as the night of al-Qadar or lailatul Qadar. This is according to the statement of Allah SWT:

In answering the above question, scholars have differing opinions as to the meaning of the night of al-Qadar. Some of their opinions are:

Imam Ibn Hajar in Fath al-Bari cited the statement of Imam al-Nawawi where he said, it is named as the night of al-Qadar because on this night the angels will write the qadar of humans as stated by scholars (See Fath al-Bari, 4/255). Imam al-Nawawi also stated this in his book al-Majmu’. (See al-Majmu’, 6/447)

Thus, we are inclined towards the fifth opinion which states that the night of al-Qadar or Lailatul Qadar is because on the night the qadar of each human are decided or decreed as stated by Imam al-Nawawi according to the statement of Allah SWT:

“On that night is made distinct every precise matter,”

The Wisdom Behind Why Lailatul Qadar is Hidden

Among the wisdom as to why Allah SWT hides when exactly is the night of al-Qadar is so that it will be a motivator for people to search for it. Furthermore, it is so that people will strive in worship in search of this night, just like why the time that supplication will be granted on Fridays is also kept a secret as well as why the honoured names of Allah SWT from among His names are hidden.

May Allah SWT bless us a night of al-Qadar filled with worship which would ultimately make us eligible to receive His forgiveness. Amin.