IRSYAD AL-HADITH SERIES 390: THE ADVANTAGES OF LEARNING IN MASJID AL-NABAWI 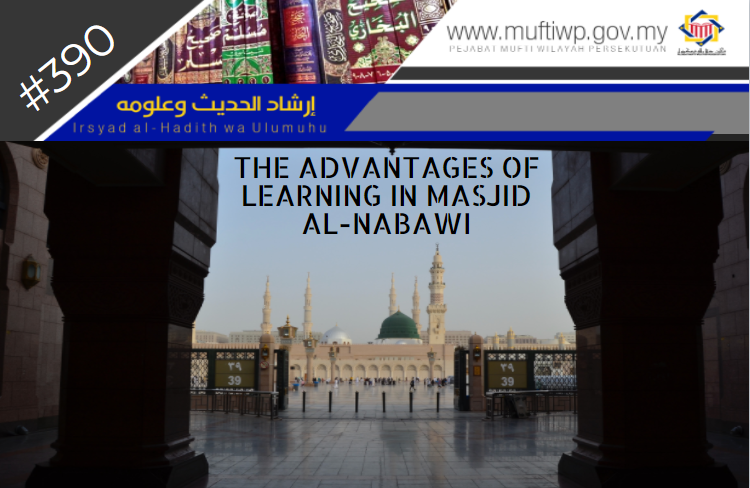 Assalamualaikum SS Datuk. Is there a hadith stating about the advantages of learning in al-Nabawi mosque?

Learning is an obligation upon everyone. The reason is it is the benchmark in our lives to determine whether what we are doing is right or wrong according to Allah SWT and His Messenger PBUH. Furthermore, Allah SWT also raises the status of knowledgeable people according to His statement:

“Allah will raise those who have believed among you and those who were given knowledge, by degrees.”

In another narration from Imam Ahmad in his Musnad:

“Whoever come to our mosque with a good intention, such as to learn or teach, he is like a person who fights for Allah. And whoever come for other purposes, then it is as though he is looking at other people’s property.”

Scholars have differing opinions regarding the status of the above hadith, Syeikh Syu’aib al-Arna’outh evaluated the hadith as dhaif because one of its narrators named Humaid, for there are difference of opinions regarding his status by hadith scholars. (See Musnad Ahmad, /154). While Syeikh al-Albani stated the hadith is sahih. (See Sahih wa Dhaif Sunan Ibn Majah, 1/299). Furthermore, Imam Ibn Hibban cited the narration by Imam Ahmad in his Sahih. (See Sahih Ibn Hibban, 288/1). Imam al-Munziri said that this hadith is abandoned and the narrators are dhaif (weak) as agreed by scholars. (See al-Targhib wa al-Tarhib, 1/60). After considering all the above opinions of scholars, we are inclined to state that the hadith is sahih as stated by Imam Ibn Hibban.

However, the meaning of the words of the Prophet PBUH when he said “Whoever comes to this mosque of mine,” can have two meanings, whether it means the Prophet PBUH specifies the advantages to only masjid al-Nabawi or the Prophet PBUH said as such because at the time only al-Nabawi mosque is used as a place of education and learning. Furthermore, the analogy of a person learning with a person fighting for Allah SWT is because the action will tire him, an insult to the shaytan and enlivening the religion. Moreover, the hadith also stated that a mosque is the trade center of knowledge thus, a person must perform trade by either learning or teaching it. Thus, he will benefit from it. (See Hasyiah al-Sindi ‘ala Sunan Ibn Majah, 100-101/1)

To conclude, the hadith that explains about the advantages of learning in al-Nabawi mosque is sahih as stated above. Furthermore, we as Muslims should always strive to learn for it is a commandment and obligation on us. As for those who are able to teach, then it is his obligation to convey and teach it to others. Lastly, may Allah SWT give understanding in religion and make it so that our knowledge is beneficial to us. Amin.