IRSYAD AL-HADITH SERIES 415: OFFERING SALAM ONLY TO PEOPLE WE KNOW 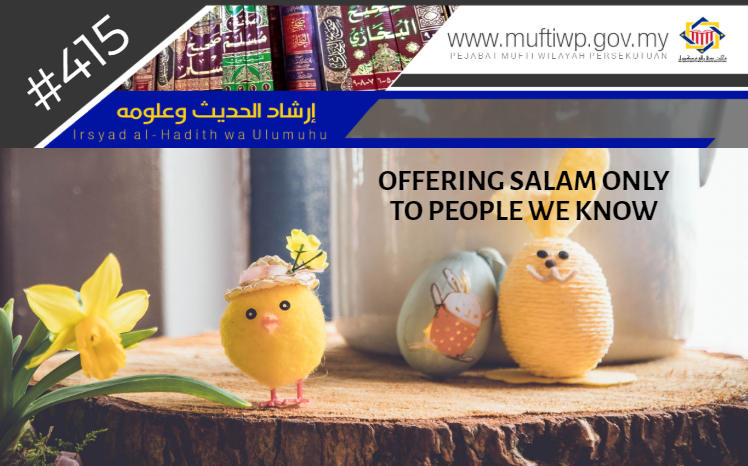 Is offering salam only to people we know a sign of doomsday?

Giving or offering salam among Muslims is the very reason love and care are nurtured and it is a part of the sign of the completeness of iman (faith) that will ultimately qualify us to enter Allah SWT’s paradise.

According to the above question, there is a hadith in Musnad Imam Ahmad regarding the matter where it is stated:

“Among the signs of Doomsday is when a person offers greet with salam to others and does not offer salam to another, unless it is a person that he knows.”

“Among the signs of Doomsday is when a person walks in a door of a mosque and does not offer two rakaat of prayer and offer salam to others unless to the people that he knows.”

The hadith is evidence on the sanctioning of offering salam to people we do not know to start a conversation and socialize with other Muslims, building a relationship for every Muslim is a brother to us and not to avoid others. (See: Fath al-Bari, 11/21). Hence, this is in accordance with the hadith of the Prophet PBUH where we are commanded to give salam not only to people that we know, but to others too.

As a conclusion, the hadith explains about offering salam only to people we know is included as one of the signs of doomsday. Furthermore, the practice of spreading salam in Muslims today is fading even though it is a beloved sunnah of the Prophet PBUH for its ability in strengthening the bonds of Muslims. Moreover, offering salam is a simple action which does not cost anything but a little energy of pronouncing it with a sincere heart. Lastly, may Allah SWT give us strength in practising the sunnah of the Prophet PBUH and protect us from the fitnah in the ned of times. Amin.