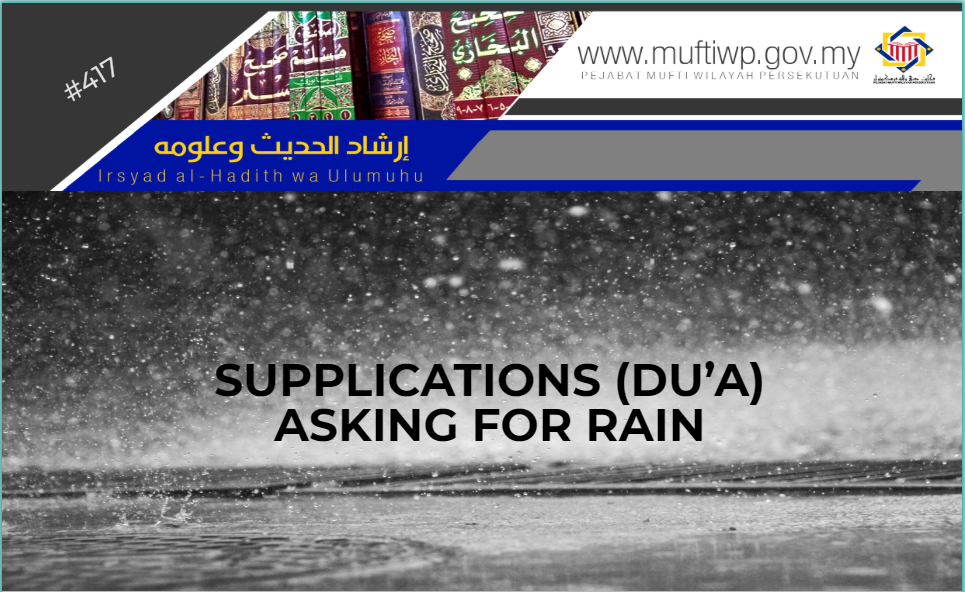 Is there any supplication taught by the Prophet PBUH to ask for rain from Allah SWT?

We as believers should always supplicate to Allah SWT because humans are full of weaknesses and always in need of the Creator at all time and place. Hence, there are many supplications taught by the Prophet PBUH for us to practice in our daily lives. Allah SWT also call us to ask of Him through His saying:

And your Lord says, "Call upon Me; I will respond to you."

Imam Ibn ‘Asyur in his commentaries stated that this verse is the evidence that Allah SWT ask His servants to supplicate to him pertaining their needs and wants. It is also the dalil (evidence) of its sanctioning and this has never been refuted among the Muslim scholars. [Refer: Tafsir Ibn ‘Asyur, 183/24]

Recently, our country faced haze and unhealthy weather. This is a reminder from Allah SWT for His servants asking them to return to Him by repenting for their past sins. In this circumstance, rain is really needed to lessen the haze.

Addressing the above question, we would like to cite some supplications of the Prophet PBUH in asking for rain in Hisn al-Muslim and they were recited by the Prophet PBUH during his istisqa’ prayer (prayer to ask for rain).

“O Allah! give us rain which will replenish us, abundant, fertilizing and profitable, not injurious, granting it now without delay.”

This du’a also contains a request to Allah SWT regarding the rain in which even if it is heavy, there will be neither harm nor destruction. Besides, the rain is hoped to be filled with plenty of goodness. [Refer: Syarh Hisn al-Muslim, 212]

“O Allah! Provide water for Your servants and Your cattle, display Your mercy and give life to Your dead land,”

This du’a includes all types of animals as well as insects, and not only towards farm animals. Besides, giving life to the dead land means to restore the fertility of the land into its original form. [Refer: Syarh Hisn al-Muslim, 213]