IRSYAD AL-HADITH SERIES 425: THE MEANING OF THE HADITH A SLAVE WILL GIVE BIRTH TO HER MASTER 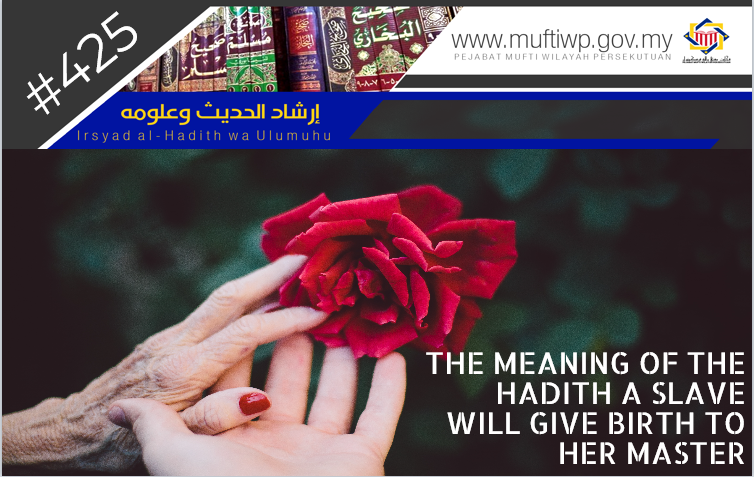 What is the real meaning of a hadith which states among the signs of the last day is when a slave gives birth to her master? The original word in the hadith is ‘al-amah’ which according to my understanding means a maid or slave. But it is usually understood as a mother who gave birth to a disobedient child. Hope for an explanation.

The hadith meant is a hadith narrated by Umar bin al-Khattab RA, a hadith which witnesses the visit of Gabriel to the Prophet PBUH and the Companions teaching them about Islam, Iman (faith) and ihsan. Among the content of the discussion is:

Gabriel said, "Inform me about the Hour." He (the Prophet) said, "About that the one questioned knows no more than the questioner." So, he said, "Well, inform me about its signs." He said, "They are that the slave-girl will give birth to her mistress…”

Lexically, al-amah means slave woman that is obtained as prisoner of war.

Imam al-Nawawi states that most scholars said it means the widespread of slavery and the children born from slave women with their master and these children will in turn become the slave women’s masters. (Refer Al-Minhaj Syarh al-Nawawi ‘ala Muslim 1/158)

However, Imam Ibn Hajar al-‘Asqalani when commenting on this hadith said the accurate meaning for the phrase ‘slave-girl will give birth to her mistress’ is children will disobey their own parents, where children will treat their parents the way a master treat their slaves, with insults, abuse and disrespect, hitting and forcing their parents to work for them. This opinion is appropriate with the context of the hadith discussing one of the signs of the Last day, where the lower-class people will be raised in their ranks and parents who are supposed to have authority on their children are overwhelmed by their own children.

He agreed with the opinion of the majority of scholars which was cited by Imam al-Nawawi, for although slavery exists, women slaves who gave birth to their master’s children has been happening since the time of the prophet PBUH. (Refer Fath al-Bari 1/122-123)

According to Syeikh Mustofa Dib al-Bugha and Syeikh Muhyiddin Mistu, the phrase is a metaphor (kinayah) for the widespread of disobedience towards parents by their children that a mother and father are depicted as if they are slaves who are afraid of their master and this happens in the damaged phase (fasad al-zaman) and the disorder of life (inqilab al-ahwal). (Refer al-Wafi fi Syarh al-Arba’in al-Nawawiyyah, pg. 17-19)

To conclude, the literal meaning of the hadith certainly states that among the signs of the Last day is a slave woman giving birth to her master and this is the opinion of the majority of scholars.

However, there are scholars such as Imam Ibn Hajar al-‘Asqalani and Syeikh Mustofa Dib al-Bugha who understand it through a wider context and came to the conclusion that it is a metaphor towards the widespread of disobedient children who mistreated their parents just like the treatment of a master towards his slave.