IRSYAD AL-HADITH SERIES 427: HADITH ON THE PROHIBITION OF REVILING ROOSTER 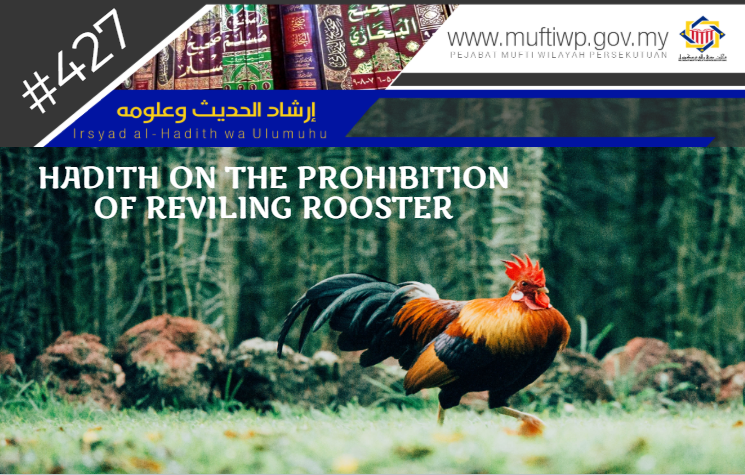 Is there a hadith regarding the prohibition of reviling rooster?

In the Quran, Allah SWT acknowledges that the Prophet PBUH is the perfect example for His slaves:

Moreover, the Prophet PBUH encouraged us to always exhibit good character and conduct and to always do good to all other creations of Allah SWT which also includes plants and animals. This is as stated in a hadith:

According to the above question, there is a hadith that prohibit us from reviling rooster, this is stated in a narration by Imam Abu Daud in his sunan:

"Do not revile the rooster for it wakes you up for prayer."

Syeikh Syu’aib al-Arna’outh said when he was evaluating the above hadith, all the narrators are thiqah (trustworthy) and they are all narrators of al-Syaikhayn (al-Bukhari and Muslim). However, the scholars have differing opinions in determining the ruling for this hadith between mursal (disconnected sanad due to several companions who are missing from the sanad) or marfu’ (continuous sanad to the Prophet PBUH) [See Sunan Abu Daud, 7/429] Imam al-Nawawi states the hadith as sahih in two of his book; al-Azkar and Riyadh al-Solihin. (See al-Azkar, 364 dan Riyadh al-Solihin, 481) Furthermore, Imam al-Suyuthi state the hadith is sahih. (See al-Jami’ al-Saghir, 2/391)

Imam al-Nasaie presented a mursal narration regarding an Ansar who reviled a rooster, then the Prophet PBUH rebuked his actions:

“There was a rooster which crows beside the Prophet PBUH, then an Ansar man reviled it. Thus, the Prophet PBUH said: “Don’t revile the rooster for it wakes a person for prayer,” (See al-Sunan al-Kubra (10716), 9/346)

This hadith shows that humans wake up and perform qiamullail due to the crowing of the rooster. Hence, whoever helps another in obedience should be praised not reviled. Imam al-Munawi states that Allah SWT make it natural for a rooster would crow continuously during sunrise and sunset. (See Aun al-Ma’bud, 5/14)

To conclude, the above hadith is sahih and the restriction is not a prohibition (haram), but shows the makruh (undesirable) ruling for those who do it, as stated by Imam al-Nawawi when placing the hadith in his chapter. (See Riyadh al-Solihin, 481) Furthermore, reviling something is not among the good attributes that Allah SWT love, for every believer are sanctioned to portray good character and conduct. The reason is, Islam emphasizes the beauty of good character. This is mentioned in a sahih hadith from Abu Hurairah RA, where the Prophet PBUH said:

"I was sent to perfect good character."

Lastly, may Allah SWT give us understanding in this religion and make us from among His slaves who are of good character and conduct. Amin.