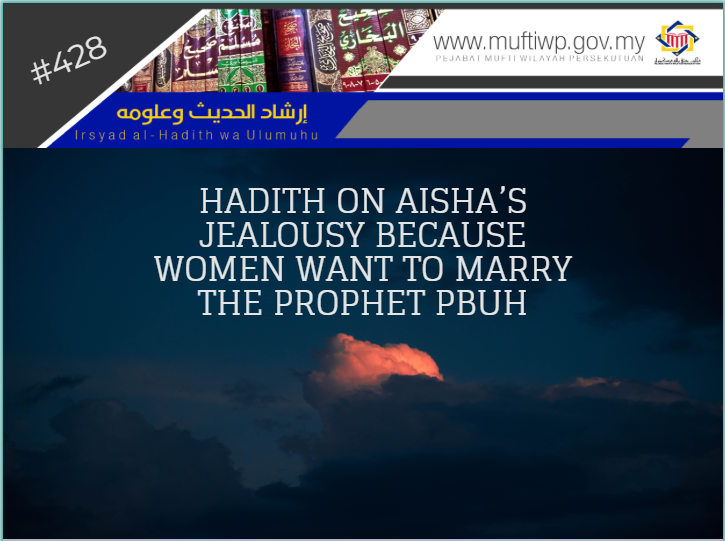 I once heard a hadith where Saiyidatina Aisha R.Anha was jealous because many women offer themselves to be married to the Prophet PBUH. Can SS Mufti explain the hadith?

“… and a believing woman if she gives herself to the Prophet [and] if the Prophet wishes to marry her, [this is] only for you, excluding the [other] believers. We certainly know what We have made obligatory upon them concerning their wives and those their right hands possess, [but this is for you] in order that there will be upon you no discomfort. And ever is Allah Forgiving and Merciful.

You, [O Muhammad], may put aside whom you will of them or take to yourself whom you will. And any that you desire of those [wives] from whom you had [temporarily] separated - there is no blame upon you [in returning her]. That is more suitable that they should be content and not grieve and that they should be satisfied with what you have given them - all of them. And Allah knows what is in your hearts. And ever is Allah Knowing and Forbearing.”

The cause for revelation of this verse is because many women at that time offered themselves to be married to the Prophet PBUH. Narrated by Abu Hisham RA:

Khaula bint Hakim was one of those ladies who presented themselves to the Prophet (ﷺ) for marriage. `Aisha said, "Doesn't a lady feel ashamed for presenting herself to a man?" But when the Verse: "(O Muhammad) You may postpone (the turn of) any of them (your wives) that you please,' (33.51) was revealed, " `Aisha said, 'O Allah's Messenger (ﷺ)! I do not see, but, that your Lord hurries in pleasing you.'"

Another narration is by Aisha R.Anha herself:

I felt jealous of the women who offered themselves to Allah's Messenger (ﷺ) and said: Then when Allah, the Exalted and Glorious, revealed this:" You may defer any one of them you wish, and take to yourself any you wish; and if you desire any you have set aside (no sin is chargeable to you)" (xxxiii. 51), I ('A'isha.) said: It seems to me that your Lord hastens to satisfy your desire

According to Imam al-Nawawi, the words of Aisha means Allah SWT give leniency, wideness and choice towards the Prophet PBUH in many things. (Refer Syarh al-Nawawi ‘ala Muslim 10/50)

While according to Imam al-Qurtubi, the words of Aisha comes from the feeling (al-ghirah) and the need of being pampered and consoled by the Prophet PBUH (al-dallal), and this matter may be seen in two other situations related to the Prophet PBUH and Aisha R.Anha.:

'O `Aisha! Allah has declared your innocence!' Then my Mother said to me, 'Get up and go to him (i.e. Allah's Messenger (ﷺ)). I replied, 'By Allah, I will not go to him, and I praise none but Allah

Attributing lust and desire towards the Prophet PBUH is something that should be avoided as a form of honoring the Prophet PBUH. Imam al-Qurtubi also added, how good it is if Aisha substitute the phrase ‘hawa’ with ‘redha’, and surely, this is far better and more appropriate. (Refer Al-Mufhim lima Asykala min Talkhis Kitab Muslim 4/211)

While according to Sheikh Nuruddin al-Sindi, Aisha R.Anha views the actions of the women who offer themselves to be married to as an indecent behavior, and she (Aisha) wanted to prevent the Prophet PBUH from getting involved with the matter. While the words “It seems to me that your Lord hastens to satisfy your desire” is a form of metaphor by Aisha which indicates that she did not have bad perceptions towards the women anymore after the above saying of Allah SWT is revealed which gives choices to the Prophet PBUH to marry those women or not.

In other words, Aisha seemingly wants to say: Before, I forbid the women from offering themselves to be married to the Prophet PBUH, but when I found out that Allah SWT is the One who fulfill the desire of the Prophet PBUH, I become content with the situation. (Refer Hasyiyah al-Sindi ‘ala Sunan al-Nasa’ie 6/54)

Consequently, we state that the words of Saiyidatina Aisha R.Anha comes from the feeling of jealousy which is a human nature, and the words are forgiven by syarak.

Saiyidatina Aisha R.Anha as an ummul mu’minin, a god-fearing person and whose heart is filled with faith also did not have the intention to go against the commandment of Allah SWT and His Prophet PBUH. However, as a mere human being, she also has the attributes of a human which is created by Allah within each human.