IRSYAD AL-HADITH SERIES 436: THE REWARDS OF NIGHT PRAYERS THE SAME AS OBSCURED CHARITY 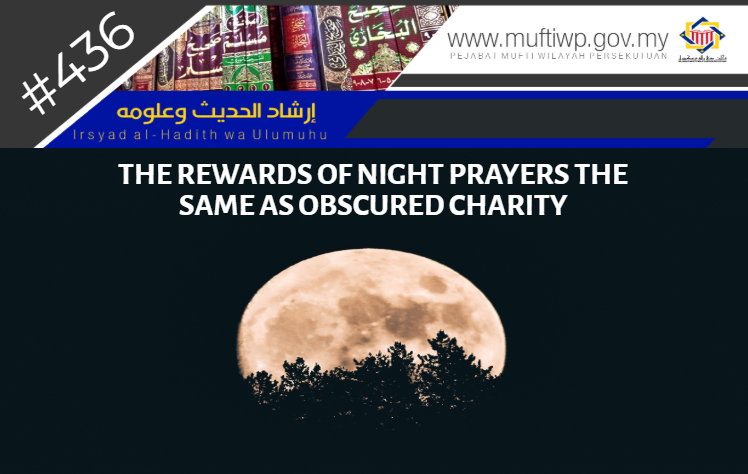 Is it true that there is a hadith regarding the benefit of night prayer the same as obscured charity?

Night prayer is a prioritized prayer that is performed after the obligatory prayers. This is in accordance with an authentic hadith from Imam Muslim:

“And the most excellent prayer after what is prescribed is prayer during the night.”

According to the above question, there is a narration from Imam al-Thabarani in Mu’jam al-Kabir regarding the benefits of night prayer which are the same as obscured charity:

Narrated by al-Thabarani (10382) [Imam Ibn Rejab said the sanad of the hadith is marfu’ and mawquf. However, mawquf is more accurate. Imam al-Suyuthi state the hadith is dhaif (weak) and Syeikh al-Albani also said the same]

Reviewing several of the opinions above, we would like to state that the hadith that mentioned the benefits of prayers during the night is the same as obscured charity is dhaif (weak). However, even though it is weak, there are several other benefits of night prayers according to the Quran and hadith.

Furthermore, the Prophet PBUH always perform night prayers as he is commanded by Allah in surah al-Muzammil:

“O you who wraps himself [in clothing], Arise [to pray] the night, except for a little - Half of it - or subtract from it a little, or add to it, and recite the Qur'an with measured recitation.”

Syeikh Wahbah al-Zuhaili in his commentary said that the verses of this surah start with the commandment from Allah SWT to the Prophet PBUH to perform night prayers, even if it is for a small portion of the night and to recite the Quran to strengthen the spiritual part of the Prophet PBUH. (See Tafsir al-Munir, 29/188)

To conclude, the above hadith is dhaif (weak) but it does not reject the benefits for people who perform prayers during the night. Lastly, may Allah SWT make us from among His slaves who always perform the night prayers. Amin.