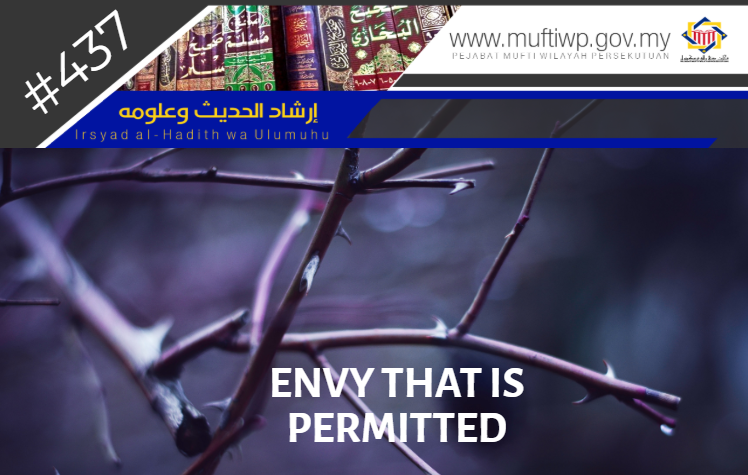 I once heard there is a hadith which categorized envy into several categories and there is a category that is permitted in syarak. Can SS Mufti state the hadith and explained about it?

Envy is a prohibited attribute in Islam and Allah SWT commanded us to seek protection from Allah SWT from the evils of envy. Allah ‘Azza wa Jalla state:

“And from the evil of an envier when he envies."

However, there is a hadith that state an exception in being envy or jealous. The Prophet PBUH said:

According to Imam Hajar al-‘Asqalani, the term envy in the hadith actually means al-ghibtoh (الغبطة) which is our desire or want to receive the blessing just like of another person, without wanting the blessing from being taken away from the said person and the term hasad (envy) is used metaphorically. This desire is also said as competition (munafasah) and is a good attribute if it involves matters of obedience. (Refer Fath al-Bari 1/167)

According to Syeikh Badruddin al-‘Aini, Imam al-Bukhari exclude the term hasad (envy) from its literal meaning to its metaphorical meaning and thus, this is the reason Imam al-Bukhari placed the hadith under the title al-I’tibat fi al-Ilm wa al-Hikmah (the desire to attain the blessing of knowledge and wisdom). (Refer ‘Umdah al-Qari Syarh Sahih al-Bukhari 2/56)

To conclude, feelings of envy is basically prohibited, as clearly stated through the verses of the Quran and hadith stated above.

As for envy which is permissible is only for good things, and it is basically not described as hasad, but as desire/wants (ghibtoh/raghbah) to be blessed with the same blessings, so that we could increase our worships that could drive us closer to Allah SWT and not with any desire that the blessing will be taken away from another.