IRSYAD AL-HADITH SERIES 442: A PERSON WHOSE NAME IS AHMAD, WILL ENTER PARADISE WITHOUT HISAB (RECKONING) 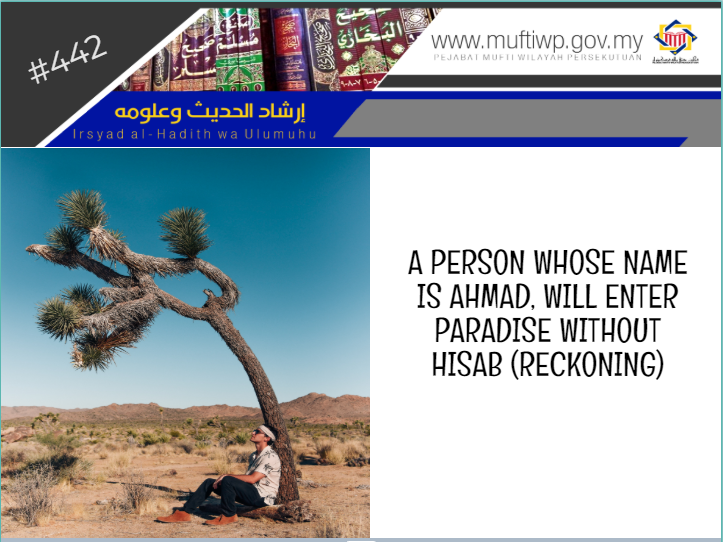 Assalamualaikum w.b.t. I have a question. What is the status of the hadith, ‘Whose name starts with Ahmad, then he will enter the paradise without hisab’. I once heard about this hadith when listening to a religious lecture near my house. Hope for an explanation from ustaz. Thank you, ustaz.

We already discussed on the danger of mawdu’hadith (fake / fabricated) in Irsyad al-Hadith series 249 [1]. In that article, we have discussed in detail on mawdu’ hadith and our obligation to deal with it.

Coming back to the question asked, after doing a thorough reading on the muktabar books of hadith, we do not find a source of that particular hadith. We found that it is of no origin. However, there is a qudsi hadith which carries almost the same meaning. The hadith states:

“Indeed, I (Allah) hold an oath upon Myself that whoever with the name of Ahmad or Muhammad shall never enter the hellfire”

This hadith is cited by al-Zahabi in Tartib al-Mawdua’t. He stated that this hadith is mawdu’ because in its sanad there are narrators which are majhul or by the term said as سنده مظلم. Also, in its sanad, there is a narrator named Humaid al-Tawil. He is a liar. (Refer Tartib Al-Mawdu’at, 33).

In the narration context, the stated hadith is a mawdu’ hadith. This is because, it is not found in any muktabar books of hadith. In fact, it is never narrated by any muktabar muhaddithin before.

While in the dirayah context, one enters the paradise not only due to his name or lineage, but due to his good deeds performed while living in the dunya. As narrated by Abu Hurairah RA, the Prophet PBUH said:

Syeikh Mawlana Muhammad Shamsul Haq al-‘Azim Abadi said that this hadith means whoever neglects his actions and always commit evildoings that will delay him from entering paradise, then during that time, his genealogy will not give any benefit upon him. (Refer ‘Aun Al-Ma’bud Fi Syarh Sunan Abi Daud, 4/4).

Yes, indeed. One may enter the paradise by Allah’s blessings in accordance with a hadith where the Prophet PBUH said:

None amongst you would attain salvation purely because of his deeds. A person said: Allah's Messenger, even you? Thereupon he said: Yes, not even I except that Allah wraps me in Mercy

Still, it is not an excuse to not do good and obey all of Allah’s commandment. To attain Allah’s mercy, we should obey all His commands and do more good deeds. This may be seen through the saying of Allah SWT:

Indeed, those who have believed and those who have emigrated and fought in the cause of Allah - those expect the mercy of Allah. And Allah is Forgiving and Merciful.

This verse states the attributes of those who migrate and fight in the cause of Allah as those who hope for Allah SWT’s mercy. Both are good deeds which are commanded by Allah SWT. This shows that there is connection between deeds and Allah’s mercy. To attain Allah’s mercy, steadfast in doing good deeds is important.

Even if one has the same name as our Prophet PBUH either Muhammad or Ahmad, but never do good deeds and never follow his Sunnah, then names have no guarantee on one’s entering Paradise. What is more important is following and practising the Prophet PBUH’s Sunnah. Allah SWT says in the Quran:

Say, [O Muhammad], "If you should love Allah, then follow me, [so] Allah will love you and forgive you your sins. And Allah is Forgiving and Merciful."

Syeikh Mustafa al-Maraghi states that this verse means if one claims that he loves Allah, then he should follow the Prophet PBUH in every aspect. Follow the revelation revealed to the Prophet. (Refer Tafsir Al-Maraghi, 3/140).

The Prophet PBUH once stated the characteristics of individuals who will enter the paradise without hisab. Among them is a hadith narrated by Abu Hurairah RA. The Prophet PBUH said:

'This is your nation out of whom seventy thousand shall enter Paradise without reckoning.' "Then the Prophet (ﷺ) entered his house without telling his companions who they (the 70,000) were. So the people started talking about the issue and said, "It is we who have believed in Allah and followed His Apostle; therefore, those people are either ourselves or our children who are born m the Islamic era, for we were born in the Pre-lslamic Period of Ignorance.'' When the Prophet (ﷺ) heard of that, he came out and said. "Those people are those who do not treat themselves with Ruqya, nor do they believe in bad or good omen (from birds etc.) nor do they get themselves branded (Cauterized). but they put their trust (only) in their Lord "

In fact, there are other attributes of the individuals who will enter paradise without hisab as stated by the Prophet PBUH.

In conclusion, we are inclined to state that the stated hadith is a mawdu’ hadith because we do not find this hadith in any muktabar books. To the asatizah, beware in stating something especially when it is related to the hadith of the Prophet PBUH. Please verify the hadith meant to be said to the public and never state something to be of the Prophet PBUH’s words without careful consideration.

May we always obey the Sunnah of the Prophet PBUH in our daily life. Wallahua’lam.