IRSYAD AL-HADITH SERIES 452: THE DRYING UP OF LAKE TIBERIAS IS A SIGN OF THE LAST DAY 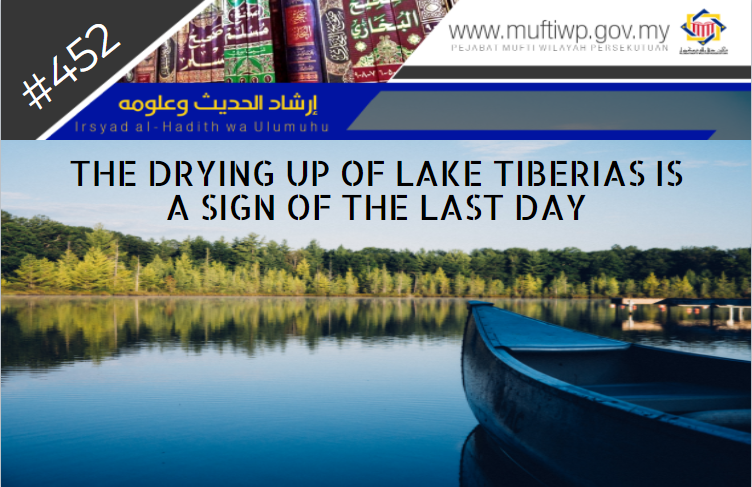 Assalamualaikum SS Datuk Mufti. Is it true that during the ends of times Lake Tiberias will dry up because Gog and Magog (Ya’juj and Ma’juj) drank it up?

Before we discuss regarding the drying up of Lake Tiberias during the end of times from the validity perspective according to the evidences in Quranic and prophetic evidences of the Prophet PBUH, it is best if we first learn the location of this lake.

The Galilee sea, as well as the Gennesaret lake, Kinneret lake, Tiberias lake (in Hebrew: ים כנרת, in Arabic: بحيرة طبرية‎) located the Golan hill. It is the largest freshwater lake in the middle east and has the perimeter of 53 km (33 miles) and the length is approximately 21 km (13 miles) and 13 km (8 miles) wide. This lake has an area of 166 km2 and a maximum depth of approximately 43 m (141 feet). At the depth of 209 meters under sea level, it is the lowest freshwater lake on earth and the second lowest lake in the world (after the Dead Sea which is a salt water lake).

Kinneret is located far away in the Great Slide Jordan, a valley created by the division of the African and Arab plates and most of its water source is from underwater although the main source is from the Jordan river which flows from north to south. This situation depends on earthquakes and in previous times by the volcanic activity. This is proven with the discovery of numerous basalt and igneous rocks which is assessed as the geological area of Galilee. (https://ms.wikipedia.org/wiki/Laut_Galilee)

According to the above question, here we include parts of the hadith which narrates the situation as narrated by Imam Muslim in a long hadith:

Imam Mulla Ali al-Qari when commenting on the hadith which states Gog and Magog would drink from the water of Lake Tiberias until among the last of them who drink it would say to the one who precedes it, once there was water at the lake or place. (See Mirqah al-Mafatih, 8/3463). Furthermore, Imam al-Qurtubi stated in his book that Gog and Magog would drink from this lake. (See al-Tazkirah, 779)

Thus, in the hadith it is clear that the water from Lake Tiberias would dry up because Gog and Magog will drink it all up when they emerge in the end of times and this shows the sheer number of them as stated in the Quran and by the Prophet PBUH, they would descend from every elevation.

“Until when [the dam of] Gog and Magog have been opened and they, from every elevation, descend,”

To conclude, the hadith which mentioned that the lake of Tiberias would dry up is a sahih hadith. Moreover, this incident would happen in the end of times when the Gog and Magog emerges of which it is among the major signs of the Last day. Lastly, may Allah SWT protect us from fitnah and make us from among His believing slaves. Amin.