IRSYAD AL-HADITH SERIES 458: THE MEANING OF COVENANT AND PROMISE IN SAYYID AL-ISTIGHFAR 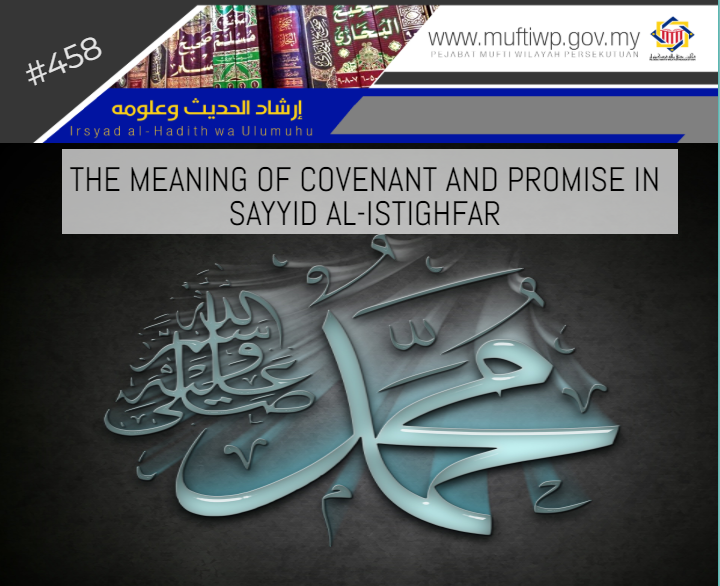 “O Allah! You are my Lord. None has the right to be worshipped except You. You created me and I am your servant and I abide by your covenant and promise as best I can. I seek refuge in you from the evil, which I have committed. I acknowledge your favor upon me and I knowledge my sins, so forgive me, for verily none can forgive sin except you.”

What is the meaning of al-‘ahd (العهد) and al-wa’d (الوعد) which translated as covenant and promise in the context of this hadith?

Alhamdulillah, praise and thanks to Allah for the لإcountless blessings He has blessed us all with. Blessings and salutations to the Prophet Muhammad PBUH, his wives, his family, companions and all those that follow his teachings to the day of judgement.

The above hadith is narrated by Syaddad bin Aus through marfu’ (elevated) narration to the Prophet PBUH and is included by Imam al-Bukhari in his Sahih (no. 6306). Among the virtues of reciting it is if one passes away while reciting and believing firmly in it, he will be considered as the people of Paradise.

In commenting on the hadith, Imam Ibn Battal states in his Syarah Sahih al-Bukhari (10/76): “al-‘Ahd (العهد) means a covenant which Allah take from His slaves in the beginning of their (humans) creation, when He take them out of their father’s backbone (Adam) like an atom and witness them testifying upon themselves: "Am I not your Lord?" They said, "Yes (You are our lord), we have testified.". So, they testify on Allah’s Godly nature when they were in their original form, they bow down and obey on His Wahdaniyyah attribute. While al-wa’d means Allah’s promise upon them that whoever dies without associating Allah with anything, then committing what is obligated by Allah upon them, then they will enter Paradise. Each believer should pray to Allah SWT to make them die in (holding firmly on) their covenant as well as in iman, so that they will achieve what is promised by Allah SWT for those who obey as it is following the Prophet PBUH’s way in making du’a on this matter. This is the same as what is asked by the prophets AS in their du’as. The du’a of the Prophet Abraham AS:

and keep me and my sons away from worshipping idols.

While (the Prophet) Yusuf said:

Cause me to die a Muslim and join me with the righteous.

And our Prophet PBUH said:

"And if You (Allah) want fitnah to take place among humans, then take my soul to meet You while I am free of any fitnah."

Narrated by Malik in al-Muwatto’ (no.40)

Our Prophet PBUH taught his ummah through his saying:

“I abide by your covenant and promise as best I can,”

Based on the above statement, we may understand that the phrase al-‘ahd means covenant made by humans when they were in alam ruh (realm of the souls) to Allah SWT to always uphold their tawhid and obey His commandments. While al-wa’d refers to Allah’s promise that humans who follow all His commandments will enter Paradise.

“And the words of Ibn Battal ‘and obeying what has been obligated to him’ is the addition and not the condition in this context. This is because the Prophet PBUH states the meaning of al-‘ahd as mithaq (stated covenants) taken from Alam Dzar (alam ruh) which is the tawhid specifically, while al’wa’d is a promise for whoever dies in the stated state (upholding firmly on the covenant in tawhid) they will enter Paradise. Ibn Battal also stated that ‘according to their capabilities’ means the Prophet PBUH taught his ummah the nature of man is he is unable to obey all commandments for the sake of Allah and is unable to keep his promise to obey all commandments perfectly as well as being grateful for all the blessings. Hence, Allah who is also the Most Kind and Gentle towards His slaves does not obligate responsibilities except of what they are capable of.”

The above statement means Allah know the nature of a human who has limitation to obey all commandments. Hence, He put benchmark according to their capabilities. This is also the ethics taught by the Prophet PBUH to all of us when making du’a to acknowledge our weaknesses and hoping that Allah will have mercy on us for our shortcomings in obeying Him. Wallahua’lam.

May this explanation give us the motivation to increase our worship and perfecting them solely for Allah SWT. Ameen.