IRSYAD AL-HADITH SERIES 489: THE PROPHET ABRAHAM AS REFUSE TO MAKE DU’A WHEN THROWN IN THE FIRE 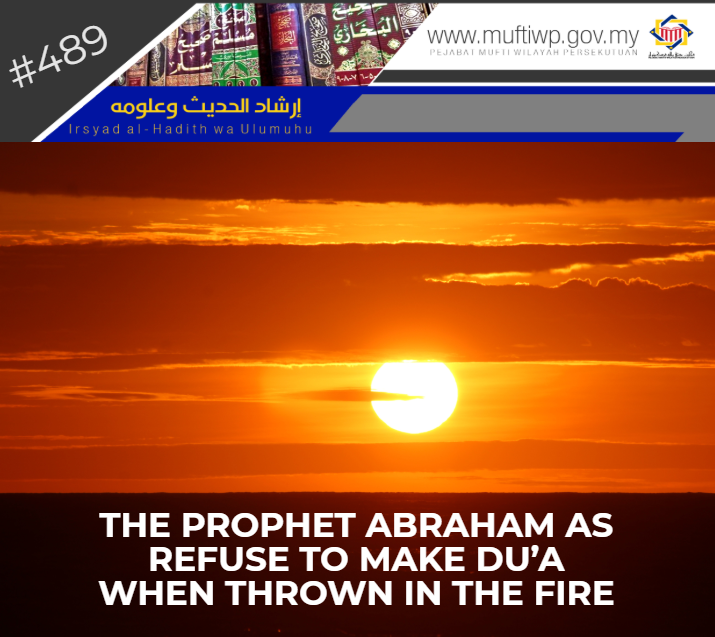 Assalamualaikum ustaz. May ustaz and all other staffs of the Mufti’s Office are safe from the COVID-19 pandemic outbreak in our country. I would like to ask one question which is unrelated to the issue. I heard from a person that it is unnecessary for us to make du’a as there is a story where the Prophet Abraham AS also did not make du’a when he was thrown in the fire. Is this story authentic? Hope for an explanation from ustaz because I feel troubled with what was said to me. Especially when people call him as ustaz. Thank you, ustaz.

It is irrefutable that du’a is a form worship. In fact, Allah SWT commands His servants to make du’a in his saying:

And your Lord says, "Call upon Me; I will respond to you." Indeed, those who disdain My worship will enter Hell [rendered] contemptible.

Sheikh Mustafa al-Maraghi stated, it is understood from the verse that du’a is a form of worship. In fact, in this verse, there is a great warning upon those who are boastful and refuse to make du’a to Allah. This is Allah’s mercy upon His servants. This is the goodness that Allah SWT taught us. Therefore, refusal to make du’a is likely refusing goodness that Allah gives to us. Allah wants us to keep having tawakkal and to ask Allah for whatever we wish for. Allah SWT will surely respond to it. (Refer Tafsir Al-Maraghi, 24/88).

Some people strive days and nights in search for provision, but they forget the existence of Allah who hears all whispers and wishes. Some have been infected with serious diseases that they lose thousands of their money. However, they forget that while putting an effort, they should also raise their hands and ask Allah to be cured of their sickness.

Coming back to the question presented, the story which claims that the Prophet Abraham AS refused to make du’a is a popular story said to be about him and is spread widely. We cite first the narration:

“When the Prophet Ibrahim AS being thrown in the fire by a ballista, Gabriel came to him to meet him. Gabriel said: O Ibrahim, do you have any request? Ibrahim AS answered: I have no request from you. Gabriel said: Ask from you Lord. Ibrahim AS said: I need not to ask from Him, it is enough for Him to know of my condition”.

This narration is narrated in some tafsir books. Among them are Anwar Al-Tanzil Wa Asrar Al-Ta’wil by Al Baidhawi (4/208) when commenting on verse 69 of Surah al-Anbiya’. The same for al-Baghawi where he also cited this story in his book Ma’alim Al-Tanzil (5/327). However, this story is narrated by al-Baghawi using sighah tamrid which means it is narrated without sanad like other narrations he put in his book before. He only states:

“It was narrated by Ubai bin Ka’ab…”

This seemingly indicates that this story is not sahih according to his view. He cited it as a reminder that verse 69 of Surah al-Anbiya’ also is commented by this story. Imam al-Qurtubi also cited the story in his book Al-Jami’ Li Ahkam Al-Quran (11/303).

Even if it is cited in the books of tafsir, it does not necessarily mean that the story is sahih. In fact, we do not find this story in any accredited books of hadith. Besides, the story is also criticized widely by the experts of hadith while analyzing the narrations.

Among them is what is mentioned by Sheikh Nuruddin Ali bin Muhammad bin Iraq al-Kinnani. He said:

My Lord, make me an establisher of prayer, and [many] from my descendants. Our Lord, and accept my supplication. (40) Our Lord, forgive me and my parents and the believers the Day the account is established." (41)

In other verses, Allah records the du’a of Prophet Abraham AS:

[And he said], "My Lord, grant me authority and join me with the righteous. (83) And grant me a reputation of honor among later generations. (84) And place me among the inheritors of the Garden of Pleasure. (85) And forgive my father. Indeed, he has been of those astray. (86) And do not disgrace me on the Day they are [all] resurrected – (87)

These are several du’a of the Prophet Abraham AS which he recited to Allah SWT which proves that it contradicts the fake narration above which portrays that he refuses to make du’a.

In conclusion, the narration and words which are said to be of the Prophet Abraham AS where in that story, it is stated that he refuses to make du’a when he was asked by Gabriel AS is a fabrication and to refer it to be from him is untrue and not sahih. It contradicts with what Allah SWT states and records about him in the Quran.

May Allah distance us from the attribute of loving to spread story or narration which are untrue and fabricated. Wallahua’lam.