IRSYAD AL-HADITH SERIES 490: THE STATUS OF THE HADITH “A PERSON STAYING AT HOME DURING AN EPIDEMIC WOULD RECEIVE AN EQUIVALENT REWARD OF A MARTYR” 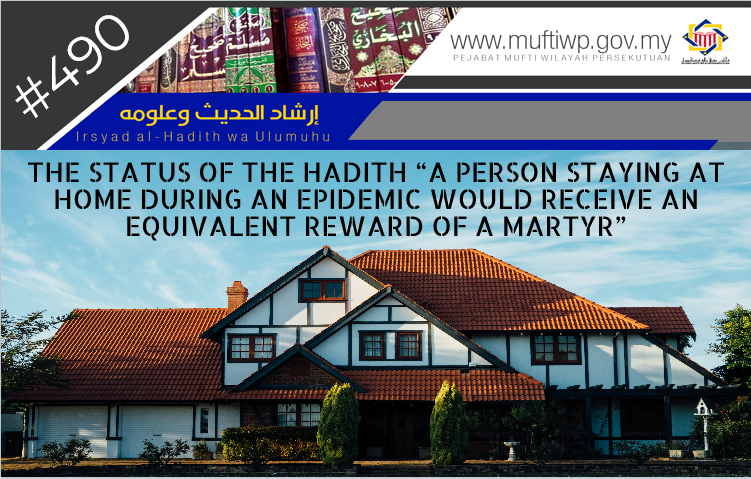 Assalamualaikum ustaz, in the current COVID-19 pandemic, a lot of people are sharing a hadith which states: “Whoever stays in his house during a disease outbreak, then he would receive the rewards of a martyr even if he did not die.” My question is, is this hadith sahih and can you explain the fiqh of this hadith?

In this matter, there are several narrations that are used as a support for the encouragement. Among them is hadith narrated from Ummu al-Mu’minin S’isayh R.Anha, she said: I asked Allah's Messenger (ﷺ) about the plague. He told me that:

“It was a Punishment sent by Allah on whom he wished, and Allah made it a source of mercy for the believers, for if one in the time of an epidemic plague stays in his country patiently hoping for Allah's Reward and believing that nothing will befall him except what Allah has written for him, he will get the reward of a martyr."

Coming back to the above question, the wording of the hadith refers to a hadith narrated by Ummu al-Mu’minin A’isyah R.Anha, she said: I asked Allah's Messenger (ﷺ) about the plague. He said,

"That was a means of torture which Allah used to send upon whom-so-ever He wished, but He made it a source of mercy for the believers, for anyone who is residing in a town in which this disease is present, and remains there and does not leave that town, but has patience and hopes for Allah's reward, and knows that nothing will befall him except what Allah has written for him, then he will get such reward as that of a martyr."

Syeikh Syu’aib al-Arna’uth in his tahqiqan of Musnad Ahmad when commenting on this hadith said: The isnad of this hadith is sahih according to the conditions set by Imam al-Bukhari. Refer Musnad Ahmad cet. Muassasah Al-Risalah (43/235).

The above hadith explains the wisdom behind the outbreak of the plague that happened. Then, the Prophet PBUH explained that it is a blessing for the believers. The reason is it is stated in a tsabit narration that those who passed away due to the plague will receive the rewards of a martyr. This is according to a hadith from Abu Hurairah RA, he said that the Prophet PBUH said:

"Five are regarded as martyrs: They are those who die because of plague, Abdominal disease, drowning or a falling building etc., and the martyrs in Allah's Cause."

The hadith also explains that when punishment is sent, it would involve everyone regardless whether they are believers or not according to the will of Allah SWT, it is a form of punishment for the sinners and trial and blessings for the believers.

However, there are conditions stated in the hadith for a person to receive the rewards of a martyr; which is he has to stay in the state or his house during the outbreak of the contagious disease with patience and hope to attain the rewards from Allah SWT. At the same time increasing his faith that nothing could ever harm him unless it is the will of Allah SWT.

Syeikh Abu al-Hasan Ubaidullah al-Mubarakfuri in his commentary of the above hadith states:

If a person stays (in his country or home) in fear or regret that he did not get out, then he assumes that if he has left then surely, he wouldn’t have contracted the plague and believes that he would surely be infected by the plague because he is staying (in his country or house), thus, such people will not receive the rewards of a martyr even if he died because of the plague. This is the meaning of the mafhum (implied meaning) of the hadith as meant by mantuq hadith (pronounced meaning) that anyone who possess the stated characteristics will receive the rewards of a martyr even if he did not die because of the plague. Refer Mir’aat al-Mafatih, Abu Al-Hasan Ubaidullah Al-Mubarakfuri (5/239).

Is COVID-19 Categorized as a Type of Taun (the Plague)?

In answering this issue, we share the opinions of several scholars on the definition of the plague by lughah (Arabic language) scholars. Among them:

It is generally known that the COVID-19 is a contagious virus which causes a contagious disease that lead to large scale deaths. Thus, according to these characteristics then it can be concluded that it is equivalent to taun as stated in sahih hadiths.

To conclude, we end this statement with the following points:

We are even commanded to remain in our houses to stop the spread of the outbreak and this is meant by a hadith of the Prophet PBUH which states:

“If it (taun) breaks out in the territory you are in, do not go out fleeing away from it.”

This is also in line with a hadith narrated by Muadz bin Jabal RA, he said the Prophet PBUH mentions five matters that if a person performs any one of them, then he would be guaranteed of the protection of Allah SWT. Among them are:

“Or a person who stayed in his house that people are safe from him and he is safe from the people.”

Narrated by al-Thabarani in al-Mu’jam al-Kabir (55)

Lastly, we pray that Allah SWT would give us the accurate understanding in practising religion. Amin.