IRSYAD AL-HADITH SERIES 491: WHY WAS THE PROPHET PBUH NAMED MUHAMMAD? 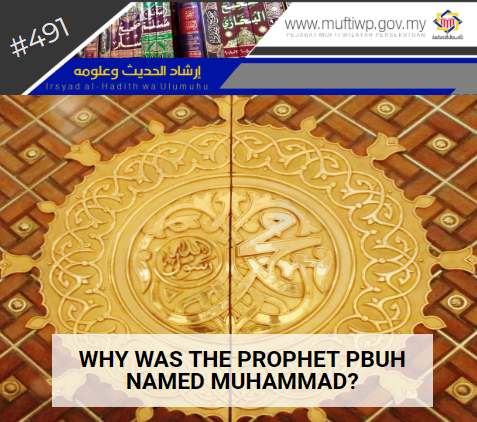 I have a question. Why is it the Prophet PBUH was named Muhammad? I hope for an explanation on this matter.

We start with the saying of the Prophet PBUH:

I have five names: I am Muhammad and Ahmad; I am Al-Mahi through whom Allah will eliminate infidelity; I am Al-Hashir who will be the first to be resurrected, the people being resurrected there after; and I am also Al-`Aqib (i.e. There will be no prophet after me).

Indeed, Allah SWT states in the Quran about the two names of the Prophet PBUH’s names which are Ahmad and Muhammad. Imam Ibn Hajar al-‘Asqalani stated that it is seemingly an indication that these two names are the two most popular among other names and the name Muhammad is the most popular among these two. (See Fath al-Bari, 6/555). Imam al-Suyuthi also states that Muhammad is the most popular name of the Prophet PBUH. (See al-Nahjah al-Sawiyyah fi al-Asma’ al-Nabawiyyah, pg. 41)

Then, Imam Ibn Hajar al-‘Asqalani cited from al-Qadi ‘Iyadh that:

Imam al-Suyuthi also cited the words of al-Qadi ‘Iyadh that both names which are Muhammad and Ahmad are included under one of Allah SWT’s greatness and the Prophet PBUH’s virtue. Allah SWT protect these two names from being used by any person before his time (The Prophet PBUH’s birth). Before he was born, there is no Arab or any other nation who use that name except after the spread of the news that a prophet is to be sent and will be named Muhammad. Therefore, few numbers of people had named their children with the name with the hope that they are the person meant. And Allah SWT the All-Knowing to whom He shall send His message to. (al-Nahjah al-Sawiyyah fi al-Asma’ al-Nabawiyyah, pg. 44)

Why the Prophet PBUH is named Muhammad?

Coming back to the question asked, Imam Ibn ‘Asakir stated in his book from the narration of Ibn ‘Abbas RA that:

When the Prophet PBUH was born, Abd al-Muttalib did aqiqah for him by slaughtering a ram and named him Muhammad. He was asked: “O Abu al-Harith, what made you name him Muhammad and not with the name of your ancestors?” He answered: “I want for Allah SWT to praise him in the heaven and people to praise him on the earth.” (See Tarikh Dimashq, 3/32)

When the Prophet PBUH was born (to the world), Abd al-Muttalib threw a feast for him. While eating, the guests asked him: “Have you named him?” He answered: “Muhammad”. They also asked: “What has prevented you from naming him with his family name?” He answered: “I would like to (have hope) for Allah SWT to praise him in the heaven and people to praise him on earth.” (See Fath al-Bari, 7/163)

This is aligned with the meaning of the phrase ‘Muhammad’ itself which means a commendable person and in it the meaning of al-Mubalaghah which is the most commendable one. Besides, as known by people that prophets are those who praise Allah SWT the most and the Prophet PBUH is a person who has the most praise towards Allah SWT and also the most praised among the prophets (أَكْثَرُهُمْ حَمْدًا) or whose attributes are the most praised on (أَعْظَمُهُمْ فِي صِفَةِ الْحَمْدِ) (See Fath al-Bari, 6/555). The same, Sheikh Ibn al-Uthaimin when commenting on the saying of Allah SWT in surah al-Saff verse 6 stated that Prophet Muhammad PBUH is the most commendable person and the most rightful to be praised. (See Syarh al-Manzumah al-Baiquniyyah, pg. 24)

May Allah SWT give us the strength to follow the Prophet PBUH as well as making him our best example in every matter. Amin.