IRSYAD AL-HADITH SERIES 493: THE COMPANIONS WHO NARRATE HADITH FROM THE TABI’IN 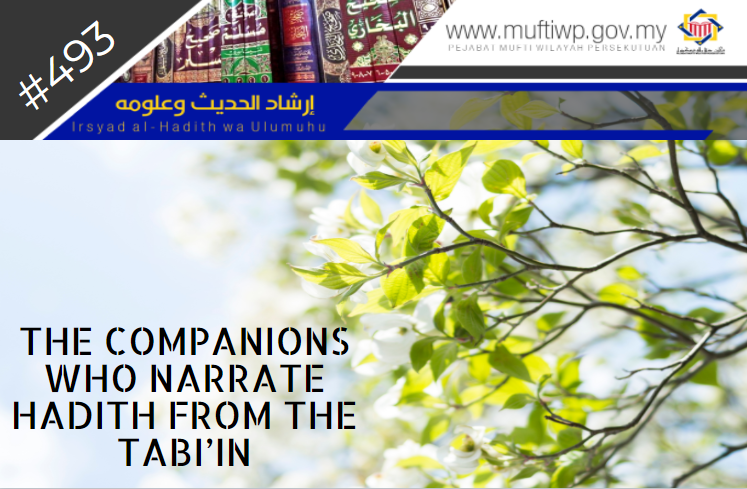 I once heard that there are companions of the Prophet PBUH who narrated hadiths from the tabi’in. Is this true? Jazakallah kahir.

Hadith scholars places a chapter in the science of hadith which is a chapter of learning riwayah al-akabir ‘an al-asoghir (رواية الأكابر عن الأصاغر), which means narration of a greater scholar from a lesser scholar. According to Syeikh Ahmad Syakir, one of the types of narrations in this category is the narration of the Companions R.Anhum from the tabi’in. (Refer al-Ba’ith al-Hahith Syarh Ikhtisar ‘Ulum al-Hadith, pg. 387)

According to Imam Ibn al-Mulaqqin al-Syafie, riwayah al-akabir ‘an al-asoghir is also known with the name riwayah al-fadhil ‘an al-mafdhul (narration of a prioritized person from the less prioritized) and riwayah al-syeikh ‘an al-tilmiz (the narration of a teacher from his student). Among the examples of this is the narration of al-Zuhri, Yahya bin Sa’id and Rabi’ah from Imam Malik. (Refer al-Tazkirah fi ‘Ulum al-Hadith pg. 23-24)

According to Imam Mulla ‘Ali al-Qari, among the wisdoms behind the existence of this category, narration of a teacher from his student, or a greater scholar to a lesser scholar is a form of rejection towards an ignorant and arrogant person who refuses to learn from a person whose status is lower than him or less famous than he is. Allah SWT states:

“I will turn away from My signs those who are arrogant upon the earth without right;”

"The wise statement is the lost property of the believer, so wherever he finds it, then he is more worthy of it."

Narrations of Companions from Tabi’in

According to Imam al-Zarkasyi, Imam Ibn Solah included the category of narration by the Companion from the tabi’in under the category riwayah al-akabir ‘an al-asoghir, and Imam al-Khatib al-Baghdadi collected a sum of around 20 of these narrations. (Refer al-Nukat ‘ala Muqaddimah Ibn al-Solah 1/67)

Imam Ibn Hajar al-‘Asqalani wrote a book titled Nuzhah al-Sami’in fi Riwayah al-Sohabah ‘an al-Tabi’in in simplifying and rearranging the work of Khatib al-Baghdadi who collected the narrations of the Companions from the tabi’in.

One of them is Abdullah bin Umar bin al-Khattab R.Anhuma who narrated a hadith from a tabi’in named Abdullah bin Muhammad bin Abu Bakar (the grandchild of Abu Bakar al-Siddiq RA), where Aisyah R.Anha said that the Prophet PBUH said to her:

"Do you know that when your people (Quraish) rebuilt the Ka`ba, they decreased it from its original foundation laid by Abraham?" I said, "O Allah's Messenger (ﷺ)! Why don't you rebuild it on its original foundation laid by Abraham?" He replied, "Were it not for the fact that your people are close to the Pre-Islamic Period of ignorance (i.e. they have recently become Muslims) I would have done so.”

The same with a hadith narrated by Jabir bin ‘Abdillah RA who narrated a hadith from Ummu Kalthum (the daughter of Abu Bakr al-Siddiq RA) where Saidatina Aisyah R.Anha said:

According to Imam al-Nawawi, Ummu Kalthun is among the women tabi’in, while Jabir is one of the companions of the Prophet PBUH whose standing and age are surely greater than Ummu Kalthum. (Refer Syarh Sahih Muslim 4/42. Also refer to Mustakhraj Abi ‘Awwanah 3/93)

Next is a hadith narrated by Mu’awiyah bin Abi Sufayn from Malik bin Yukhanir a tabi’in who narrated this hadith from Mu’az bin Jabal R.Anhum, where the Prophet PBUH said:

"A group of my followers will keep on following Allah's Laws strictly and they will not be harmed by those who will disbelieve them or stand against them till Allah's Order (The Hour) will come while they will be in that state."

The same is for a hadith from Umar al-Khattab RA who narrated that the Messenger PBUH said:

“Should anyone fall asleep and fail to recite his portion of the Qur'an, or a part of it, if he recites it between the dawn prayer and the noon prayer, it will be recorded for him as though he had recited it during the night.”

In short, there are some companions of the Prophet PBUH R.Anhum who narrated hadiths from the tabi’in and it is categorized under riwayah al-akabir ‘an al-asoghir (رواية الأكابر عن الأصاغر), which means narration of a teacher from a student or a greater scholar from a lesser scholar. However, the number is small and rarely happens.