IRSYAD AL-HADITH SERIES 494: THE FAME AND CONTRIBUTION OF IMAM ABU HANIFAH IN THE FIELD OF HADITH 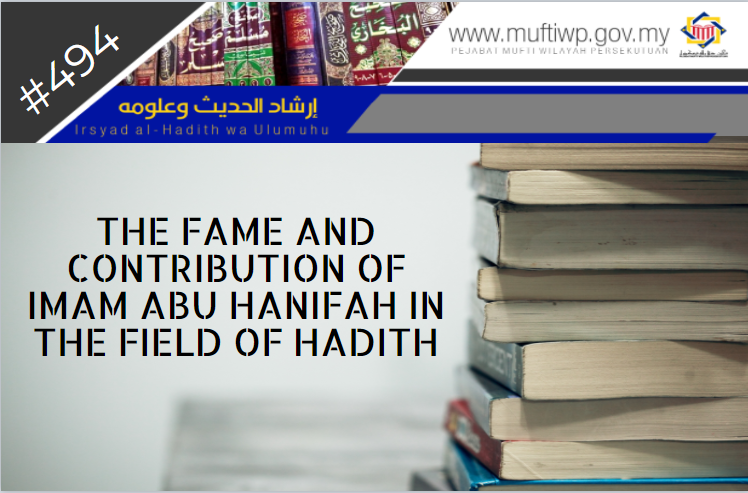 Can you explain some of the fame and contributions of Imam Abu Hanifah in the field of hadith? Jazakallah khair.

The Reputation and Stature of Imam Abu Hanifah

Imam Abu Hanifah was born in Kufah, Iraq in the year 18 Hijrah. His real name is Al-Nu’man bin Thabit bin Marzuban. He is of Persian lineage and his grandfather embraced Islam during the rule of Saidina Umar al-Khattab.

Imam Abu Hanifah received his education from great tabi’in scholars such as Hammad bin Abi Sulaiman, Ato’ bin Abi Rabah, Abdul Rahman bin Hurmuz, Ikrimah, Nafi’, Amru bin Dinar and Qatadah. There are too many praises cited by scholars who lived during his time, among them are:

Abdullah bin al-Mubarak said: “He is the most faqih person.”

Imam al-Syafie said: “Humans depend and are indebted to Abu Hanifah in the field of fiqh.”

Imam Abu Hanifah said: “People are in the state of goodness for as long as they are among them who learn hadith. When they learn knowledge without hadith, surely they would be ruined.” He also once said: “You should follow the sunnah of the Prophet PBUH, whoever deviate from this road, then he would get lost.” (Refer Al-Mizan al-Kubra, 1/50-51)

Imam al-Zahabi stated that Imam Abu Hanifah learn hadith for 50 years, which started in 100 Hijrah until his death. (Refer Siyaar A’lam al-Nubalaa’ 6396). Considering the long time he spent studying hadith, then it is hard to accept the opinion which state that he is weak in the field of hadith.

It should also be known that fiqh Imam Abu Hanifah himself stands on sahih hadiths. Due to this, al-Sayyid al-Murtadha al-Zabidi wrote a book titled ‘Aqd al-Jawahir al-Munifah fi Adillah Abi Hanifah which collected hadiths in Musnad Abu Hanifah which is also included in kutub al-sittah.

“Indeed, Imam Abu Hanifah is among al-hafiz in the field of hadith, it is narrated that he has taken hadith from 4 thousand teachers from among the tabi’in and others and this is stated by Imam al-Zahabi himself in the book al-Mumti’ and Tobaqat al-Huffaz min al-Muhaddithin. If he is not focused on hadith, surely, he would not be able to extract fiqh rulings.

As for the small number of narrations from him, it shows that just a small number of hadiths that he knows, however, there are two reasons for this, (one of them is) it shows his main focus is on istinbat from the hadith, not narrating them and this is the same as Imam Malik and Imam Syafi’e who did not narrate a lot of hadiths to their students.” (Refer ‘Uqud al-Jaman fi Manaqib al-Imam al-A’zham Abi Hanifah al-Nu’man pg. 319)

Abu hanifah is also acknowledged as an expert in the field of the knowledge of rijal (knowledge on the narrators of hadith). Imam al-Tirmizi narrated from Yahya al-Hammani where he heard Abu hanifah said: I never once saw a liar who is worse than Jabir al-Ju’fi and a man more honest than Ato’. This shows that Imam Abu Hanifah himself acknowledged the opinion of Imam Abu Hanifah in evaluating narrators of hadith. Likewise, with other clear narrations which show that he has great knowledge in evaluating the status of the narrators of hadith, at the same time ruled him eligible to be acknowledged as an imam in the knowledge al-jarh wa al-ta’dil. (Refer Qawa’id fi ‘Ulum al-Hadith pg. 331)

Imam Abu Hanifah is also famous as a person who is very strict with his conditions in accepting a certain hadith. Among the conditions he set is that a hadith must be narrated from the memorization of the narrator. (Refer Muqaddimah Ibn Solah, pg. 208)

“Imam Abu Hanifah followed Hammad bin Sulaiman for a long time and Hammad is one who memorize numerous hadiths.

Likewise, it is not a condition for an ‘Alim to collect and memorize all the available hadiths, however it is sufficient for him to issue a fatwa when he has mastered the knowledge of al-Quran and a number of hadiths that is necessary for him to reach the truth through ijtihad. When he faces an issue of which is not within his knowledge of the Quran and hadith, it is permissible for him to ask other knowledgeable scholars in the science of hadith and if this is not enough, then he can use his own ijtihad and this is what is practised by Imam Abu Hanifah.

Furthermore, numerous renown narrators who came to study in his halaqah such as Mus’ir and Mandal. Regarding the claim which states that he contradicts hadiths, then the amount is too little and he did not purposely contradict hadith in issuing his opinions.” (Refer Al-Anwar al-Kasyifah, pg. 52)

In short, the fame and contributions of Imam Abu Hanifah al-Nu’man bin Tsabit is acknowledged by scholars throughout the ages. His mastery in the science of hadith is comprehensive from the evaluation on narrators (the knowledge of rijal hadith) and fiqh as well as understanding in hadith.