IRSYAD AL-HADITH SERIES 498: THE ENCOUNTER OF IMAM AHMAD AND A BAKER 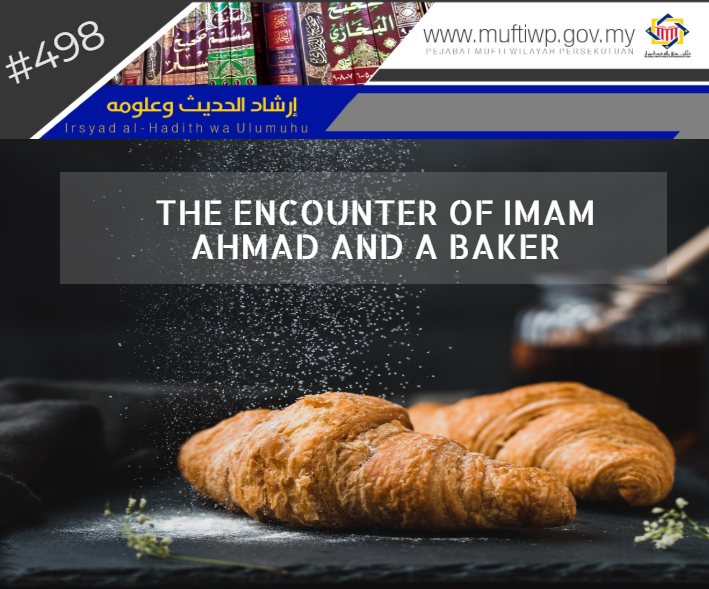 I have a question. Is the narration that there was a baker who had the chance to meet Imam Ahmad bin Hanbal due to his istiqamah in reciting istighfar sahih? Some said that this story is cited in the book Manaqib al-Imam Ahmad bin Hanbal by Ibn al-Jawzi. Hope for an explanation pertaining to this matter.

Imam Ahmad bin Hanbal is a renowned name in our society. He is an imam of ahl al-sunnah and a scholar who is known around the world. His knowledge and honor is irrefutable. This can be seen through praises and acknowledgements from other scholars to him. Among them is the acknowledgement from Muhanna’ bin Yahya towards Imam Ahmad where he said:

“I never saw a person who is gathered all goodness inside him other than Ahmad bin Hanbal. Indeed, I have met Sufyan bin ‘Uyainah, Waqi’, Abd al-Razzaq… and many other scholars. However, I’ve never seen (not even one person) like Ahmad bin Hanbal in his knowledge, comprehension, asceticism and piousness.” (See Manaqib al-Imam Ahmad, pg. 189)

A Story of a Baker Meeting Imam Ahmad

It is undeniable that the story of a baker meeting Imam Ahmad bin Hanbal is widely spread either through religious writings or the speakers’ table. In short, it is said that Imam Ahmad was on his journey and he stopped by a town. He wanted to have some rest and sleep in a mosque, but the mosque authorities prohibited him to do so and asked him to leave. The mosque keeper does not recognise Imam Ahmad. Then, Imam Ahmad went out and intended to lie down around the compound outside of the mosque, but is still prohibited by the keeper. From afar, a baker, who saw the incident, called him when he passed by his shop. He greeted Imam Ahmad and invited him to get some rest in his place. Imam Ahmad still only introduced himself as a musafir (traveller). During his stay at the resting place prepared which is close to the baker, he heard the baker always recite istighfar. During all of his action of making the bread, he recited istighfar. Imam Ahmad asked the bread seller: “What is the outcome of your doing?” Then, the man answered: “All my wishes are granted, except one which is I asked Allah for me to have a chance meeting Imam Ahmad.” Upon hearing the answer, Imam Ahmad said takbir and say: “I was brought here due to your istighfar”. The man praised Allah, for his wish has finally come true.

Coming back to the question asked, we did not find any story of Imam Ahmad and a baker as mentioned above in Manaqib al-Imam Ahmad by Imam Ibn al-Jawzi. Also from other accredited books. In fact, Prof Dr Umar bin Abdullah al-Muqbil also states that this story is of no origin from any books of al-Tarajum and al-Manaqib. Especially books which narrates the biography of Imam Ahmad bin Hanbal like Manaqib al-Imam Ahmad by Ibn al-Jawzi, Tabaqat al-Hanabilah, Siyar A’lam al-Nubala’, Tarikh Baghdad, al-Bidayah wa al-Nihayah and other books which state on the life of Imam Ahmad. [2]

However, we found a story which is closely alike with the above one. It’s just that the story is not of him with a baker, but Ishak bin Rahawayh. Imam Ibn al-Jawzi cited the narration from Abdullah bin Ahmad which tells that when his father was freed from Mihnah (on the issue of khalq al-quran). He worried that Ishak bin Rahawayh (had first) came to meet him. Therefore, he went to him. When he reached a town named al-Rai, he entered the mosque. At that time, it was raining so hard. When the night comes, Imam Ahmad was ordered to stay out of the mosque because they (the mosque keeper) would like to close it (lock it). Imam Ahmad said: “This is the house of Allah and I am slave of Allah.” Then, the keeper said to him: “Which one do you favour; we drag you out or you walk out yourself?”. Imam Ahmad then gave salam to him and went out of the mosque while the rain was still pouring heavily along with the thunder and storm still raging on. He did not know where to go. Then, a man gone out of his house and asked Imam Ahmad: “O brother, where are you heading to on this time?” He answered: “I do not know where to go?” Then, the man said to Imam Ahmad: “Come in!”. And he gave him some fresh clothes to change into and removing his wet clothes. Then, Imam Ahmad took ablution to perform prayer. Then, Imam Ahmad was served with foods and invited to have dinner with them (the man and his family). He sat down to eat with them. The man asked Imam Ahmad: “Where were you from?”. He answered: “I am from Baghdad”. The man asked again: “Do you know a man named Ahmad bin Hanbal?” He answered: “I am Ahmad bin Hanbal”. And the man then said: “And I am Ishak bin Rahawayh”. (See Manaqib al-Imam Ahmad, pg. 512).

Imam al-Zahabi evaluated the story as a fake narration and criticizes Imam Ibn al-Jawzi to put such (in his book). (See Siyar A’lam al-Nubala’, 11/321-322)

Based on the above discussion, we conclude that the story of a baker who got to meet Imam Ahmad bin Hanbal due to his istiqamah in reciting istighfar is of no origin. In fact, it is also supported by Prof Dr Umar bin Abdullah al-Muqbil who stated that this story is of no origin from any books of al-Tarajum and al-Manaqib. However, there is a very similar story, but not related to Imam Ahmad and a baker. It was between Imam Ahmad and Imam Ishak bin Rahawayh, and Imam al-Zahabi evaluated this story as fake in his book.

Still, it is undeniable that there are various verses of al-Quran and sahih hadiths which state on the virtues and advantages of istighfar. Therefore, let’s be steadfast in reciting istighfar and make them as the dhikr we practice in our daily life. May Allah SWT make us be among His slaves who often recite istighfar (asking for forgiveness from Him). Ameen.

[2] See the official website of Prof. Dr. Umar bin Abdullah al-Muqbil, Lecturer in Universiti al-Qassim, on the question entitled Is it sahih the story of Imam Ahmad bin Hanbal with the bread seller? (http://almuqbil.com/web/?action=fatwa_inner&show_id=2134). Accessed on 17th April 2020.